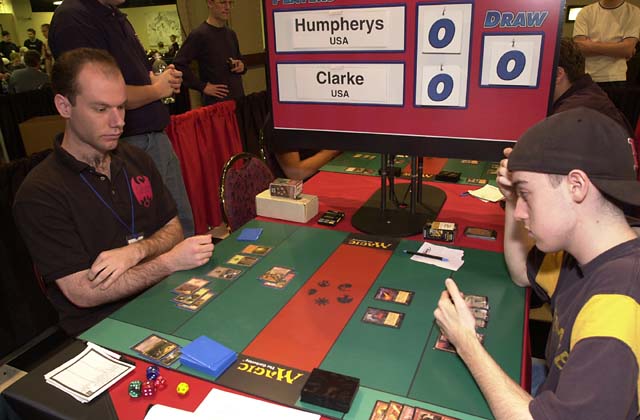 Dave Humpherys (Your Move Games) and Nate Clarke (currently unteamed) met in this match-up of name players to...

...excuse me, Michelle Bush has just interrupted this report to inform this author and the rest of Sideboard staff that she is the "Black Cloud" of Magic reporting. More on that later...

Anyway, as we were saying, we had two name players. Thus, featured match. Good enough for you? Let's roll.

Dave won the roll and played first; both players kept their hands. The first two turns were quiet, but by the end of Nate's turn, a Llanowar Cavalry and Viashino Grappler were growling across the red zone at each other in a Death Match of Mediocre Creatures. After the Cavalry activated its broken ability and swung for a mighty point of damage, a slightly more impressive Kavu Aggressor joined the Grappler on Nate's side. Both attacked at the earliest opportunity. Dave's Cavalry bested the Grappler, of course; but then a Tribal Flames finished them off.

Before momentum could really swing to either side, Dave dropped a Swamp (now showing four colors) and smashed both Aggressor and one of three Mountains. 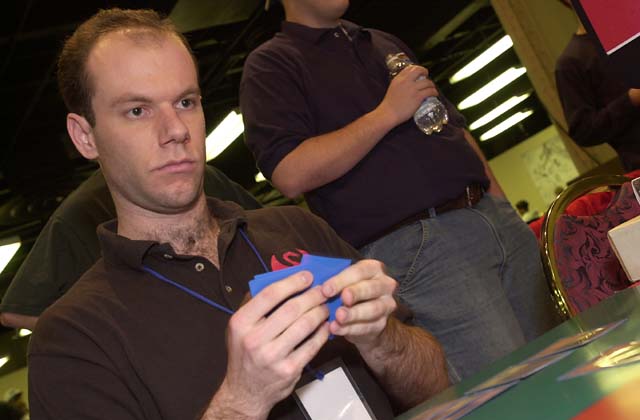 Nate dropped a Swamp and laid out a Nightscape Apprentice, Dave responded with a 4/2 Kavu Scout. Nate tried a Firescreamer, but before these creatures even really had a chance to form a stand-off, Dave cast Armadillo Cloak on his Scout and came rushing over to create a 23 - 13 life advantage.

Looking at his lands the following turn, Nate probably regretted having only two mountains left, as he did not have enough red mana to both pump his Firescreamer to four power AND give it first strike with the Apprentice. He opted instead for an Ancient Kavu and hoped it would be enough to discourage Dave from attacking.

It was not. Dave played Smoldering Tar, and then balanced the options of letting it sit there for thirteen turns and slowly tick away Nate's life, or sacking it and getting rid of the Ancient Kavu so he could end the game in about two turns. Playing disturbingly quickly given his reputation, Dave chose the latter option, and then cast Tribal Flames on the Firescreamer. Another swing with the Scout, and the life advantage was 29 - 7.

Nate didn't draw a Mirror Universe, so a second Armadillo Cloak on the Scout finished off the game on the following (tenth) turn.

Nate chose to play first; both players kept their opening hands. Once again, a gripping early showdown took place, this time between a Rogue Kavu and a Viashino Grappler. (The author is highly disturbed by the recent rush to Viashino Grapplers and Urborg Phantoms as paths to victory. When, the author wonders, did these creatures become good? Why did no one tell him? In any case, he can only hope that Planeshift will modify Pro Tour tech such that he never has to report on these kinds of creatures again.)

The two creatures punished each other out of existence; and soon Dave had another creature with an Armadillo Cloak -- this time a Llanowar Knight, which spelled bad times for Nate's red-black deck. 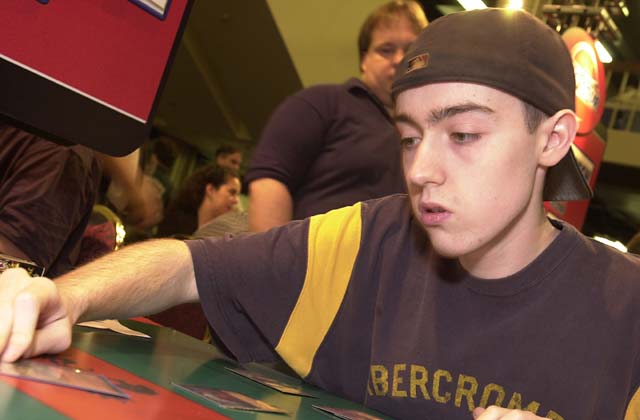 Back to real time. This author, fresh as a daisy after this fifteen-minute match, then waltzed by the match where Michelle Bush was reporting and let her know that her attempt to avoid another long, drawn-out match by her colleague was futile. Turns out the match she reported on almost got called on time (before Steve OMS...aw, now, no cheating; you'll just have to go over to her report to find out...).