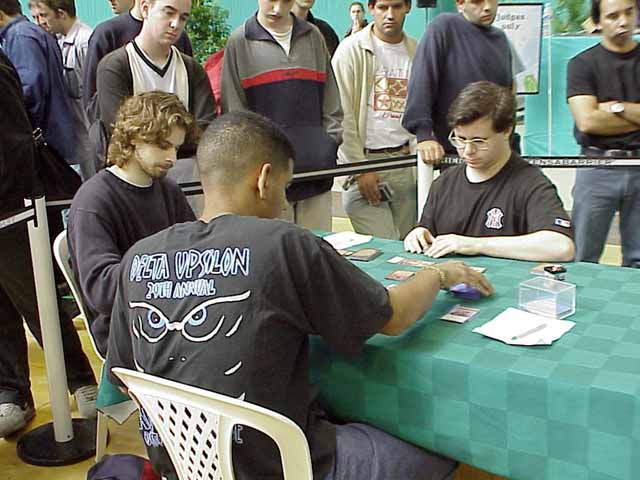 Dave has a strong rebel chain with 2 Sergeants, Steadfast, Lieutenant, Vanguard, Nightwind Glider, Lightbringer, Lawbringer and 2 Trenching Steeds. Unfortunately for Mike this is fantastic against his red/black deck.

Mike wins the die roll and elects to play first. He knows that Williams only has one 2cc searcher, so he is pleased to be able to Viscious Hunger it on turn three. To his dismay Dave has also drawn the Vanguard, but a Cinder Elemental kills it before it can wreck him, although a Lawbringer is brought into play first. Meanwhile a turn 4 Airship is trying to race a Keldon Beserker so Pustilnik has the 16-10 life advantage.

When Dave then casts his Wandering Eye, their hands are revealed: 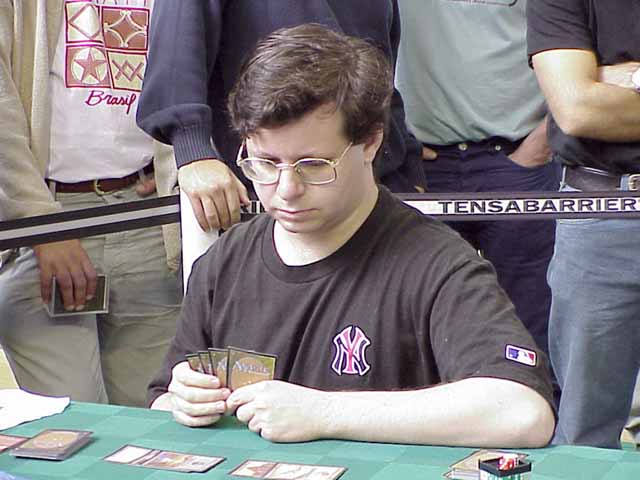 As the Airship comes in again they both know this match was going to be a struggle for the red/black deck now as Alexi can just bounce it's way to victory. Sure enough Mike fails to draw an answer for the Legend and his creatures are boinged.

They both sideboard in just one card. For red the Brutal Suppression was inserted whilst Williams replaced a Rootwater Commando for an Excise. Excise is not a great card normally, but against a red player that has to tap out reasonably often and sacrifice land this spell becomes optimal.

Again Mike begins and the permanents start hitting faster this time. Yet again Williams has drawn his Lieutenant and this time Mike has no fast answer. Meanwhile a Ramosian Sergeant is nipping in for a cheeky 2 whilst a Cackling Witch chickens out of blocking. The two finally trade off on turn 5 and then Mike makes a bid to screw his opponent with a Devastate, but Dave draws his fifth land and manages to search out a Lawbringer (which immediately kills a Cinder Elemental) and a Vanguard. A turn 4 Divining Griffin has been serving for 2 for a while now - so it gets its Soul Severed, a Wild Jhoval is made and the Defiant Vanguard gets the CLAP, but it draws out the Nightwind Glider in response. 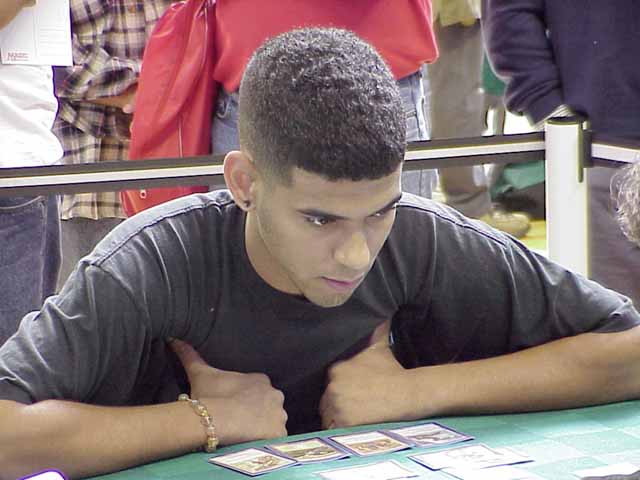 The board situation is now Dave with a Nightwind Glider and a Lieutenant and Mike with a Wild Jhovall. The life scores are 19-11 respectively. The Oraxid then hits and all Mike can do is watch as both the Oraxid and the Glider roll on over for 4 a turn as all he draws is land and red creatures. Just to take the piss Dave lays out a Defender-en-Vec and an Alexi to force the concession. At one stage in this game he had 3 more permanents than Mike and 5 more cards in hand.