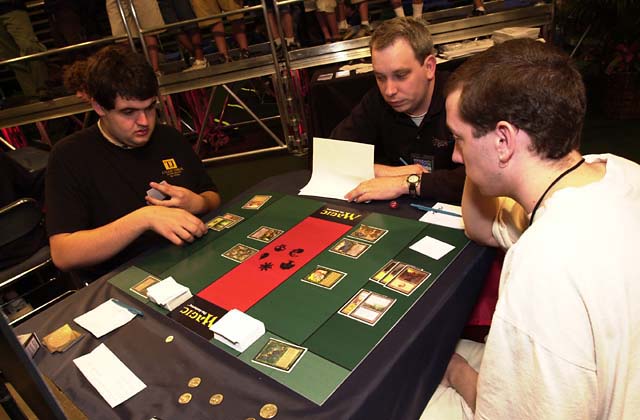 Two of the current giants of the game met in round seven to play one of the several hundred Fires mirror matches that were happening this weekend. "The King of Beatdown" David Price was matched up against William "Baby Huey" Jensen, with the winner moving on with a 7-2 record in good position for Top 8. The loser would have to win out and hope for his tiebreakers hold up.

Price won the roll and elected to play. Both players drew one-land opening hands; Price's lone mana was a mountain, so he wisely chose to mulligan. Jensen had a City of Brass plus an Elf, so he kept, hoping to draw more land soon.

Price's new hand let him start off traditionally, forest-Elf. Jensen matched Dave's Elf, and drew a mountain that let him cast a turn-2 Yavimaya Barbarian (this tournament's surprise hit). Price one-upped Jensen by summoning the 5/5 beatstick Blastoderm and looked ready to go on the offensive.

But Jensen cast his own Blastoderm, and the two beasts merely traded.

Both players cast Saproling Bursts on their next turns, and the stalemated board position meant that neither of them could afford to flinch, so no tokens were created during either players' endstep. Price cast Fires of Yavimaya on his fifth turn, and Jensen matched it on his turn. Price then played another Fires, and in keeping with the eerie symmetry, Jensen also cast a second Fires. The Bursts were fading fast, and neither player had taken too much damage aside from Price's occasional Porting of Jensen's City of Brass.

But then Price made his move, and cast a Shivan Wurm, which he hoped would run over any blockers Jensen could muster. Jensen summoned a second Barbarian and braced himself for the impending attack.

As expected, Price sent the big ol' Wurm into the Red Zone along with a little Elf sidekick. Jensen thought for a moment, but it was obvious that he already had a plan. He pulled one of the last two tokens off his Burst, and quadruple blocked the Wurm with two Barbarians, and Elf, and the 1/1 token. He then sacked one of Fires on his Elf, forcing Price to sack one of his, making the Wurm 9/9. Damage then went on the stack, and Jensen's Urza's Rage meant that not even using the second Fires would be enough to keep the Wurm around. The board was now completely 'empty aside from a pair of Fires, a pair of depleted Saproling Bursts, and Price's lone Elf.

Jensen changed all that by making a new, fresh Burst on his turn and immediately attacking the disappointed Price with three 4/4 tokens, taking him to 8. Price had no play on his turn, and Jensen put a stamp on the game by summoning a Blastoderm to join the tokens in finishing Price off.

Price started game 2 off slowly, and his first spell was an Urza's Rage aimed at one of Jensen's two Elves. Jensen had missed his third land drop, so when he started flicking his hand around on his fourth turn, Price couldn't contain himself. "Come on, Billy, don't play a land!"

Jensen just looked up and laughed, "Who says, 'Don't play a land?'" Price then explained that everyone thinks it, but he just happened to say it out loud there. Jensen denied ever wishing bad things on opponents, played a Rith's Grove, and summoned a Blastoderm.

Price, whose ill wishes were not slowing Jensen down, tried more traditional methods and killed Jensen's other Elf with a kicked Thornscape Battlemage. The 'Derm and the Mage traded hits, and then Price added a Fires to the table. 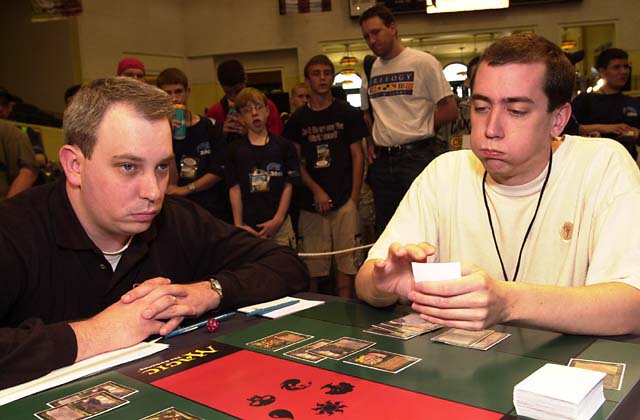 On his next turn, Price went for the throat, casting Burst. If Jensen had an Aura Mutation, Price certainly would have lost. But it was not to be, so three large tokens joined the Battlemage and knocked Jensen down to single digits.

Jensen managed to stabilize, however, by casting his own Burst and then killing David's Battlemage with a Flametongue Kavu. But the new stalemate didn't last long, as Price topdecked an Aura Mutation, aimed it at Jensen's Burst, and then accepted Huey's concession.

Both players had slow developing opening hands for game three. They each played lands and said done, but Jensen drew an Elf and played it on turn two. He followed it up with a turn-3 Fires and a second Elf on turn 4, then attacked for two.

Price, who had done nothing to this point except Port Jensen a couple of times, played a turn-4 Blastoderm. Jensen did nothing on his fifth turn, which made Price suspicious. Dave attacked with the 'Derm, and then cast a Fires and a Bird.

As expected, Jensen killed the Bird with a Flametongue Kavu he'd been holding, and then attacked Price for six. He ended his turn with a forest and a City of Brass untapped - he'd used his Port for mana - which meant he had an Aura Mutation in hand.

Price called his bluff and cast Rith. Rith plus the 'Derm plus the Fires would have done the thirteen points necessary to reduce Huey to exactly 0, but Jensen wasn't bluffing. He Mutated Price's Fires in response to his attack phase, and Price fizzled the instant by using the Fires on Rith. He then swung with the 'Derm, reducing Huey to 8. 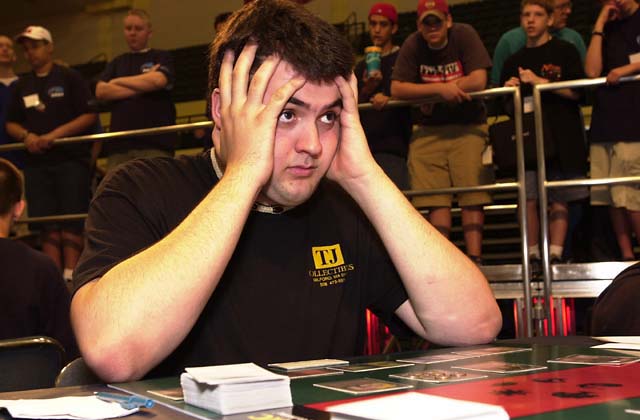 Jensen had no way in his hand to deal with Rith, and he let Price know it. "I'd like to draw a good one here," said the big man, and then he proceeded to pluck. . .

. . .Saproling Burst. Price deflated in his chair. Four 3/3 tokens and a Flametongue Kavu entered the Red Zone, and Price was reduced to 0.

After the match, onlooker Zvi Mowshowitz openly questioned Price's play of Rith as opposed to killing Jensen's Flametongue with his own, which would leave up GW for Aura Mutation. Price defended his choice saying that he knew Jensen didn't have the Burst, and if he was only bluffing the Mutation, the game was over. Jensen agreed that Price's move was correct, and then the two competitors wished each other luck and headed off.