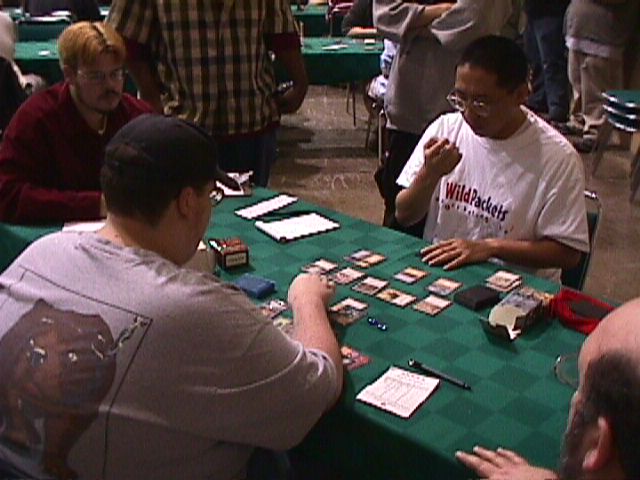 Eric Froehlich vs. Bin ChenThese two players entered round nine looking to solidify their own positions and run at the coveted top eight spots. Eric Froehlich has expirenced top eight success many times before, most recently with A Little Too Sick. His team of Kamiel Cornelison, Kyle Rose and the aforementioned Froehlich placed in the top eight of Grand Prix Columbus and Pro Tour New York this season. Bin Chen, the local homeboy, however, is coming off a retirement of sorts. Having quit the game for almost two and a half years, he has decided to try and chase the glory and money of the Pro Tour again.

Both players approached the feature area, and were awarded with a two-minute extension from Head Judge Thomas Pannell. Not much was said between the players during shuffling, and after rolling high on the twenty, Eric decided to play first. 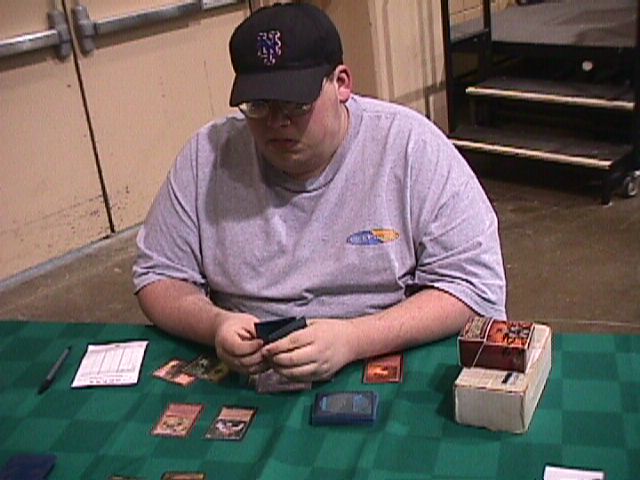 Eric FroehlichEric drew first blood with a second turn Werebear. Bin, not to be outdone, played the powerful Hallowed Healer on his third turn, and it seemed if things had stabilized quite nicely. A rather dull Elephant Ambush was played a turn later by Eric, but Bin had yet another Healer to answer.

Play went back and forth for a few turns. Eric would attack, Bin would prevent all the damage being dealt. There were not many possible ways for Froehlich to deal with the healers, but when he drew his card for the seventh turn, things took a turn in his favor.

The much-maligned Bomb Squad came to town, lighting fuses underneath the feet of the Healers; Eric soon had the damage prevention problem back under control. Eventually, the fuses kept getting lit, and most of Bin's creatures were feeling the effects of the bomb! With out many answers to the squad, Chen was forced to sacrfice his Abandoned Outpost, to cast the bomb, Persausion. Taking control of the Bomb Squad, Chen looked to gain some vengence for his dearly departed Healers. Things were not to be that way however. During Eric's next attack phase, he turned his little men sideways, cast Sylvan Might two times, and Reckless Charge once. This move knocked Bin down to five life. He calmly entered his second main phase, and cast Liquid Fire, targeting a random critter for zero points of damage, and Chen for the full five. 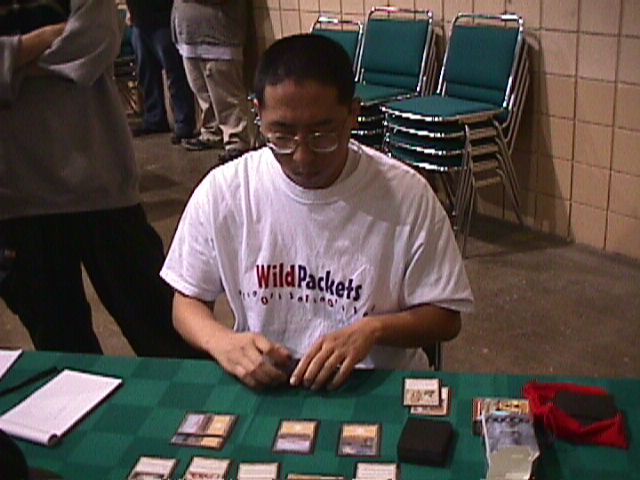 Bin ChenBin decided to draw first since his blue/white deck was quite slow. Both players kept their opening hands for the second game, and this time it was Chen who got the blazing fast start. His second turn Patrol Hound smashed the face of Eric for four damage before Pardic Firecat rescued Eric from impending doom. Eric was still having a bit of mana troubles, and his next play was the sixth turn Crashing Centaur. At this point in the game however, Bin Chen stopped playing land, not because he wanted to, but because he had no access to any. Stalled at four land, Bin was unable to play any of the good cards that he had, and soon, the local boy was being overwhelmed by the seven time Prerelease champion. The game and match ended after Eric attacked with his elephant and beasts token, firecat, and Krosan Avenger.