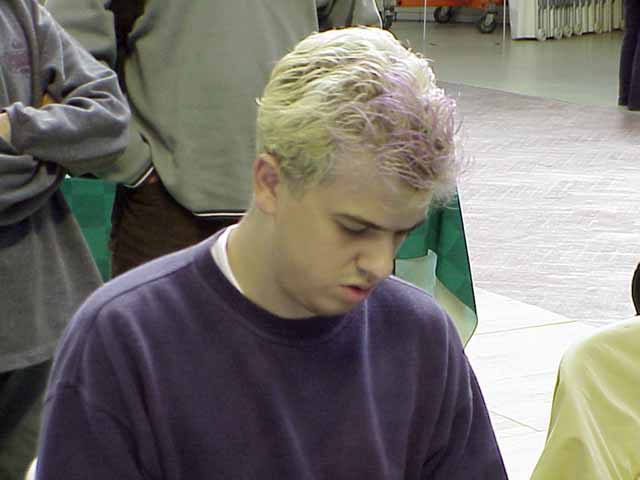 Way down there at table 23 I found a couple of great players trying to start a comeback. Frederico Bastos is the current Portuguese champion and has been ripping the national scene in shreds since he came back to regular play. In the other corner, fresh off a World's final and a Player of the Year award, Bob Maher. So this match-up had all the right ingredients for a great round.

And indeed it was an amazing round, a perfect example of what Magic should be, regardless of the tournament level. After some friendly chat and a brief discussion about their drafting pod the round got under way.

Bob came out strong with a Kris Mage and a Seal of Fire while Frederico dropped a Snapper. Bob tried to get rid of it by sealing it during Fred's upkeep but Fred opted to burn for three. They both took a couple of turns to drop some creatures and set up a large lock. Fred probably thought he had the answer when he dropped a Belbel's Percher but Bob just used a Rhystic Lightning to clean the threat. Bob decided to test the waters and send in a Grappler and R. Rager and Fred traded the Snapper for the Rager. The game then seemed to settle a little with Fred dropping a Death Charmer, while Maher found a second Flowstone Wall. Bob couldn't help but smile when he finally found a Swamp, used a Vendetta to remove the Horned Troll and traded a Grappler for a Snapper.

Fred tried to regain some control of the game by despoiling the Swamp but couldn't find any decent back-up. Bob didn't even seem to slow down as he played creature after creature using only red mana. Fred finally found a Blastoderm to slow down the massive bleeding and a Bargaining Table to find some answers but it was too late. After some irrelevant turns Bob found a Gerrard's Irregulars to add insult to obvious injury.

The friendly chat continued as both players sideboarded and shuffled for the second game. Bob opened up with a Seal of Fire and Fred answered with a Drummer , which got promptly sealed. Bob dropped a Grappler and Fred found a good blocker on a Deadgazzer. It seemed like a new standstill but Bob had a handful of surprises: Sniper, Rager and an Alley Grifters. Fred's doom seemed imminent as Bob attacked, but with a Steal Strength to get rid of the Sniper and a Tiger Claw to save his Gazer, we seemed to be back in business. 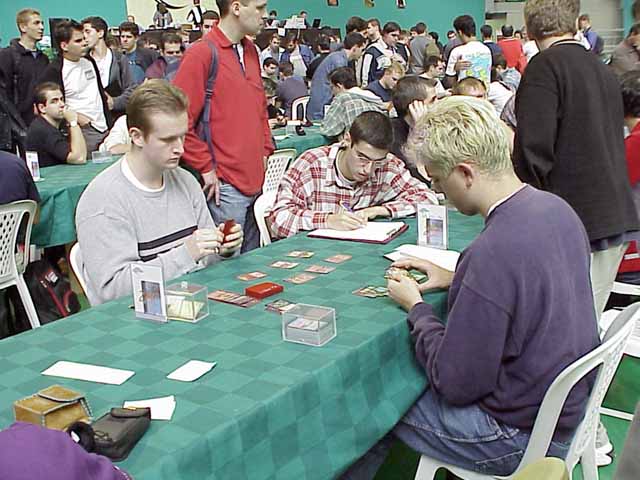 As Bob's army increased, Fred needed an answer and he used a Skyshroud Claim but stopped for a second to think and only got one Forest to keep under eight lands (since Bob had an Avatar of Fury). With that second Forest he dropped a Spitting Spider, but Bob had a wicked plan up his sleeve.

He dropped a Seal of Fire and used a Panic Attack to get his whole army past all of Fred's blockers and finished him with the Seal of Fire.

And so it ends. A great ending to a great round played by two amazing players and rightful ambassadors of the game.