Both players were 5-2-1 going into round nine. 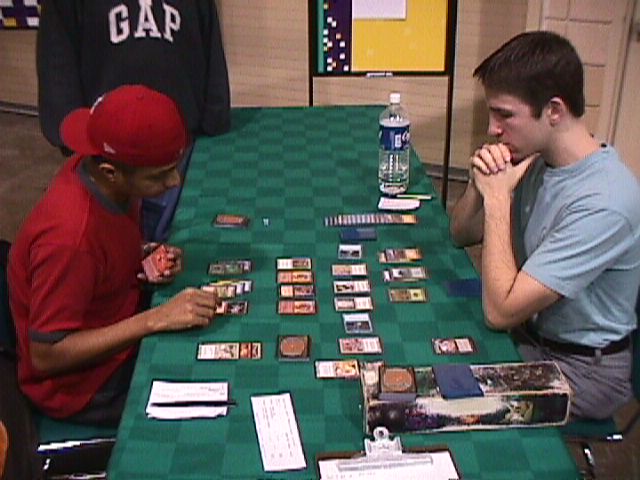 Gerardo Godinez vs. Sol MalkaGodinez is one of the most accomplished players in Mexico. He went to the Invitational last year for being the highest rated player in Latin America. He drafted an aggressive, removal heavy red/white deck that played some black for two Face of Fear, a Fledgling Imp, a Frightcrawler and a Filthy Cur.

Malka is the highest rated limited player in Georgia thanks to several solid high level finishes in the last year. He is also a popular internet writer and a member of the Cabal Rogue mailing list. Malka drafted a blue/white deck that played green for one Mystic Enforcer. Gaining threshold would not be a problem for Malka with his three Cephalid Looters. 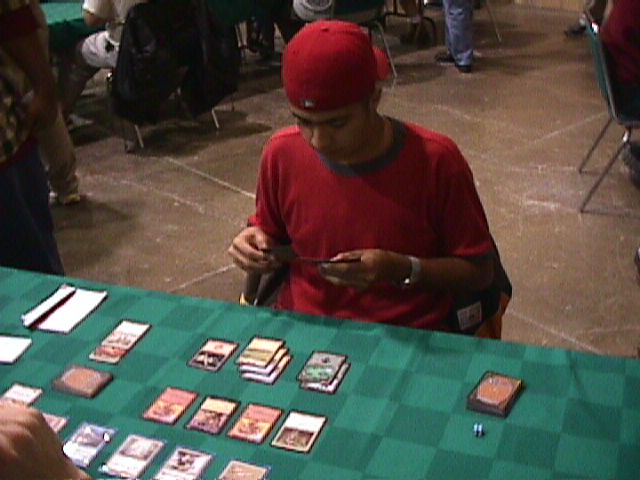 Gerardo GodinezMalka established board advantage early with two of his three Looters, Otarian Juggernaut, a Patrol Hound and the seldom seen Confessor. This gave him an easy to abuse life gain combo with the Looters. Godinez meanwhile sat on a Fledgling Imp and an Ember Beast. Godinez played Thermal Blast on one of the Looters before Malka's combo could get too out of control, but Malka still was steadily gaining one life per turn in a locked board position. Malka played Peek and saw Godinez holding Second Thoughts and Kirtar's Desire. Godinez attempted to Second Thoughts the Juggernaut once Malka goes on the attack, but Malka saves it with an Aether Burst, returning it to his hand. Godinez improved his side with a second Ember Beast. Malka meanwhile played his third Looter and a Hallowed Healer. Malka then threatened to run away with the game by dropping a Mystic Enforcer, but Godinez played Kitar's Desire on it to keep the board under control. Godinez then found the second mountain he needed to Liquid Fire away Malka's Healer. Malka then decided to change strategies and used both Looters on Godinez. "Me?!" Godinez exclaimed. Godinez still had around 20 cards left in his library at this point. Godinez started on the attack knowing that the double Looter with Confessor would be a tough clock. Malka drew Godinez into a Face of Fear and a Frightcrawler. Malka managed to destroy the Face and steal the Frightcrawler with a Persuasion. Godinez looked like he was out of the game, but then he drew Volley of Boulders. Usually a card that is too expensive for most decks, in this case it was a game winner taking out both of Malka's Looters, the Confessor, and Patrol Hound. Malka, seeing his road to victory buried under Godinez's Boulders, conceded the match.

Game one lasted 29 minutes leaving them with only 21 minutes to play the next two games. Malka got an early Looter out and started going to work optimizing his hand. Gerardo had a slow start. His first play of the game was a turn four Mystic Visionary. Malka meanwhile developed further with a Hallowed Healer and an Aven Archer. Gerardo found a Thermal Blast and a Firebolt and finished off the Healer, Archer and Looter. Malka was prepared and played a Mystic Enforcer with threshold. The 6/6 flier was too much for Godinez and Malka quickly finished him. 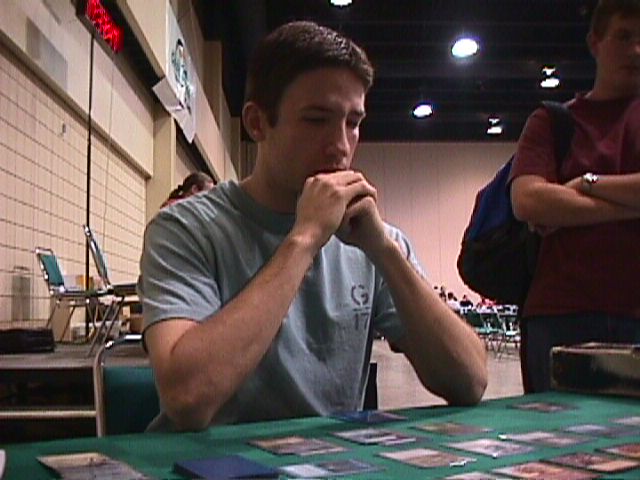 Sol MalkaDespite a fairly swift win, there was only nine minutes left for the last game. Godinez had Malka play first. Malka saw a turn three Healer and a turn four Mystic Enforcer. Godinez was only able to muster a third turn Filthy Cur. Gerardo resorted to land destruction this game by playing Earth Rift and Demolish on Malka's first Island and second Plains. Malka ripped an Island though and played a Cephalid Looter to get himself to more land as well as help him speed to threshold for his Enforcer. Malka played Peek and was very angry to see a Second Thoughts in Godinez's hand for his Mystic Enforcer. This forced Malka to stay back with the Enforcer. With little time left, Malka went on the offensive with his two Cephalid Looters. It was enough of a clock that Godinez was forced to Second Thoughts one of the Looters. The other Looter got traded with a Filthy Cur which left the board clear except for a protection from black Pilgrim and the 6/6 Enforcer. Malka played Patrol Hound to add to the beatdown, but chose to leave it back when Godinez played Aven Flock as a blocker. Godinez was forced to chump with the Flock, but then time ran out and the game went into the five extra turns. Godinez played a Mystic Visionary to chump the Enforcer. At three life it seemed that there would be little way for Godinez to stay alive on the last turn. Godinez ripped a Firebolt and took out Malka's Pilgrim after flashing it back. This left Malka with only six points of damage and Godinez sacked Nomad Stadium (no jokes) to stay alive. However, it is unclear whether the Stadium actually netted him any life in the match since he tapped it at least three times in the game for damage. An irate Sol Malka was left with an unintenional draw.