Round 9 Feature Match - Godinez-Estrada vs. Barbosa 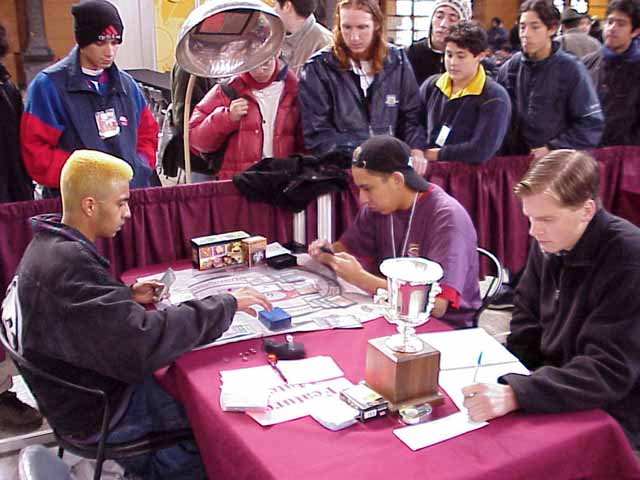 As the afternoon dragged on during the Latin America Championships, the top competitors continued to battle it out to secure a spot in the top 8. Round nine featured Gerardo Godinez-Estrada (6-1-1) versus Francisco Garcia Barbosa (6-0-2), both self-described "random Mexicans" from Mexico City. Gerardo brought to the table a variant on the Angry Hermit deck, while Francisco played Accelerated Blue.

Game one started out slow, with a battle for mana using Fallow Earths and Rishadan Ports. Eventually, Gerardo played Ancient Hydra and began to attack the defenseless Francisco. When Francisco summoned a Masticore, he didn't have enough mana to regenerate and the hapless lion was burned away by Arc Lightning and a ping from the Hydra.

The Hydra ran out of counters, but Francisco was getting dangerously low on life as Gerardo played a Blastoderm. A lucky Daze prevented Gerardo's Plow Under, so Francisco still had an opportunity topdeck an answer to the Blastoderm. He knocked his deck and drew� a Masticore. After waiting for the Blastoderm to fade out, Francisco use the Masticore to quickly win the game. "I kept drawing land!" Gerardo complained.

As game two started, Gerardo played some small creatures as Francisco played three consecutive Accumulated Knowledges. By taking out Francisco's land, Gerardo managed to get some early beatdown and Francisco was at 1 life before using Treachery to regain control.

Gerardo struggled gallantly to deal that final point of damage. He played a Phyrexian Processor and paid a single life, and also summoned a Masticore to his side. But these were no match for the three Thieving Magpies and the Morphling that Francisco had in play. With no way to stop fliers, Gerardo soon succumbed to Morphling beatdown, and Francisco Garcia Barbosa won the match 2-0.