Going into the final round there were two matches that would decide the top 8 as Your Move Games drew with fellow New Englanders Dark Side of the Moon. Antarctica was looking for a draw with Paradox and Paradox was considering it throughout their match until they finally decided to do it. This would guarantee Paradox cash and PT Points. 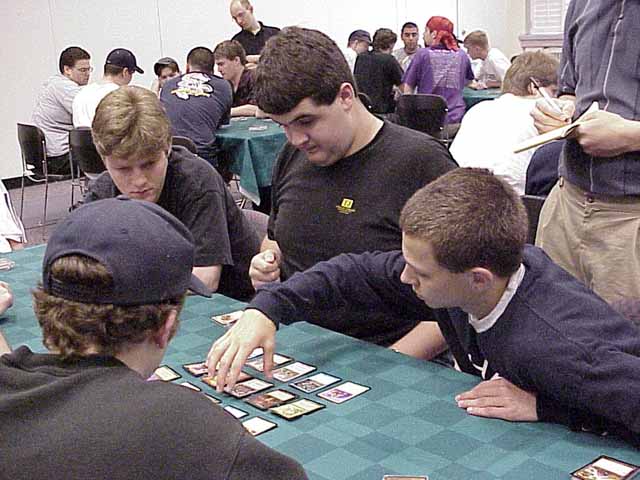 But there was one other match to determine the 4th seed in the top 8. Team "Huey, Ben and Casey" (Bill Jensen, Ben Rubin and Casey McCarrel) was matched against "Tenacious D" (Dan Clegg, Brock Parker and Matt Linde). Clegg was a last minute replacement for Kyle Rose who threw out his back. The individual matchups where Huey against Brock, Linde against Casey and Rubin against Clegg. Rubin and Clegg was the most interesting pairing as it pitted long time associates and teammates against each other.

The draft started with Brock opening a pack and taking Puffer Extract. This was a somewhat questionable pick but it gave Brock color flexibility. Linde scooped the Bouncer showing his plan to go blue from the start. This left Rubin with Cateran Brute, Huey with Irregulars and Casey with Silent Assassin. Clegg took Wild Jhovall and Sustenance showing his like for Red/Green. So likely Brock would go white or black but that was open which was good considering he would be on the bounce in the 2nd pack. His bounce was Rally and Smugglers on the 2nd pack, after Clegg took Blaster Mage, after Casey took Vendetta, after Huey scored Noble Purpose, Rubin Fresh Volunteers and Linde the Breaker. So through two packs Linde was strong on Blue, Clegg on Red/Green and Brock looking toward White and Black given his teammates color choices. It's key to have all the colors covered on your team and Tenacious D was doing this. 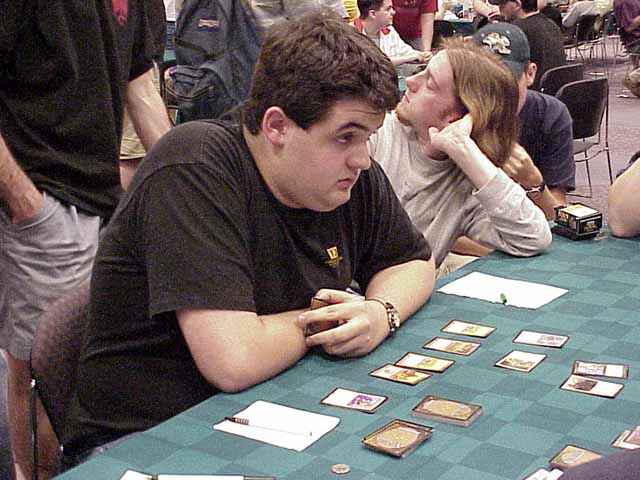 But HBC was in some trouble. Huey was fighting for the White with Ben and Casey and Ben were fighting for the Black. They didn't yet have a Blue Mage given Linde's cutoff of Blue. They were going to let bombs decide who would go blue. Rubin's pack had only good white, red and black as he took Wishmonger 1st and Huey took Thunderclap. Casey stayed with Black with Vendetta. The next pack Huey would snag a Ballista and start to look toward White/Red. The problem was they didn't have a Blue mage as Casey took a Cateran Brute 2nd. The only notable blue cards were Gush snagged by Linde and Rubin's wheel of Darting Merfolk. Casey's 3rd pack yielded the blue bomb they were looking for - a Stinging Barrier, but there was also Snorting Gahr. Green is best in Prophecy and Huey signaled Casey who really wanted the Barrier to take the Gahr. This left the Barrier to Linde at 4 and Rubin as the Blue Mage for their team. This wasn't good as Linde could cut off all the strong Blue prophecy commons from him.

Clegg's Masques Booster (the last) would be the most fruitful. His first pick was Volcanic Winds followed by Brock taking Thermal Glider. The rest of the pack was red and Black cards, with Shock Troops, Primeval Shambler, Lunge and Maggot Therapy. Linde had a tough pick but went with the Shock Troops to avoid fighting an adjacent teammate for a color. He would also be able to cut off Huey in Prophecy. This left HBC with the Red and Black bombs. So after the first pack it looked that Linde would go Red/Blue with Brock White/Black and Clegg Red/Green. Rubin was originally white but had switched to Blue/Black after seeing that Black was only singularly drafted by Tenacious D and that they needed a Blue mage. Huey was Red/White and Casey Green/Black with just the Gahr. He was hoping for the bombs in Prophecy. 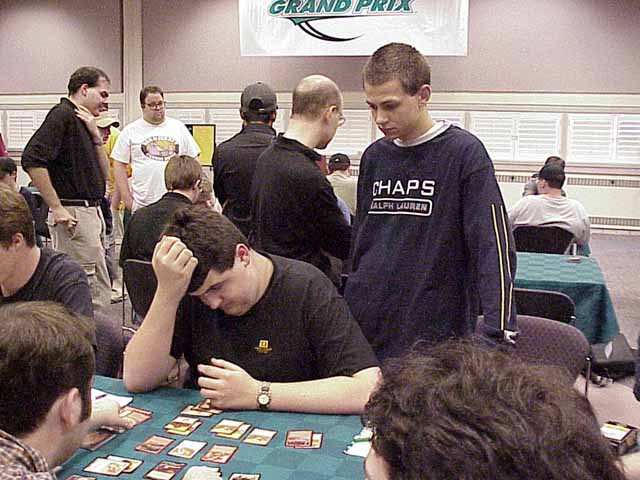 In Nemesis players built up, taking Rebels and Removal as well as bombs like 2 Ancient Hydra and 2 Massacres. Linde was having tough luck getting cut off on the blue by Ben and the Red by Huey on the return pass. Brock's pack, the last in Nemesis, was the most interesting He 1st picked Seal of Doom, passing Clegg Blastoderm. This left Casey with Rathi Fiend to head his Mercenary chain, giving Huey a Crusher, Rubin a Thopter. Linde's wheel was a defensive Defiant Falcon and Cloudskate, but this left Rubin with Trickster Mage and Huey with Avenger En-Dal! 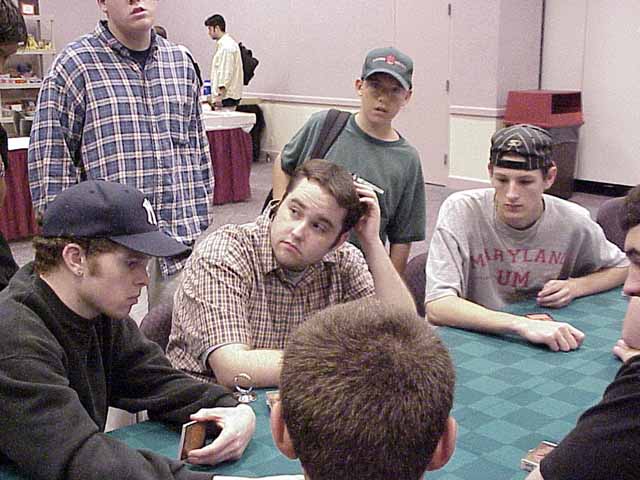 Linde needed a bomb of a 3rd pack as did Casey. They had powerful cards but needed fillers as they had spent picks defensive drafting. Brock's pack is again a bomb for his team. Sure he gets Trenching Steed which is just OK, but Linde gets the best card in the set, Alexi. Casey's pick yielded a Thresher Beast and Huey's green call was looking good. Linde opened a Copper Leaf Angel giving Rubin a Pit Raptor and Casey a Silt Crawler. Rubin then opened up Withdraw making his Black/Blue deck better at racing Clegg. Huey opened Avatar of Fury and quickly went for it, giving Casey a 2nd Thresher Beats. Casey then defensed Latulla from Clegg. Clegg's pack gave him a Silt Crawler but a Vintara Elephant has made it to Casey.

Where Casey and Linde had come in equal, Casey made out like a bandit with Green fat, while Linde was stuck with Quicksilver Wall and the like. Those are the breaks. Huey and Brock both have heavy Rebels, but Brock's Massacre might give him the edge. Rubin and Clegg looks very close but the power of Volcanic Winds could just do it. In all this looks to be a exciting match, likely to come down to the last game. 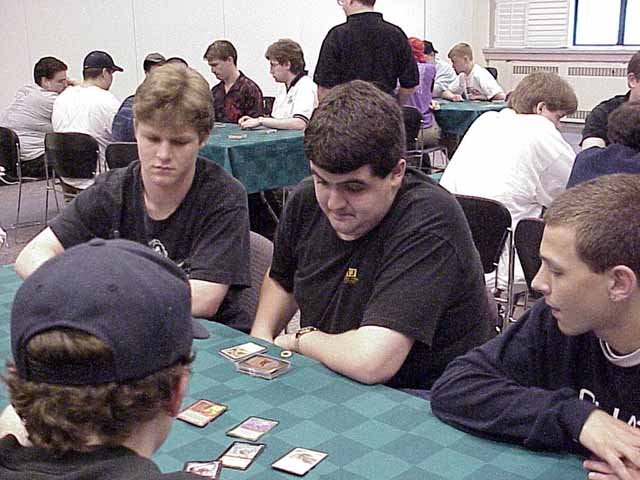 2nd game Linde started fast with Seal of Fire and 2 Cloudskates. Casey started slow with 4th turn Dragonfly, 5th turn Elephant and then Rathi Fiend. Casey went down to 5 from the 6 Cloudskate hits and the Fiend. All Linde needed was a creature as he had Shoving Match in hand and could sneak it by Casey's defense and finish with the Seal. But it wasn't to be as he kept drawing land. 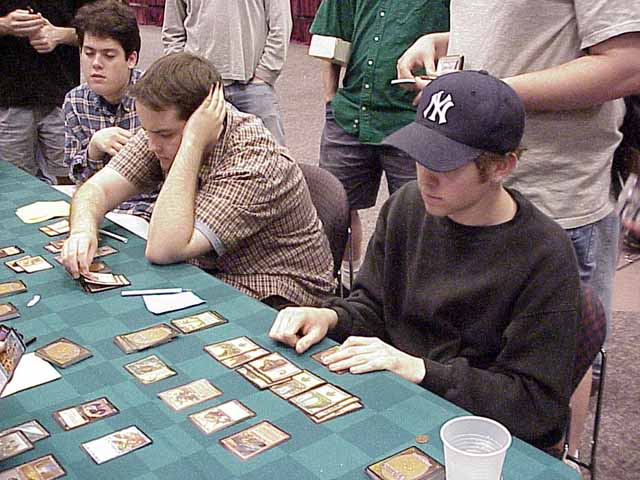 So Tenacious D needed to win the other 2 matches to advance to the final 4. They received a boon when Ben Rubin's decklist was in error - he recorded 2 Stronghold Machinist instead of a Machinist and a Biologist. He was given a game loss meaning that Clegg needed to just win one to get the match. Given the Winds in his deck this seemed likely. In game 2, Clegg lead with Seal of Strength, Spur Grappler and Belbe's Armor, while Rubin answered with Oraxid and went on the offensive with Belbe's Percher and the Shambler. Clegg had to lose his Seal and Keldon Berserker to stop the Shambler. Clegg tried to go on the offensive with Fault Riders, using his armor to stop the flyer. But Rubin played Pit Raptor and Seal of Removal to give him tempo and put Clegg back on the defensive. Clegg drew Blastoderm and it looked like he would punch through with Tiger Claws on the Riders to Trample past the Oraxid. But Rubin had Withdraw. Clegg played Vine Trellis, but Rubin trumped it with Rathi Intimidator, and Clegg couldn't race that much evasion. It would come down to game 3 to decide the match.

Meanwhile Huey and Brock split the first two games. Huey was land screwed in game 1 and only had Mountains. Brock's Despoil didn't help either. Huey tried to stay in the game with Lunge and Clap but couldn't win without Plains and quickly succumbed. Game 2 Huey leads with Defiant Falcon, and Brock plays Seal of Doom but nothing else. Huey searches out 2 Rebels, but Brock's Massacre makes up for the recruits and Brock casts his own Falcon. Huey serves with Irregulars while Brock searches out Thermal Glider. Huey plays Defender En-Vec which allows him to trample over the Glider and keep the Irregulars alive. Brock is coming back with Infantry, Rebels and Nakaya Shade, but Huey plays Barbed Field and starts killing them off. Huey plays a Crusher, but Brock Soul Strings back two Rebels. Again it looks like Brock will stabilize, but a Panic Attack by Huey ends it. 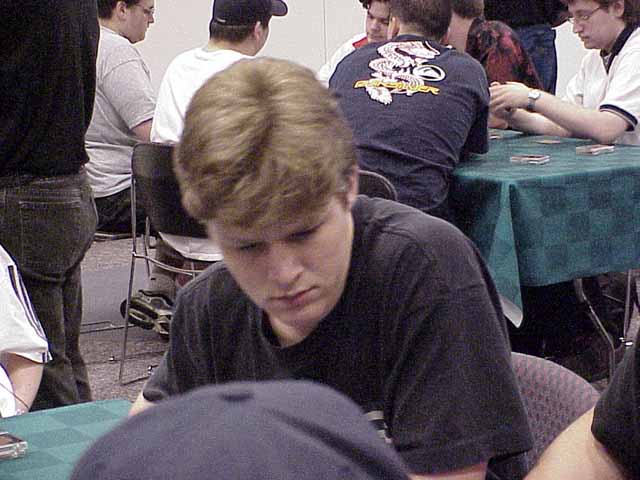 With both matches going to game 3, Tenacious D needed them both, where HBC needed to just win one. It would come quickly as Clegg stayed with a 2 Mountain hand and didn't draw a 3rd land. Rubin despoiled him, leaving him at 1 land! Then Rubin cast Hornclaw. Clegg came back with two lands off the top, casting Vine Trellis and Keldon Berserker, but Rubin answered with Withdraw, Rathi Intimidator and Pit Raptor. A somewhat unfulfilling end to the match, but at least it didn't come down to the Game loss.

The 3rd game between Huey and Brock was really interesting though it had little on the line. Brock just went into swarm mode with Huey on the defense with Avenger-En-Dal. But Brock's 1st pick puffer was too much as even though Huey was killing attackers he was taking lots of damage to do so. Just when it looked that Huey had the board cleared, Brock had back to back top decks of Diving Griffin and Highway Robber that Huey couldn't answer. 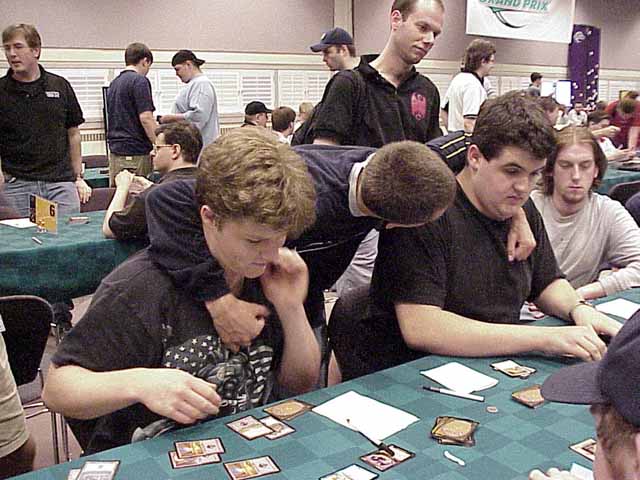 So Huey, Ben and Casey advance to the final 4 with a 2-1 victory. I think that skill wise Tenacious D did better in the draft, but didn't open the bombs or get the late breakers that their opponent's did. Clegg had some back luck and Linde just couldn't get the depth of cards he needed to win. A tough defeat but at least all the deciding matches went to 3 games. Can Huey, Ben and Casey win it all? If so, they'll have to go through Antarctica and Jon Finkel and then perhaps Your Move Games.