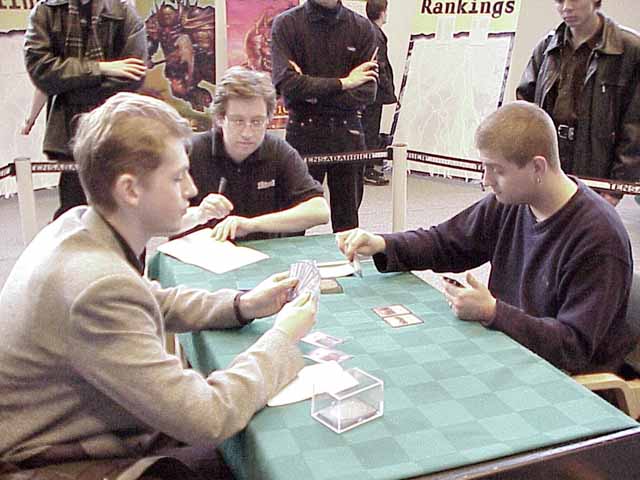 The atmosphere of this match was relaxed and very friendly, While waiting for the judges to perform a deck check, Jakub boasted his knowledge of Russian language by saying a few phrases and almost scoring a date with a Russian female player in the audience. Almost, but not quite.

The deck check revealed no problems and the play began. Slemr drafted a black-red deck that had a problem very common to that color combination - although his removal spells were excellent, his creature base was quite poor. Firsov's fast red-green deck featured both solid creatures and removal.

Firsov started the game by casting a Yavimaya Barbarian and proceeded to remove Slemr's creatures very aggressively, attacking for two every turn. Slemr drew quite a lot of lands and was not coping well with this offense. He was holding Reckless Spite, but Firsov's second creature to enter play was Kavu Chameleon, with green mana untapped, which meant he could always turn the creature black and save it from being Spited.

Slemr cast Firescreamer with enough red mana untapped to take out a huge Kavu, which was now sporting a Maniacal Rage. Firsov had all the answers though. Keldon Necropolis he had in play threatened the Firescreamer.

Slemr was unable to deal with the threats Firsov posed, losing the first game.

Skemr's draw was far better in the second game. He was the one on the offense, casting Viashino Grapper, Firescreamer, and using a pair of Scroching Lava to deal with Firsov's early creatures.

Firsov, who drew more creatures, managed to slow Slemr down, but could not muster an offense of his own. Pouncing Kavu met Slemr's Plague Spores and timely topdeck of a Hypnotic Cloud allowed the champion to take out Firsov's Halam Djinn before it got the chance to enter play.

Firsov kept on drawing creatures. He cast Kavu Chameleon again and it brought Slemr's life total pretty low. Slemr cast a Phyrexian Slayer, emptying his hand. Firsov used a Canopy Surge with kicker to both remove this blocker and deal more damage to Slemr, able to win in that attack phase.