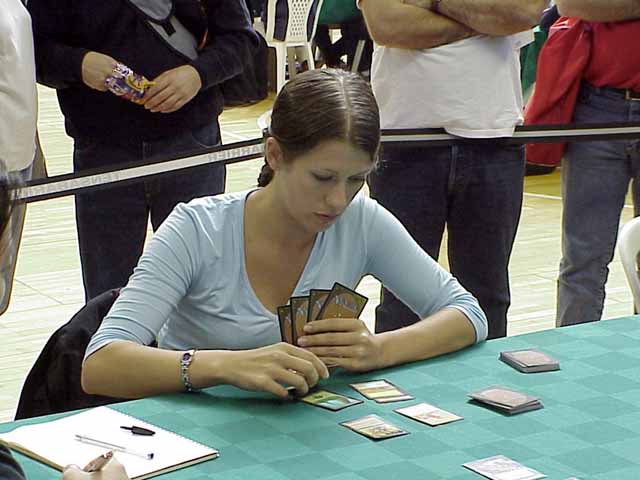 The ninth round pitted the only girl to make Top 64, Canadian Jamie Lynn against Pro Tour veteran David Price. Lynn had a white and green Rebel deck with some green fatties and tricks, while Price was with black and green.

The first game was not very exciting. Price stalled on two lands, while Lynn got out a Ramosian Lieutenant, a Rib Cage Spider, a Ramosian Captain and a Reveille Squad during the first five turns. Feeling the heat, Price dropped two Skyshroud Cutters, putting Lynn at 30 life, and he also cast a Parallax Dementia on the Ramosian Captain to eventually get rid of it.

Lynn searched for a Defiant Falcon, and she kept sending some guys over to pay Price a visit while casting an occasional Critter. David got out a Pygmy Razorback, but over the nine turns the game lasted, he simply failed to draw the third land and eventually he had to give in. 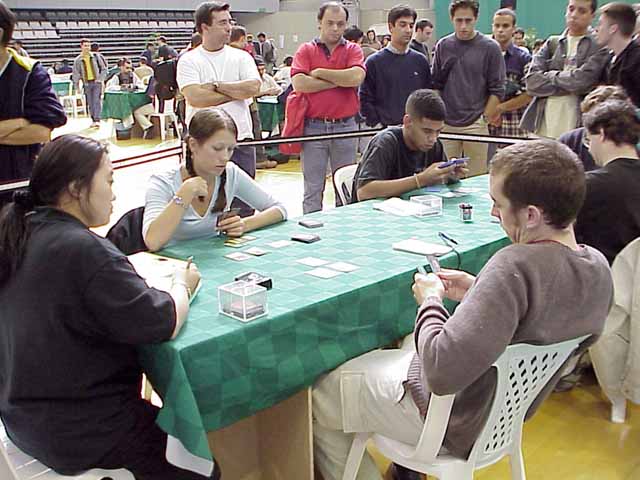 After being horribly mana screwed in the first game, Price got a good draw in the second game. Unfortunately, Lynn managed to stall on three lands. Over the six turns the game lasted, Jamie played a Ramosian Lieutenant that got Snuffed Out, a Fresh Volunteers, a Defiant Falcon and a Soul Charmer.

David on the other hand, dropped a turn two Pygmy Razorback, a turn three Cateran Brute, a turn four Rathi Intimidator, a turn five Giant Caterpillar and a turn six Parallax Dementia to attack for the victory. Simple as that.

The third game was more exciting than the two previous ones. Jamie chose to play, and she got out some early pressure; a turn two Defiant Falcon, a turn three Diving Griffin and a turn four Giant Caterpillar that was turn five Treetop Braced. David answered by playing some removal, the Falcon had to go to Maggot Therapy, and a Seal of Doom wiped out the big Caterpillar. In addition, Dave produced a Caterpillar of his own. 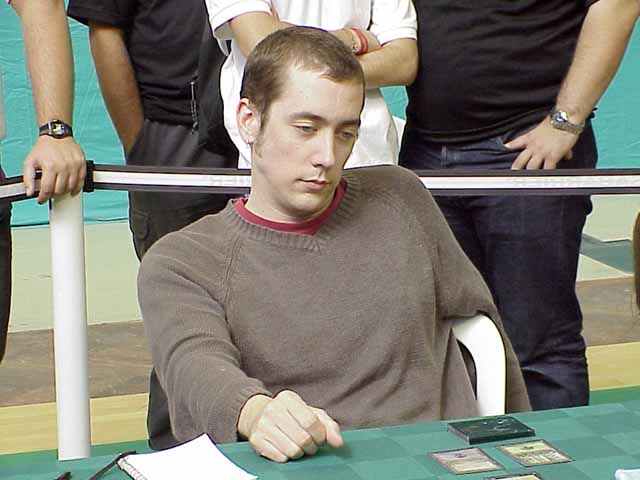 Unfortunately, Jamie didn't have a follow-up to the good start. She summoned a Rib Cage Spider and a Venomous Dragonfly, but that was it. Meanwhile, David dropped a Misshapen Fiend, a Blastoderm and a Venomous Dragonfly of his own. Jamie had taken him down to seven thanks to the Diving Griffin, but suddenly she found herself on the defense as the rather big creatures on the opposite side of the table started attacking.

After blocking the Caterpillar once with the Rib Cage Spider, Jamie chose to block it with the Dragonfly to get rid of it. But the Blastoderm continued hitting her, and when it faded out, David also had a Death Charmer, a 1/1 token and a Volrath the Fallen on his side of the table. For his last attack, he also animated one of his Swamps so that it could join in. Jamie's hand was full of lands, and she died.