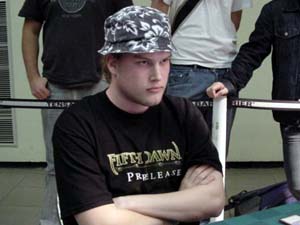 down at 8-0 this morning are two players coming from Germany. Johannes lives near Achen, and Tristan near Frankfort. Johannes is running blue-white control, while Tristan is playing Tooth and Nails with Pyroclasm maindeck, not very helpful in this case. In the other 8-0 bracket, both players, one from Germany and one from Greece are playing Goblins.

Tristan wins the die roll and keeps a rather unspectacular hand with no early action but two Skullclamp, a Tooth and Nail, a Vernal Bloom and lands. Johannes has to paris and gets a decent six card hand.

Tristan's first play is a turn three Wood Elves followed by a Vernal Bloom on the next turn while Johannes can only cast Thirst for Knowledge EoT and has to cast one on his next main phase as well as he didn't draw any lands off the first one. He gets his fourth land on the second Thirst though, and says go all tapped. Tristan doesnt lose time and casts a Tooth and Nail with entwine getting Darksteel Colossus and Kamahl, Fist of Krosia, with a Forest open. Johannes has to Wrath of God losing two lands in the process. Tristan attacks him down to 7, and says go, but his Colossus gets Wing Sharded on the next turn. It doesnt matter though as he has another Tooth and Nail ready to get back his Colossus joined by a Wood Elves this time, and Johannes has to scoop, stuck on four lands, with Worship and Pristine Angel in hand.

Both players keep their hand this time, and Johannes chooses to not leak Tristan's turn 2 Vine Treillis despite having lands and an Exalted Angel in hand. On his third turn, he just plays a Coastal Tower and says go. Tristan plays a land and passes back. Johannes just plays his fourth land, while Tristan casts a Skullclamp and equips his wall.

Once again, Johannes doesnt have a fifth land and just says go. Trsitan has no action either and Johannes gets to cast a freshly drawn Pulse of the Grid on his EoT but he still doesnt draw a land and chooses to cast a Mox and a morph leaving two mana up. Tristan finally casts something as well, a Wood Elves, and gets to draw two cards off it, then plays a Viridian Shaman which gets Mana Leaked.

Johannes just swings for two on his next turn while Tristan can only Clamp a Bird and say go letting Johannes unmorph his Angel. On the following turns, Johannes Leaks a Tooth and Nail, then Leaks a Vernal Bloom still holding two Rewinds, which he uses to make sure neither of Tristan's last two Tooth and Nail resolve as Tristan just shakes his head, disgusted by so many counters even though the game would probably have been even faster if Johannes had drawn more lands in the beginning.

Tristan has to paris a one lander then chooses to paris a 4 lands, 2 Birds hand which seems questionnable as his deck has many good and expensive spells especially after board. His five card hand consists of two lands, a Shaman, a Colossus and a Mindslaver. Johannes' hand is decent with a Pulse, a Worship, a Mox and four lands. 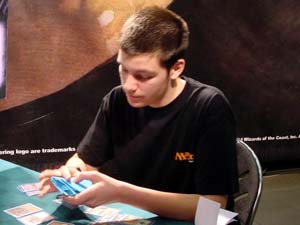 Things don't look too grim in the beginning as Tristan gets to Shaman a Mox away, but its all downhill from there as Tristan once again has no action, stuck with expensive spells in hand, and Johannes casts back to back Pristine Angels on turn five and six via another Chrome Mox, as Tristan can only shake his head and play a Mindslaver. Johannes attacks him down to seven, and chooses to discard a Mox to his Thirst for Knowledge instead of another Thirst and a Pulse, thus giving some options to Tristan, even though its probably irrelevant as he boarded out the Wraths anyway.
Tristan sacs his Mindslver but just scoops next turn as he can't deal with Johannes board.

Even though Tristan's draw were less then impressive, it seems that Johannes deck had a really good matchup there losing an almost unlosable Game 1, as he runs Pristine Angel and Worship main, a two card combo Tristan cant beat at all and proving post board game are fine as well.