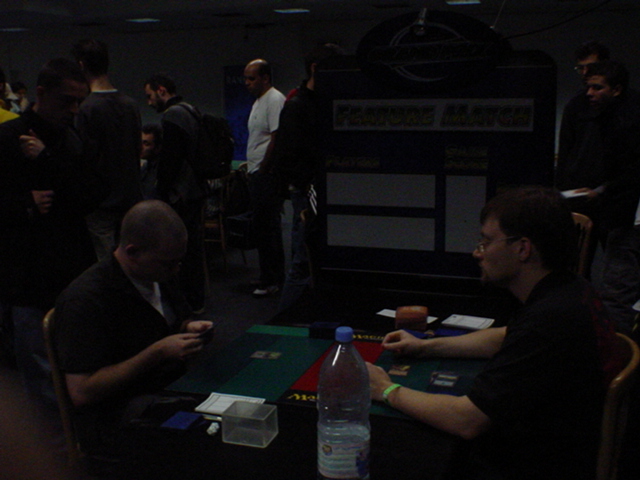 It’s day two and both these players are in with a definite shot of the ever-elusive top 8. John Larkin, hot off a brilliant performance at Worlds, is playing UB Braids, the deck that did him so well in Sydney. Rob Dougherty, former owner of YMG, is playing Quiet Speculation, the most common deck in the field.

After a very lengthy shuffling period and an even longer wait whilst the judges finished the deck check, the game got underway. Rob opted to play first and mulliganed his no-land hand, he stayed at six with 2 Island, Forest, Werebear, Basking Rootwalla and a Roar of the Wurm. John was content with his hand of 2 Swamp, 2 Braids, Cabal Minion, 2 Nantuko Shade and a Shadowmage Infiltrator.

The Rootwalla is the first of many to hit the board swiftly followed by the Werebear and John’s Shade. Rob swung with both his men and John traded the Shade for the Werebear, a very risky decision as Rob was nowhere near threshold. John drew a Darkwater Catacombs giving him access to his secondary colour and made a Finkel.

Rob hadn’t drawn too well, he continued to beat with the ‘walla, taking John to 15, and hard cast an Acorn Harvest, a surprisingly good play considering the two Braids in John’s hand. Not phased, John swung with the Finkel for a card and Rancid Earthed the American’s only Forest. Rob’s minions swarmed back but he failed to make a land and ended his turn. John hit with the Finkel, saw his opportunity and made Braids, going for the jugular as Rob had 3 Islands and 3 creatures. 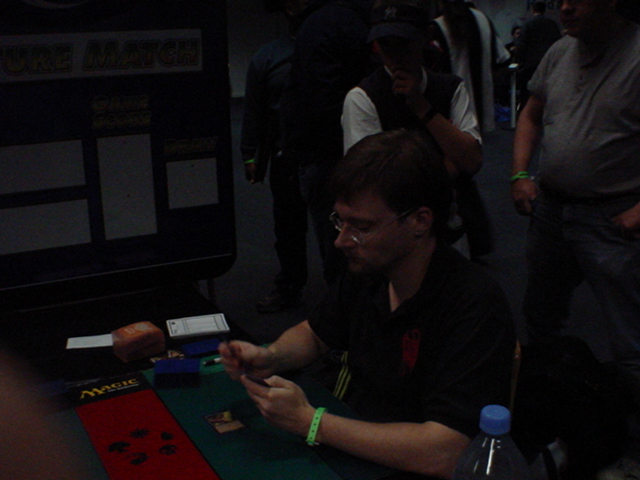 ‘Walla busted out into the open and ripped into John like there’s no tomorrow, pumping twice as Rob went for the extra damage as he couldn’t cast anything because John had stripped away the Nest with his turn two Fiend. Finkel hit the board but Rob had the answer, Wild Mongrel.

John cast Braids and didn’t attack. He had 4 Land, a Fiend, a Finkel and a Braids; Rob had a Walla, a Mongrel and 4 Land. The Walla was sacrificed to be replaced by an Island and a Wonder. John sac’ed a land, made a Shade and passed his turn leaving two Tainted Isles untapped.

The Braids continued to exert its toll of attrition upon Rob and another Island hit the bin. The Wonder flied in over John’s defence knocking him to eleven, a Roar was discarded to the Mongrel and was immediately cast, but John had the Envelop to counter. John sac’ed his Swamp, added mana to his pool and pumped the shade with it. He then alpha striked: his Shade, Fiend, Finkel and Braids all attacked. The Infiltrator died at the hands of a 3/3 Mongrel, Rob fell to 12. John then discarded another Shade and a Fiend to cast Sickening Dreams for two. It cleared everything away except for the Shade, leaving the life totals with John at 9 and Rob at 10.

With no cards in hand, Rob topdecked and played a Mongrel. John attacked for three and made another Shade. The Mongrel swung back for three, discarding a Roar that slipped into play. John was now facing lethal flying damage and had to draw either a removal spell or a land to win; a land would force Rob to trade the Wurm for a Shade, leaving John to go on to win the match. However, it was a Rancid Earth and they move on to the decider.

Both players quickly reconfigured their sideboards, shuffling all fifteen cards into their library so that the opponent is not aware of how many cards are being changed. John put the Bursts back in, swapping them with the Sickening Dreams. Rob, now that he was playing first, removed both Upheavals for extra Envelops.

Both players seemed content with their hands and the game got under way without incident. Rob made a turn two Werebear and John answered with a Finkel. Rob then went on to make things interesting for John by making a Squirrel Nest, effectively annulling any future Chainer's Edicts and, more importantly, any Braids.

John Aether Bursted a newly created Squirrel and Edicted away the Werebear, but Rob calmly answered with a Mongrel, which then got Faceless Butchered. Finkel nips in for a cheeky one point of damage. The game was going to last a very long time, as the Irishman’s card advantage was bogged down by Dougherty’s Squirrels. The game continued for a little while with both players adding nothing of any real relevance to the board. 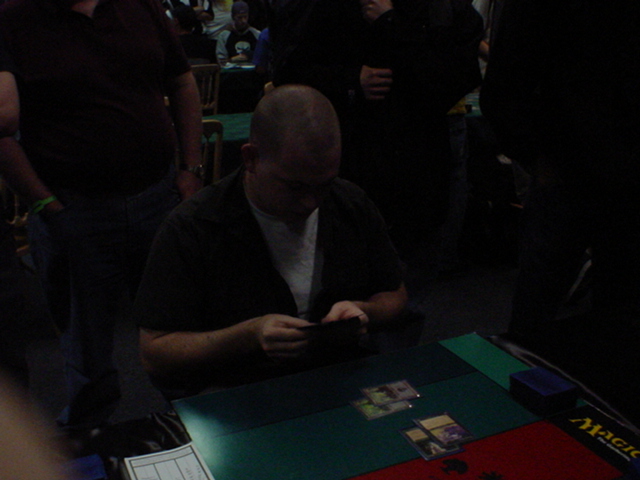 Rob had five land, one of which was enchanted by a Squirrel Nest, a ‘walla, another Werebear and his army of Squirrels was three strong. John had six land, a Shade, a Butcher (hiding a Mongrel) and a Finkel. John had the card advantage leading four cards in hand to Rob’s three. Rob had three cards in his graveyard, so was still far from achieving threshold, but one of them was a Grizzly Fate; John had an Edict in his graveyard.

Rob cast a Careful Study, discarding an Island and an Envelop, signalling a strong hand. This brought him much closer to threshold, he was only a card away. He attacked with what was obviously a sacrificial Rootwala, and John refused to kill it and takes one. Rob then made a second Squirrel Nest, tilting the game dramatically in his favour.

John went on the offensive, with the ever-attacking Finkel being joined by a Shade. A Squirrel jumped in front of the potentially pumping monstrosity. A Mesmeric Fiend took Rob’s last card, a Grizzly Fate.

For several turns, John attacked to keep the Squirrel population down but he still hadn’t drawn the Rancid Earth he needed to destroy a Nest along with all of the Squirrels. Several Edicts and attack phases had left only eight Squirrels but soon there would be enough to threaten John’s life at 16.

Time is called and John emptied his hand of all of the creatures he had been hoarding there. Braids was just a 2/2 at this point but it survived a Squirrel hit. Rob flashed back a thresholded Fate and made a Werebear but he still didn’t have enough monsters to kill John.

The five extra turns passed without incident until the last one. Rob decided to sacrifice a Squirrel to the Braids rather than a Land, removing the possibility of him winning if he were to draw a Centaur Garden and the game finished in a draw.