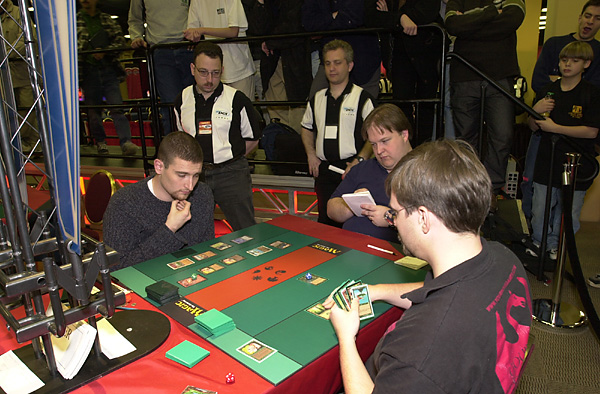 "I seem to remember Jon Finkel losing a match a couple of years ago, but it's kind of fuzzy - it was so long ago." That's the running joke around the Pro Tour venue. The World Champion and, as of to weeks ago, Magic Invitational champion was 8-0 when he sat down to play against Rob Dougherty. He's also won 3 matches in the Masters Series and will take on Alex Shvartsman in the semi-finals of that event this evening. Quite simply, Finkel is "the man." Rob Dougherty is certainly no slouch - the store owner from Massachusetts who sponsors and plays on team Your Move Games was 7-0-1 as round 9 began, in prime position to advance to his third Pro Tour Top 8. Finkel is looking for Top 8 #7. He can't possibly go 22-0 and win $55,000 this weekend, can he?

The matchup with Dougherty was a Fires versus Fires mirror match, more or less. Finkel chose to add white to the deck for Wax/Wane and Rith while Dougherty stuck with just green and red. Another difference is that Dougherty's deck includes much more direct damage, including both Earthquake and Rhystic Lightning while Finkel's deck has only Ancient Hydra. After its breakout weekend at the State Championship tournaments, Fires was considered "the deck to beat" during playtesting for this event. Many players shied away from the deck since it was so expected, but it's been working so far for both Finkel and Dougherty. 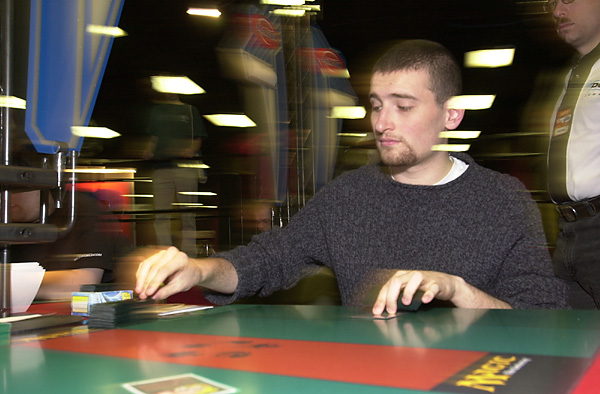 Dougherty won the die roll and played Llanowar Elves. He used Rhystic Lightning on his second turn to kill Finkel's Elf and after Finkel dropped two more he played Blastoderm. Dougherty used Earthquake to destroy each of Finkel's new Elves and then served with Blastoderm. Blastoderm #2 just put Finkel under too much pressure. Finkel had Fires of Yavimaya on the table, but he was way too far behind and Dougherty took a 1-0 lead.

Finkel played a turn 3 Fires in game 2 and had 7 mana on his 4th turn. He used to play Ancient Hydra, kill an enemy Elf, and attack. Dougherty had a pair of Blastoderms, but without a Fires of his own Dougherty was under too much pressure to race and his 'Derms were forced to play defense. Dougherty did stabilize the board with just two points of life left. Dougherty actually surprised Finkel by his willingness to go down to 2, but it's because Dougherty knew that Finkel was playing a version of Chris Pikula's 2nd place deck from the New York State Championships, which was posted on the Internet. Thus, Dougherty probably built it, tested against it, and knew how little burn it had. Finkel ran out of steam with Dougherty at 2 and had to rebuild a new army. A timely Tangle by Dougherty gave Dougherty the turns he needed to attack for the win, but Finkel had a Tangle of his own! Dougherty commented afterwards "That was pretty depressing when you didn't Port me." Dougherty knew Finkel's untapped Forest and Port probably meant Tangle was coming, but he couldn't do anything about it. Finkel thus lived long enough to untap his own creatures and attack for the win. 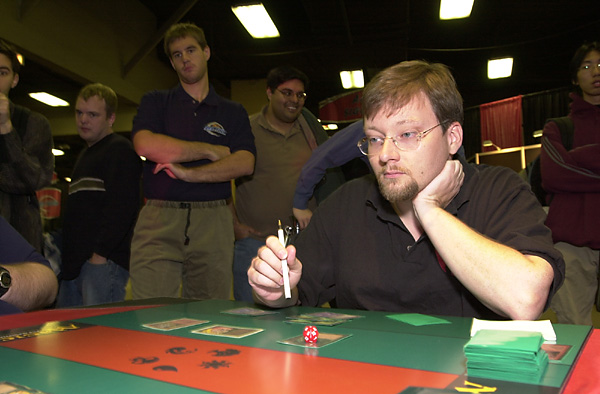 Dougherty started out strong in Game 3 with turn 2 Saproling Burst, turn 4 Blastoderm and turn 5 Blastoderm. If he had had a Fires, Finkel would have had no chance. However, Finkel played a Blastoderm of his own (which wound up trading with a 5/5 Saproling) and then answered both of Dougherty's 'Derms with River Boas. Thus Finkel rode out the storm by regenerating two Boas per turn and minimizing damage. Eveually, Dougherty's entire army faded away. Next Finkel drew a card, smiled, and dropped Rith, the Awakener. Everyone enjoys having Dragons in play, even Jon Finkel. Dougherty bought himself some time with Tangle, but Rith won the game and the match for Jon Finkel.