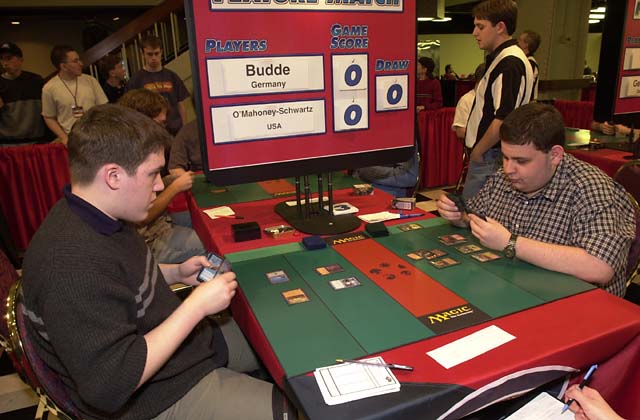 There are Feature Matches and then there are Feature Matches. Round 9 was a clash of titans as Kai Budde met Steve OMS in the 6-2 bracket. Budde is fresh off his PT win in Chicago, and is mathematically in contention to become the first person ever to win back to back professional events. OMS brought the PT Championship title home from the boat two years ago, and is considered to be one of the best Rochester drafters in the world. Budde, OMS, and Jon Finkel - who was playing in the Feature Match next door- are the only three people in the history of Magic to have won three Grand Prix apiece.

Budde has been having a very consistent weekend drafting blue. He went blue/white at his first pod (splashing black for Probe), blue/black and his second table, and blue/black again this time. OMS has been all over the board, first with white/green/red, and then with a base blue deck that included every color but white. "What do you want me to do?" he asked, when I raised an eyebrow at his 4-Color-Blue draft. "I was drafting blue and opened a Darigaaz!" This time he had a more focused red/green/black deck and is hoping to be able to outrace his German competitor.

Game 1 was proof that even the best players can get mana screwed. Budde kept an opening hand of two land and five spells, and never drew another mana source. You know it's an ugly, ugly match when someone casts a Duskwalker without kicker, and Budde was forced to do exactly that to chump block a Jade Leech. Budde was unable to develop any real game, and Steve O quickly ran him over with the Leech, a Pouncing Kavu, and a Crypt Angel.

Budde's sideboarding was aimed at slowing down an early OMS Kavu rush. He brought in Shoreline Raider and an extra Mourning in exchange for Hypnotic Cloud and Ravenous Rats. This was much more of a real game, characterized by aggressive offense from both players. OMS came out a little faster, using extra mana from Quirion Elves to cast and attack with a Pouncing Kavu on turn four. The Kavu steadily dealt 3 a turn, while Budde started to race back with a Duskwalker and a Faerie Squadron. Both players were at 11 life when Budde swung the momentum in his favor with one of the crowning pieces of his deck: Spinal Embrace. In a series of two devastating turns, Budde used the Spinal Embrace to send OMS's Kavu Scout back to his hand and destroy the Pouncing Kavu (gaining 3 life in the process), then bounced OMS's remaining blocker with an Urborg Emissary. OMS was able relay some of his ground defense, but conceded when Budde sent his team to the air with a Sky Weaver. 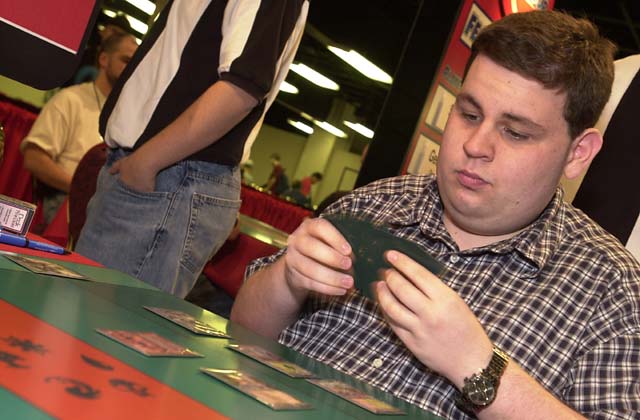 The final game was by far the most dramatic, with both players taking and losing control of the game several times. OMS drew first blood with the Elves and Kavu that are the cornerstones of the green/red archetype. Budde cast an Attendant, Urborg Emissary, Shoreline Raider, and so many Mournings that one of the spectators whispered "that's one sad bunch of creatures." With OMS's team depressed and ineffective, Budde was able to take his time to set up two brutal plays. He first used Distorting Wake to bounce most of Steve O's creatures and alpha strike to reduce OMS to 6. On the very next turn, he forced Steve O to 3 by Spinal Embracing and attacking with OMS's own Ancient Kavu. As if to acknowledge the sheer brokenness of his plays, Budde mused, "gotta love those rares." However, many of Budde's creatures died in these attacks, and OMS recast his defenses. With OMS at 3 and Budde at 13, the board revolved around an OMS Kavu Chameleon and Crypt Angel, and a Budde Duskwalker. Steve started to attack with the Angel, depending on the Kavu Chameleon's special ability to stop the Duskwalker. On the turn before he would have died to an Explosive Growthed Crypt Angel, Budde topdecked a Recoil for the win.