Hiroyuki, an amateur player from Osaka, was asked to desleeve by a judge before the match. His deck was a solid looking blue-red deck with multiple copies of Annul, Electrostatic Bolt, and Grab the Reins. He had more than his fair share of bombs as well with both Loxodon Warhammer and Goblin Charbelcher calling his deck home.

The freshly dubbed Mikey K and Editor-in-Chief of the Japanese Sideboard was running a white-red deck with an abundance of equipment and fast creatures including a pair of Leonin Den-Guard and a Skyhunter Cub. 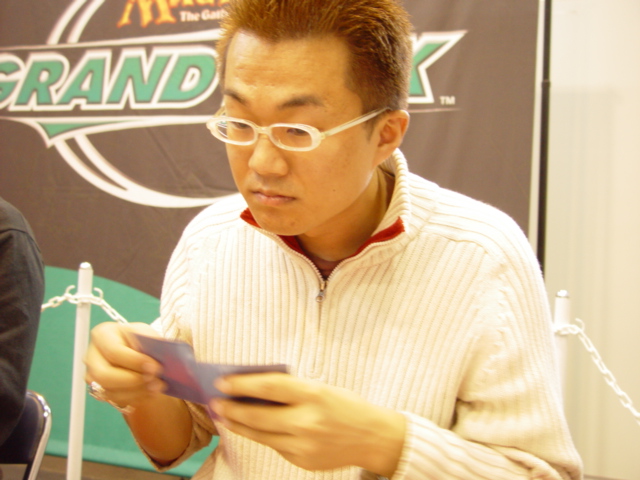 Hiro played a Wizard Replica with a blue mana up should it become necessary and passed the turn to Maki who skipped his mainphase. When he attacked, Hiro funneled the blue into his Sphere to Electrostatic Bolt the Cathodion and force Maki to burn for three in the process. Maki got in for one with his Wizard Replica but it was unclear why the Fatespinner stayed back with nothing to block it.

Maki skipped his attack step with a laugh and played a Duskworker. The Wizard Replica flew over and Hiro made a Malachite Golem. There was no attacking for Maki and he made a Soldier Replica. Maki played a Leaden Myr and immediately reaped mana acceleration from it when he could Thoughtcast for a single blue. He drew into Loxodon Warhammer--Maki had no good way to cope with the card in his deck. Hiro held off on it for a turn waiting until he could play it and equip on the same turn.

Maki attempted Arrest on the Wizard Replica and it resolved with a laugh from both players. Maki was not laughing when the Warhammer hit the Yotian Soldier--he looked stunned--and headed straight for the red zone. Maki traded his Soldier Replica but it was just a delaying tactic. There was nothing in Maki's deck that dealt with artifacts. He did have another Soldier Replica and played it.

The Leaden Myr got his big break when he rumbled into combat with the Warhammer. He traded with a Duskworker and died with a smile on his face. Hiro played a Cobalt Golem and sat back on Grab the Reins should anything go awry. Maki tried to stay alive by Arresting the Cobalt Golem. Hiro drew an and bounced the Soldier. When Hiro attacked with his freshly Hammered-up Malachite Golem, Maki Shrapnel Blasted it with his Banshee's Blade.

Maki was fighting for his life and played a Den-Guard. His opponent Shattered the Soldier Replica and Maki shot the Fatespinner to keep it back again. Maki played an Ogre Leadfoot and Hiro sent the next turn back without incident--he was holding another Grab the Reins. He used it to fling Maki's Leadfoot back at him when the Den-Guard shot the Fatespinner--he was going to move the Longbow over and kill the Fatespinner. When Hiro attacked Maki had a Bolt for the Spinner.

Hiro made a Wanderguard Sentry a turn later and it traded with the Bonesplittered Den-Guard. After a few turns of neither player drawing anything, Hiro finally played a Lumengrid Sentinel and Maki conceded with no creature on his next turn.

Hiro sided out his Malachite Golem and brought in a Regress. Maki kept his hand but Hiro shipped his back so quickly it was impossible to see what he was holding--most likely a no-land hand. He kept hand number two.

Neither player did anything at all until a turn three Cathodion was met by the inevitable Fatespinner from Hiro. Maki gave up combat--he couldn't even play land if he skipped his main phase--and played a Pyrite Spellbomb. Hiro was stuck on three lands and when he sent the turn back to Maki he attempted to kill it with the artifact but Hiro used a Regress to save it.

Taj-Nar Swordsmith found a Bonesplitter. Hiro found land and played his Fatespinner and an . Maki gave up his draw step and put the Bonesplitter on his Taj-Nar Swordsmith and attacked for seven. He also played a Soldier Replica. Wizard Replica from Hiro with mana up for it and the Spellbomb did not frighten Maki who skipped another draw and sent eveyone into the red zone. Cathodion was bounced and the Wizard blocked the Soldier. Maki replayed his 3/3.

Hiro was holding a Grab the Reins, Loxodon Warhammer, and Thoughcast but only had six mana and as many life points. he played the Warhammer and equipped his Wizard. Maki skipped his draw step agian and showed the one card he had been holding--Arrest for the Wizard. Hiro scooped.

Hiro kept his hand while Maki debated, he kept as well. 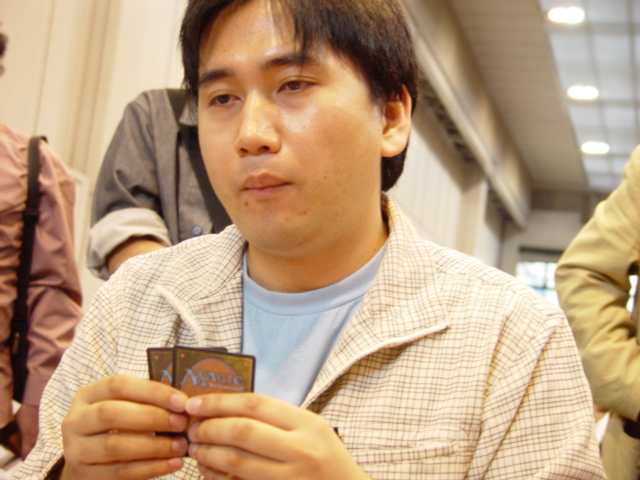 Maki had to skip his attack step and played a Goblin Warwagon. Hiro played a second Sentinel and on the next turn he was able to tap two of Maki's non-attackers when he played a Yotian Soldier. Maki found another Bonesplitter with his Taj-Nar Swordsmith and skipped his next draw step to send in his Bonesplittered troops and play another Cathodion. If he sat back skipping his attack steps, Hiro would be able to tap two blockers with his Sentinels every time he played an artifact.

On the next attack an equipped Cathodion was bounced with Regress after Maki skipped another drawstep. Wandergaurd Sentry allowed Hiro to look at the cards Maki was sitting on. He saw the bounced Cathodion and Arrest. The Sentry was Arrested next turn and Maki sent in the troops.

Hiro had been pecking away with his fliers but had to keep one back with a Yotian. When Maki attacked, Hiro flung his Arrested Sentry at a Cathodion. Hiro paid four for a Thoughtcast and drew a sixth land and another Grab the Reins. He tapped the Clockwork Condor that Maki had just played and attacked for one.

Maki untapped the Warwagon that he forgotten to pay for last turn, and tried to figure out where to put his Bonesplitter. It went on the Warwagon and he sent everyone in fearing a Bolt. Maki cycled his Chromatic Sphere but found nothing and scooped.