With the tournament sneaking closer and closer to the cut to the top 8, every match becomes more and more vital. Collins and his U/B deck just lost to Seck and were out for revenge against Nadebaum and his Fires deck, with the loser almost unable to make the top 8. 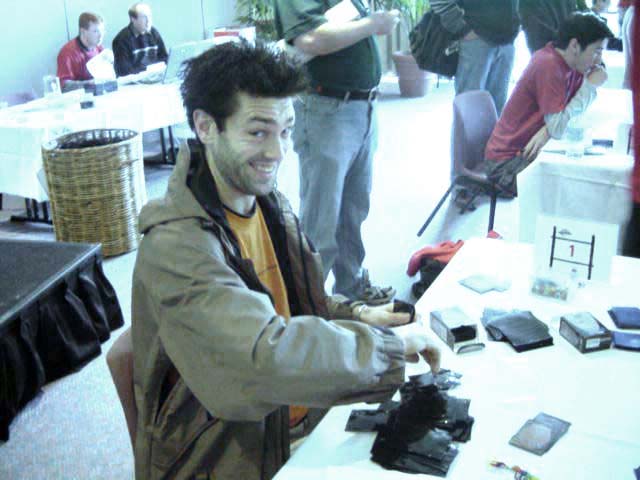 In typical fires fashion Nadebaum opened game one with Forest, Bird of Paradise. Collins played nothing but lands and counters for the first 4 turns in Nether-Go fashion while Nadebaum kept his quick start going with a River Boa that snuck through the Counters. After the River Boa Nadebaum's Blastoderm, Fires and two Saproling Bursts were all countered by Power Sink, CounterSpell, PowerSink and Foil.

The Flametongue didn't get a chance to attack, though as it got Recoiled in response to Collins's Salt Marsh getting locked down by Nadebaum's freshly-played Rishadan Port. A turn later, it was the Port that got locked down when Collins drew and cast a Tsabo's Web. Sensing that Collins is finally out of counters Nadebaum tries another River Boa but it got Foiled pitching a Nether Spirit in what could be one of the most broken plays in the format.

Collins now had only one card in hand, but it was a Fact of Fiction and after it resolved, he had a Spite/Malice plus a Foil in his hand, which he took over a Tsabo's Decree, another Fact or Fiction and an Underground River. With two new counters in hand and a Spirit in play Nadebaum was in real trouble, and when Collins cast another Fact or Fiction, Nadebaum was forced to chump block with Elves but it only delayed the win for Collins.

During the middle of sideboarding Collins complained, "See this is the problem with playing a deck you didn't build you never really know exactly what to take out". The deck was designed by Sam Ward and Milan Franger-refinement was handled by Ward and Dane Coltman, but Collins added in a few changes of his own to the sideboard to try and make the Skies matchup winnable.

Both players played nothing but land on the first four turns but then during Collins end step, Nadebaum attempts to cast Boil, which gets Sunk. He then untaps and attempts top cast Saproling Burst with Collins discarding a Nether Spirit to pay the real cost of the card. Collins then casts a Tsabo's Web to deal with the Rishadan Port that's been plaguing him since turn 2, but Nadebaum has another great answer Kavu Chameleon. Unfortunately for him to get past the Nether Spirit he must dump more threats and the only one he has got is another Chameleon, leaving him wide open to the decree which Collins casts, revealing Nadebaum's hand of Saproling Burst, Blastoderm and Shivan Wurm.

It was really the beginning of the end for Nadebaum as a Fact or Fiction turns up 3 more conterspells for Collins that can easily account for the cards in his hand. After 4 Counterspells and a couple of attacks from the Nether Spirit, Collins still had an amazing hand and Nadebaum had to pray to draw the Obliterate but alas did not.