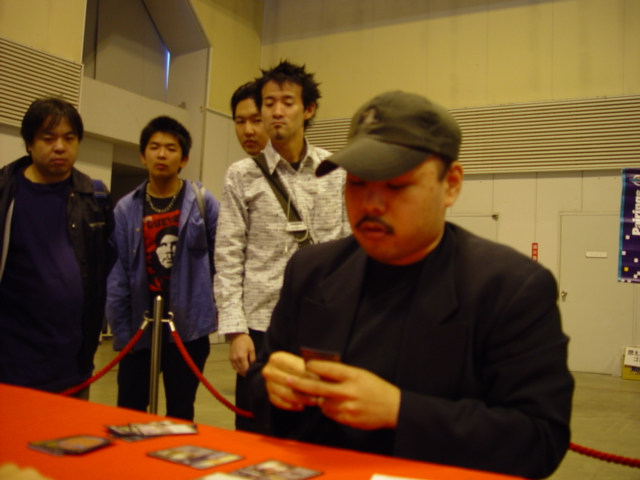 His jet-black moustache coordinated with a black suitjacket that melted into a black shirt over black pants. His traditional black-mana t-shirt was nowhere to be found, but that hardly mattered. Higashino was here and ready to crush some dreams. Those of amateur Ken Kiyota would do nicely. Kiyota was nervous, and who could blame him? He had a solid deck, though, with plenty of fat and ways to get to it. It was no surprise to see Higashino working with swamps, this time peppered with plains for some flying power and Harsh Mercy.

The first game was over in a flash. Higashino started with Festering Goblin, then Glory Seeker and Nantuko Husk. Kiyota had trouble finding defenders, and those that did show up were removed almost immediately. Just as he found some large defenders to stop Higashino's attack, Higashino pulled up Shepherd of Rot with two zombies already on board. Two turns later it was over.

Game two was more of the same. Higashino had the brutal opening of Festering Goblin and Shepherd of Rot. Kiyota was stuck at three lands without any plays, and it was little consolation that Higashino had stalled on just three swamps. The first chance he had to activate the Shepherd he swung with it instead. He wised up on subsequent turns. Finally, Kiyota hit his fourth land and got excited. 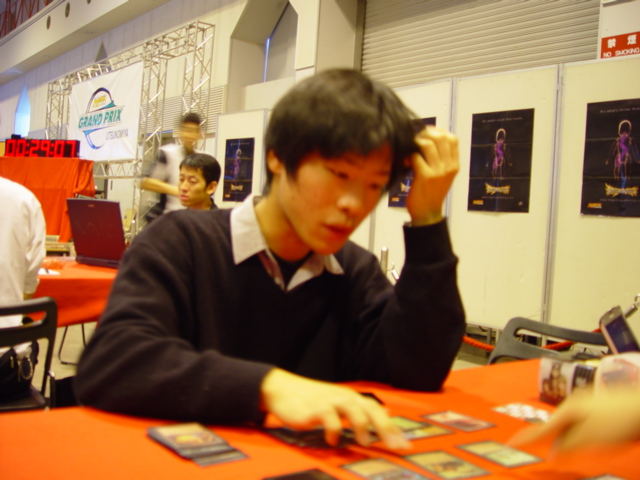 It was Wooded Foothills, and he searched out a forest before throwing down Embermage Goblin and finding a twin in his deck. Higashino stopped it with Feeding Frenzy. The second Goblin came down and Kiyota dug through his deck for a third copy! Higashino was ready with Swat, and time was fast running out for Kiyota. Higashino kept the pressure coming with Gustcloak Skirmisher.

Kiyota was finally hitting his stride. He busted out Silklash Spider and offed the Festering Goblin with Shock. The Embermage came down the following turn to take out the Shepherd. Higashino got a hit in with the Gustcloak thanks to Pacifism, but Naturalize stopped that line quickly. He tried Harsh Mercy, but realized that since he had to choose first, things were not going to go his way. He kept his Bird, and so Kiyota hung on to his Spider.

Then Kiyota came down with Kamahl, Fist of Krosa. Higashino's rejoinder was an inappropriately-named Ironfist Crusher. Kamahl hit for four. Higashino put Sandskin on his Crusher and hoped. Kiyota was all action now, bringing out Symbiotic Beast. Higashino cycled Dirge of Dread into a morph creature, but Kiyota didn't forget to attack with all his creatures and Overrun them, so it was all for nothing.

Kiyota had all the acceleration he needed this game. Elvish Pionneer let him have Wirewood Elf on turn two and still play a Forgotten Cave. Higashino was getting busy with Glory Seeker, and then a face-down creature. Kiyota took no chances with his life total, chumping with the Pionneer while he got ready with his Embermage Goblin line. Higashino couldn't answer the first two, and things were looking dire.

Kiyota continued to hammer, and though Higashino had Harsh Mercy to take out a morphed Skittish Valesk and Wirewood Elf, the Embermages survived and kept him from playing creatures. Kiyota played another face-down creature and saw no opposition from Higashino, whose whole game was suspended by the pingers.

At seven life he struck with Cruel Revival and Swat, but it was too little, too late. Kiyota's final Embermage was joined by Symbiotic Beast. That was more than enough to finish the job.