Masayuki Higashino, 1999 Japanese National Champion and winner of Grand Prix Sendai, faced off against Kazuyuki Momose, who came in top 8 at the 1999 APEC Championships, in a rematch of the finals of that very same Grand Prix. Will this match give Momose the chance for revenge? 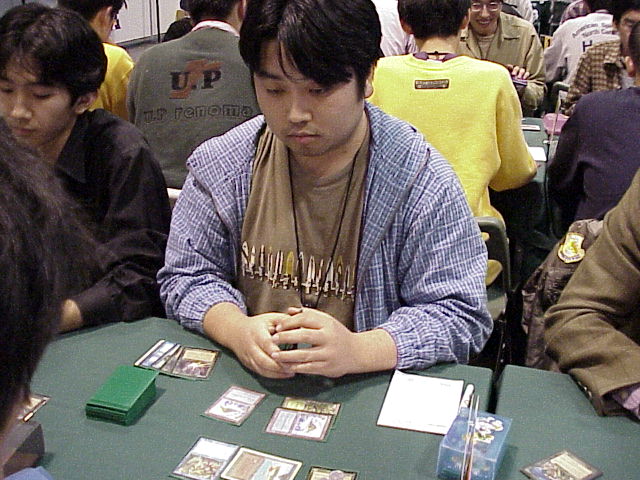 Higashino opened with a Carnophage followed by a Black Knight followed by Necropotence. Drawing nine extra cards on turns three and four helps any game plan and Higashino is able to overwhelm Momose before a Cursed Scroll can take its toll among his dark army as Momose couldn't empty his hand fast enough to hit a Knight of Stromgald.

In a spectacular turn five, Higashino attacked for four, discarded five cards to Firestorm all of his own creatures, himself and his opponent, and then sacrificed all his permanents in play to Kaervek's Spite Momose for the final five damage having done 14 points in one turn!

Higashino took his time sideboarding but neither his opponent nor the judge seemed to mind. A spectator happened to notice a Black Knight on the floor at Higashino's feet that Higashino is very relieved to put back into his deck before he gets a game loss. 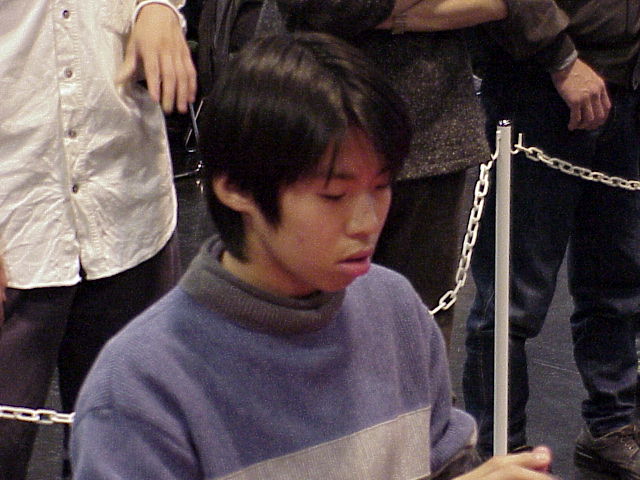 After game one, it looked like Momose was in trouble this match, but his opening of a Mother of Runes followed by a Soltari Monk gave him some early pressure. A Cursed Scroll off the top after being Duressed gave him board dominance, as Higashino was unable to get any significant threats on to the board. Cursed Scroll is *the* card in weenie vs. weenie matchups we've seen before in the feature matches. Higashino eventually drew an Engineered Plague that could clear the board but he is at too low a life to survive many turns of the Scroll so he conceded.

More time was spent sideboarding as Higashino tried to work out the best way to deal with Cursed Scroll. He drew three Duress game two and was wasting them removing Honorable Passages (put in against Firestorm) but he wanted to make sure he can remove any Cursed Scrolls from Momose's hand before they hit play.

Higashino's opening hand contained only one land - a Badland, but it also had two Demonic Consultations so he kept it. His opening turn he Consulted for a Swamp but ended up going much deeper into his deck than he expected. Momose Wastelanded the Badland forcing Higashino to Consult a second time for Swamp. Again he went much deeper than expected and Higashino ended his third turn with only 17 cards left in his deck, and he knew most of them were Swamps. 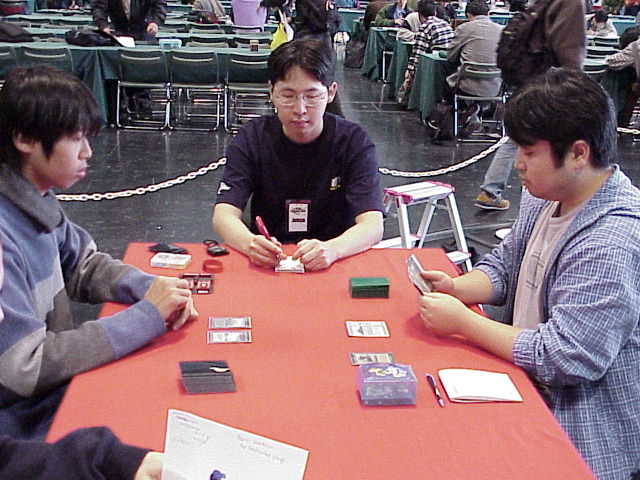 Momose, on the other hand, was busy developing his game as he dropped a first turn Cursed Scroll followed by a Soul Warden and then a Soltari Priest. Higashino used an Engineered Plague to keep the board clear of white creatures, but was stuck at three land including a Wasteland so he couldn't cast his Necropotence or Unmasks. Momose's Scroll was keeping the board clear of black creatures leading to many turns of no spells being played. Higashino's hand continued to fill with black spells that he couldn't cast and he got increasingly frustrated (though always with a rueful smile) that he couldn't draw another source of black mana with so few cards in his deck. Meanwhile Momose was dropping Clerics who died instantly to the Plague just to keep his hand low in cards so the Cursed Scroll would stay effective.

With nine cards left in his deck, most of which were Swamps, Higashino conceded as he knew there's nothing he could draw to get around the Scroll.