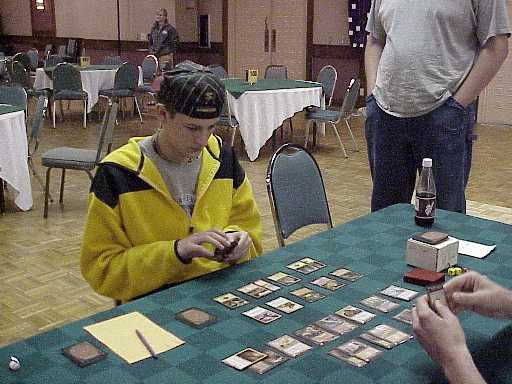 Matt Vienneau and Matt Linde both entered round 9 undefeated. The only other undefeated player, the unknown Steven Livingston from Austin, lost while this match was still going, and so the winner would be the only remaining undefeated player. Matt Linde won the die roll, and chose to play first. Both players are thorough shufflers, with Vienneau being the most thorough shuffler I have ever seen - pile shuffling three times in between drafts, and riffle shuffling at least 15 times. Linde had a similar amount of pre-match shuffling, and when the two exchanged decks for cutting, both players thoroughly shuffled each others decks for another good two minutes. As Vienneau shuffled Linde's deck, he commented on the lack of sleeves on the deck, and Linde shrugged. Vienneau went through the deck and pulled out a card, showing it only to Linde, and said "land." He was right. Linde was offended, but said nothing. Vienneau asked if he could place his hand over Linde's deck when Linde was deciding whether or not to mulligan, and to this Linde said "I guess I'm just a savage cheater." That was the end of the discussion. Once the pre-match shuffling and accusations ended, both players drew their hands. Linde's hand was poor, containing only one land, and he threw it back and drew 6 new ones (after a good three more minutes of shuffling from both players). This hand was better, Vienneau was fine, and so the first game finally began, a good five minutes after the round had begun. 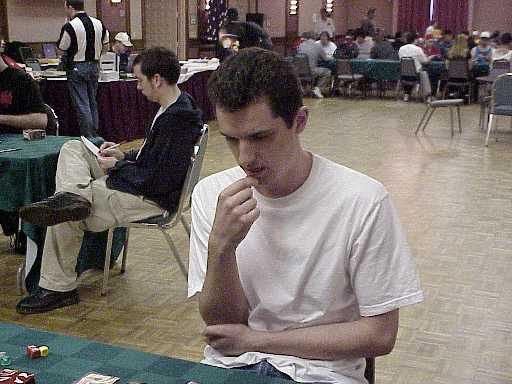 Vienneau stalled on land early, but laid lots of little creatures, and on turn 4 had a Thornscape Apprentice, a Sunscape Apprentice, a Quirion Elf, and a Quirion Sentinel. Linde's creatures were more busty - a Pincer Spider, Llanowar Knight, and Kavu Climber. Linde wasn't getting much damage through though, because the Thornscape Apprentice was keeping the Pincer Spider tapped down, and by the time the Climber hit the board, Vienneau had caught up on land, and played a Charging Troll. This really locked up the ground in Vienneau's favor, even though the Thornscape Apprentice had been Shackled. Vienneau played a Benalish Heralds, and with his Quirion Elves able to produce blue mana, the game was going to quickly turn very much in his favor. Linde and Vienneau both played Rampant Elephants, but Vienneau's was in a much better position to do some serious damage. At this point, after the mulligan, Linde had drawn nothing but land after land. He was holding three lands at the end of the game, when Vinneau's Rampant Elephant did him in. Vinneau could have won the turn previous, but held back, worried about potential life gain or combat tricks like Holy Day or Tangle. Had he paid attention in the draft, he would have known that Linde hadn't drafted any. Game 1 to Vienneau. 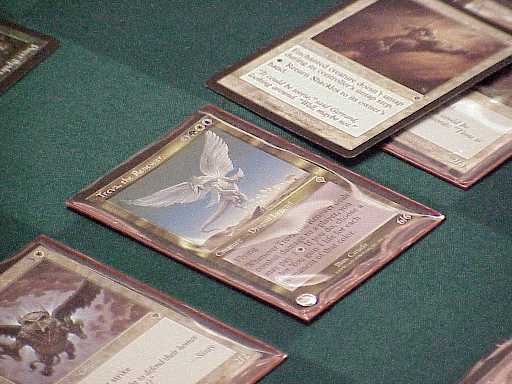 Linde mulliganed again to begin game 2. His next hand contained 3 land and 3 spells, so he kept. Vienneau's hand only contained 2 land, but it had a Quirion Elf, so he kept it. He drew into another land, and cast a third turn Benalish Heralds. Both players played Razorfoot Griffins, and things stalled out a bit. Vienneau added a Sunscape Apprentice and then laid his bomb - Treva, the Renewer. Linde didn't draw an answer, and after Vienneau used his Sunscape Apprentice to move Treva out of the way of an incoming Shackles, the end was a foregone conclusion. Vinneau again made a minor play error, by not killing Linde on the previous turn using the newly drawn Explosive Growth in his hand. He admitted after the match that this was just a mistake on his part. I guess it's hard to complain about bad plays, when you're 9-0. Vienneau wins game 2, and the match 2-0.