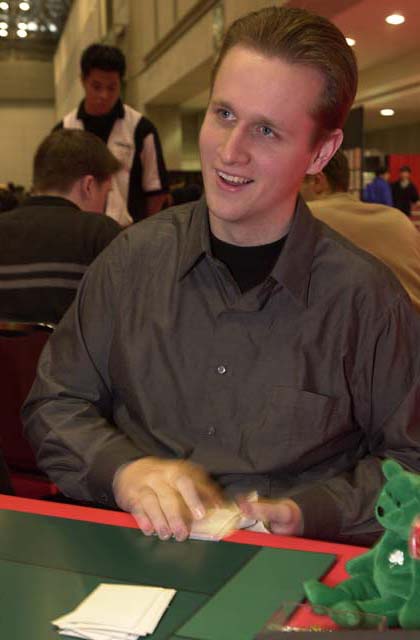 Bob Maher and Matt Vienneau set a very friendly tone for their round 8 Feature Match by attempting to dictate my article, feigning insults just for my benefit. They joked about how much better Vienneau does in the Tour itself as opposed to the many side drafts they've played over the years. They each go way back to the early days of the Tour, but each has seen his career rise over the last year and change. Vienneau won a Grand Prix and finished 3rd in another. Maher, meanwhile, it the reigning Player of the Year thanks to his win at Pro Tour Chicago plus his runner-up performance at Worlds. I asked them their record before they began and found out "we're Skizziks - 5-3." Both players are running black/red discard decks that each splash green for Darigaaz and enchantment removal.

Matt did unspeakable things to Bob during the early turns of game 1. On consecutive turns, he played Bog Down, Blazing Specter, and then Thunderscape Battlemage with the black kicker. Maher could muster up only a lone Ghitu Fire (pointed at the Specter) in his own defense while the rest of his hand (Crypt Angel, Ghitu Fire, two land, and a Battlemage of his own) all went to the graveyard. Maher did then top-deck a Nightscape Familiar and a Terminate which made it hard for Vienneau to actually kill him, but Vienneau got a Pyre Zombie running and that looked like it would be enough.

The tone changed a little when Maher drew and played Bog Down with kicker. That knocked two lands and a Ghitu Fire out of Matt's hand. Maher asked Vienneau why he hadn't just burned him last turn with the Fire (Vienneau had instead replayed a Pyre Zombie). Vienneau just said that it was an excellent question, especially since he could have played land and Fired for 8, ending the game immediately. "But I preferred to play around Bog Down," said Vienneau, tapping his head and mocking himself. Maher just shook his head "I can't believe I'm going to lose this game." Vienneau did eventually win anyway, but Maher wouldn't stop talking about Vienneau's mistake while they were sideboarding. "You discarded the win!" Vienneau explained "no, the win was on the table, I discarded the other win." Maher's final word was pretty straight-forward: "You're not winning this match." 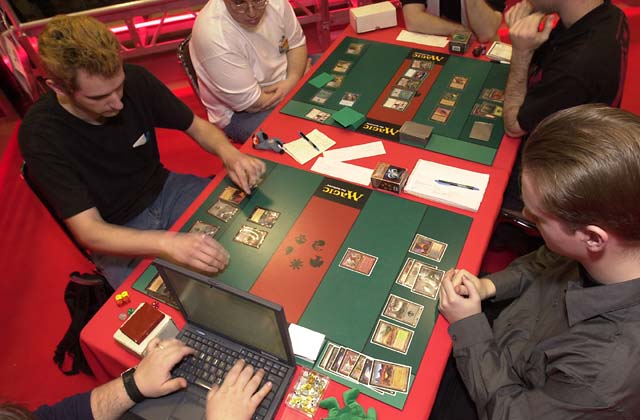 Vienneau went back to his sideboard before game 3. Maher asked him about it and Vienneau explained that he liked the way Maher had sideboarded for their mirror match better. Maher laughed mostly because he believed him. "What do you do, Matt, wait and see how the people who actually playtested sideboard?" Vienneau answered "Oh I playtested, but I was testing with Gary Wise, so I didn't learn a whole lot." 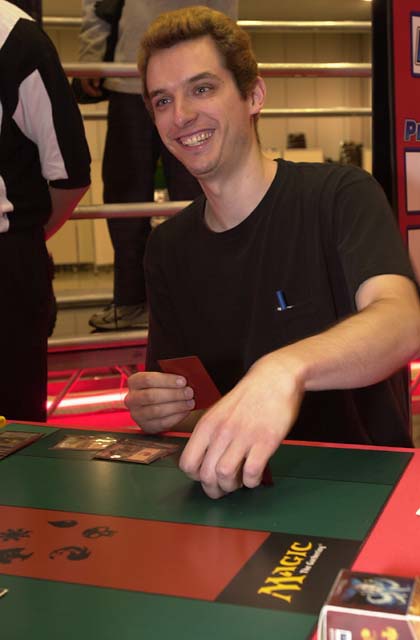 "These are good," laughed Vienneau when he played turn 3 Bog Down - the very card he sideboarded back in after Maher hurt him with in game 2. Maher answered back with his own Bog Down on his own turn 3. Vienneau next sent over a Specter, which Maher Terminated after being forced to discard a Battlemage. Maher next knocked away Vienneau's last two cards - a pair of Crypt Angels - with a second Bog Down, but when Vienneau top-decked a Blazing Specter Maher was both behind and visibly upset. Another topdecked Blazing Specter by Vienneau and Maher was down and out.

The players spent 10 minutes comparing the differences in their red/black builds and their approaches to sideboarding for the mirror match. Vienneau laughed a lot, saying "I really enjoyed playing against you - I learned so much about my deck!" It's not clear how long Vienneau can maintain his reputation as a bumbling idiot if he keeps winning, but he does his best to always look like he's getting lucky when he wins.