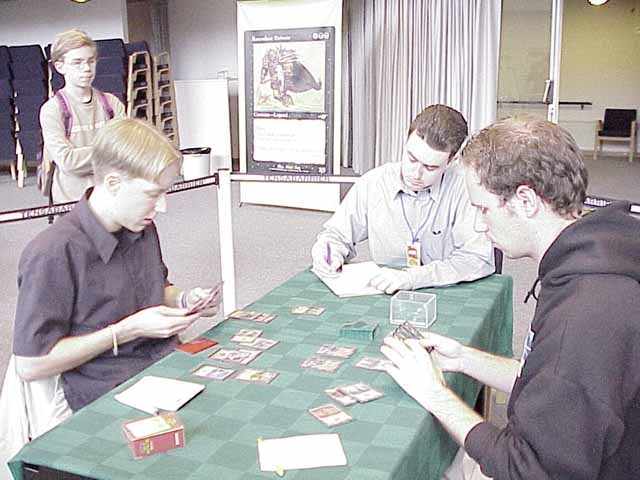 Both players were sitting pretty at the top of the standings coming into this round. With somewhere around 10-2-1 needed to make the finals a win this round for either player would give them a great chance of getting the Swiss points necessary to advance.

Ryan Fuller has moved over to Europe from Canada just recently and is currently living in Amsterdam with his friend and drafting partner Noah Boeken. Noah was in the same pod as Ryan and Mattias for this draft and at one point drafted a Rout that Mattias felt should've gone into his deck. As a result of Noah switching colours Mattias' deck was comparatively weak and Ryan immediately started trash-talking Mattias' deck when he reached the table.

Ryan kicked off game one with a fast start as he played out Quirion Sentinel and Thunderscape Apprentice on his second turn. A second Apprentice on his next turn made blocking duties very difficult for Mattias in the early game, and he was forced to take some early damage and trade off superior creatures for Fuller's weaker ones.

Mattias eventually stabilised with a kickered up Benalish Knight that Ryan is unable to remove. Ryan had got Mattias down to thirteen life at this point however, and was able to use his Apprentice to start stealing Mattias' life every turn. The ground stalls somewhat as both players have large ground creatures and are unable to break through. The game didn't stall for long however. Ryan was able to use Agonising Demise to deal four points to Mattias by taking out his Serpentine Kavu. He then followed with a Canopy Surge and Tribal Flames in his next turn to deal the final seven damage needed to take game one.

Game two was a Polar Opposite to the first tight game. Ryan mulliganed down to six initially and then kept a one-land hand. Unfortunately he never drew another and discarded numerous times before scooping to Mattias' every increasing army of creatures.

Ryan is visibly annoyed at the draw he had that game. He knew his deck was better than Mattias' and doesn't mind saying so, telling Mattias "If I draw lands and spells I win - why should I bother sideboarding?" prior to the third game.

Game three again saw a mulligan for Ryan. He still got a decent start with a Thunderscape Apprentice and a Viashino Grappler but Mattias traded the Grappler off for a Pincer Spider at the first opportunity. Mattias took control quickly with a Reckless Spite on two of Fuller's better creatures, and already a card down from the mulligan, Ryan quickly ran out of steam. Mattias now started to exert control as he found himself drawing two cards every turn thanks to an active Benalish Heralds.

Time was running out at this point and Ryan's play slowed down noticeably as he looks for a way out of the ever-deepening hole being dug for him by Mattias' Heralds. Drawing two cards a turn Mattias was able to play out threat after threat put Ryan under significant pressure. Time was called in the round just as Mattias draws the card he was looking for. After many creature trade-offs Mattias' Death or Glory allowed him to return four creatures to play from his graveyard to which Ryan had absolutely no answer. Ryan scoops before Mattias even finishes resolving the spell as he realized he had no way out.