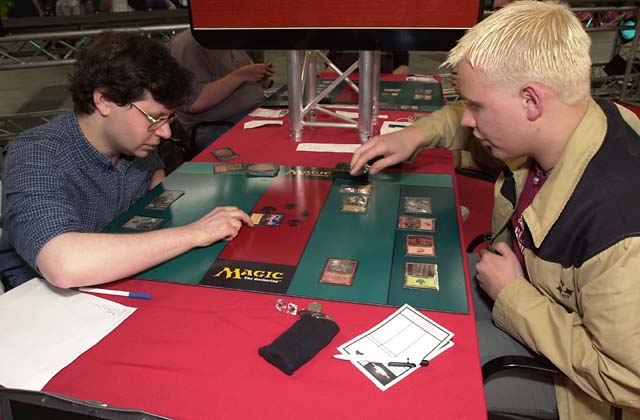 Straight from the first draft table to your screen the man who use Rats to crush a Dragon versus one of Germany's top players. They were both with eighteen points (6-2) heading into this round and the winner would have a much easier road to the fabled Intentional Draw zone.

Kühn chose to play first, dropping a first turn Thunderscape Apprentice. Mikey then played his trademark Ravenous Rats, netting a discarded Forest and forcing Kühn to keep the Apprentice away from the Red Zone. On the following turn, the Rats got Zapped and the Apprentice nibbled Pustilnik.

The next creature from the American, was much bigger: a 4/3 Mire Kavu. Not wanting to be outdone, Janosch played a Serpentine Kavu. That Kavu was taken down by a Flametongue Kavu and the Apprentice killed by a Assault/Battery. With no play from the German Mikey went for the throat swinging for eight and playing a Thunderscape Battlemage with black kicker (getting an Explosive Growth and a Phyrexian Slayer).

The next draw phase from the blond European didn't give him any answer and he conceded the very fast, seven minutes including shuffling, and one sided game. Pustilnik's deck dominated from the start and while shuffling for the second game Kühn silence mirrored his worried frown. 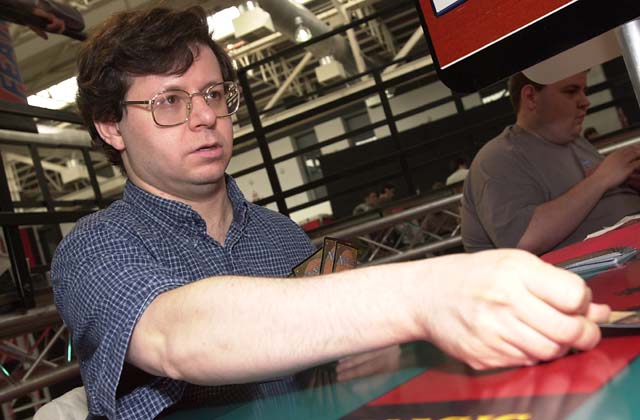 Kühn played a second turn Quirion Elves naming Black followed by a Kavu Runner that went straight into the Red Zone. Pustilnik was in further trouble when he couldn't draw his third land and was forced to discard a Kavu Recluse. Janosch played an Amphibious Kavu to capitalize on that fact. Mikey then got his third land, also is third Swamp, and played a Do or Die splitting the creatures into the following piles:

Kühn kept the two Green creatures and added a hasted Serpentine Kavu to his side of the table. Despite the onslaught Pustilnik still had some tricks and used a sideboarded Slay to take out the Serpentine. The German kept the pressure in the "High" range with a Hunting Kavu. Having finally found two Mountains Pustilnik tried to come up with a game plan for his desperate situation.

He played a Thunderscape Battlemage to force Kühn to discard his last card and got Zapped in response. That put him in range on the next attack even with the Battlemage blocking. It was too little, way too late and he was forced to concede.

Still with forty-five minutes in the clock, they shuffled in silence with no additional sideboard.

A second turn Rats nabbed a Mountain and attacked twice before getting Zapped out of the table. Janosch then played his first creature, an Amphibious Kavu but Pustilnik had a bigger Kavu: a 4/3 Mire Kavu. The American liked the 4/3 so much that he played another one, this time an Urborg Shambler. Janosch found a blocker for both of them in a kicked, first striking, Pouncing Kavu. With the first striker holding him back, Mikey had to redo his game plan. 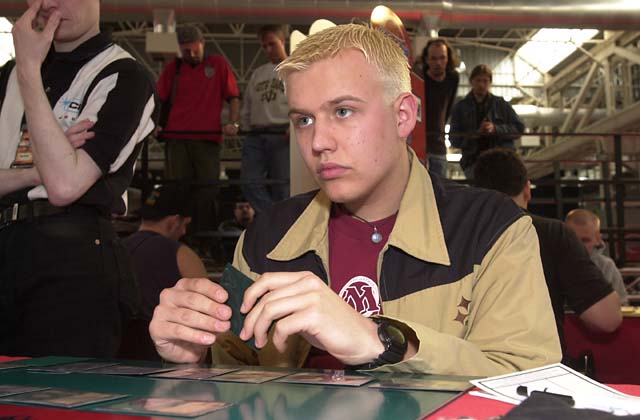 That looked easy when he tried to kill the Pouncing with a Flametongue Kavu, but Janosch showed his stuff. He was ready with an Explosive Growth to save his vital blocker. After much hesitation the German played a tick-tacking Smoldering Tar tightening the lock that kept Mikey's huge monsters back. The American could only answer by adding a Rogue Kavu to his side that Kühn quickly matched with an Hunting Kavu.

Mikey: "Someone is going to die. For whom does the bell toll?" (while Janosch thumbed his Tar).

Pustilnik played a kicked Thunderscape Battlemage getting a Volcano Imp and a Explosive Growth (Kühn's last two cards). Somehow this spelled the end for the German because Mikey was about to go on a rampage.

A Do or Die ignited the trouble and Janosch chose to keep the Hunting and Amphibious Kavu, over a kicked Pouncing Kavu, after a long thinking period. The pain kept coming when Mikey Slew the Hunting Drake and Assault/Battery the Amphibious Kavu to leave only a Smoldering Tar on the other side of the table.

A very, very stunned German, and audience, could only witness the onslaught of the huge horde and the obvious concession. What a shocking finish to an exhilarating and terminally fast match.