At 6-2, both Onoda and Asahara are within reach of a Top 8 seat. They lead their pod, with Onoda's RG deck and Asahara's GBW deck both going 2-0. Each of them has a number of game-breaking cards, which should make for an exciting match. 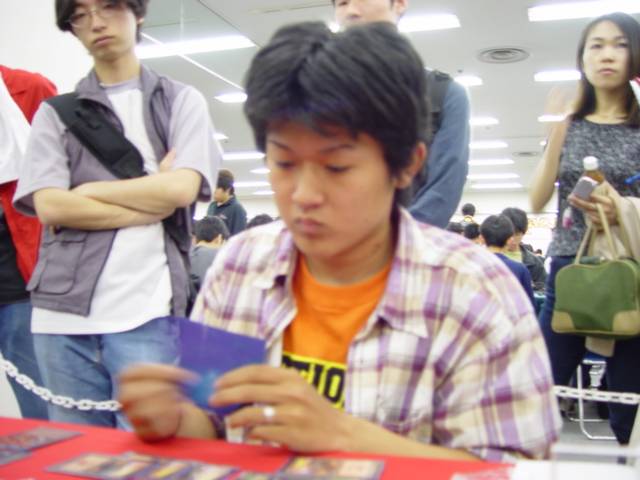 Going second, Onoda took a mulligan, while Asahara started out with a turn two Basking Rootwalla. His next draw was Mesmeric Fiend--not a bad start by any measure, but not one good enough to take advantage of Onoda's slow start. With a choice of 2 Forests, Nantuko Cultivator, Acorn Harvest, Arcane Teachings, or Temporary Insanity, Asahara chose to take Arcane Teachings with the Fiend. Drawing two lands in a row, Onoda was soon able to play the Cultivator as a 4/4, taking back tempo from Asahara. The standoff continued as Asahara played Anurid Barkripper and Giant Warthog, while Onoda made 4 squirrels off of Acorn Harvest. In almost any other situation, any one of Asahara's or Onoda's cards would have broken the game right open, but in this case they only served to balance out their opponents'. This back-and-forth continued--Asahara played Phantom Centaur only to have Onoda play Beast Attack. When he used Ironshell Beetle to pump up the Centaur, Onoda simply flashed back the Beast Attack. It was Onoda who finally broke the stalemate, using Acceptable Losses to kill the Mesmeric Fiend and get his Arcane Teachings back, albeit at the cost of a Temporary Insanity. Playing on the Cultivator, he began whittling away at the Centaur. Asahara used his two Lead Astrays to tap Onoda's larger blockers and get some damage through, but was unable to draw anything to open up the game. Once the last counter was removed from the Centaur, Onoda began attacking with his two Beast tokens. Hoping to take control of the game back from Onoda, Asahara played a second Phantom Centaur and powered it up with Seton's Desire. Unfortunately for him, Onoda had been sitting on an Ivy Elemental. Once it hit the table, Asahara's days were numbered. 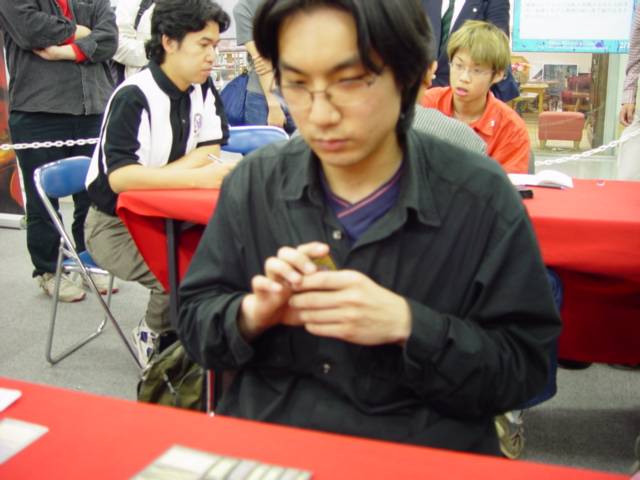 The second game saw a quick start from Onoda, who enchanted his first turn Druid Lyrist with Crackling Club and commenced beatdown. Asahara quickly put a stop to that with a third turn Anurid Barkripper and a fourth turn 3/3 Nantuko Cultivator. Onoda traded the Lyrist for the Cultivator, only to have Asahara rapidly increase his army with an Arrogant Wurm, Giant Warthog. The number of large green unhousebroken monsters grew as Onoda brought out a Krosan Archer, a 4/4 Ivy Elemental, and several squirrels off of Acorn Harvest. It looks like this game was also going to end up in a creature standoff, but Asahara broke the stalemate by putting Seton's Desire on the Warthog and began swinging. Onoda sacrificed three of his creatures to stop the 7/7 trampling monstrosity, but that still left Asahara ahead in the creature race. Using Lead Astray, Asahara began knocking down Onoda's life total. Hoping to seal his victory, he cast Mesmeric Fiend, revealing in Onoda's hand a Moment's Peace, Arcane Teachings, and a Beast Attack, which Onoda hadn't been able to cast for lack of a third Forest. Taking the Moment's Peace, Asahara maneuvered for the final blow. When Onoda attempted to play the Arcane Teachings on one of his creatures, Asahara responded with another Lead Astray, targetting that creature and another of Onoda's blockers. Left with no way to blunt Asahara's attack, Onoda scooped.

Onoda was forced to mulligan again the third game, while Asahara played a Basking Rootwalla. Stalling at two Forests, Onoda conceded after Asahara made a 4/4 Cultivator. In comparison with with other two games, the third lasted but a few minutes. Desleeving his deck, Onoda wistfully commented that "Nothing changes faster than luck."