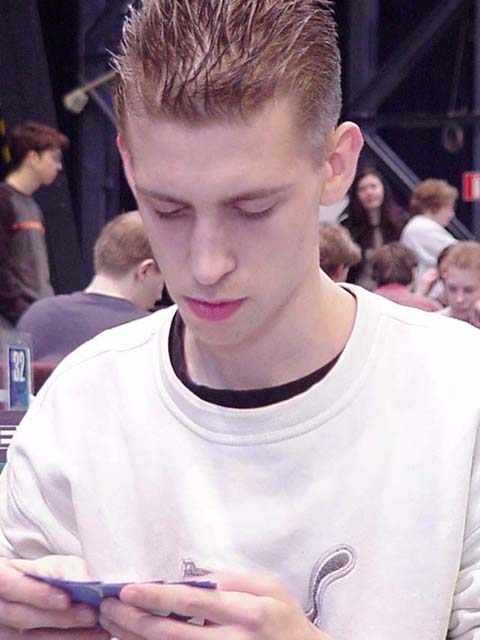 In the ninth round of 2001 Grand Prix Gothenburg, Mikael Magnusson from Sweden faced Franck Canu from France. Franck is a well-known player in the Pro Tour circuit, he has been around for quite a while and he has had a few good results, including two Grand Prix Top 8 finishes. Mikael Magnusson, also MickeH on IRC, is more unknown. His deck was pretty cool though. Micke was playing a Zombie deck that contained a Lava Zombie, a Phyrexian Reaper, a Phyrexian Scuta and a Pyre Zombie - in addition to the master himself, Lord of the Undead.

Magnusson got to play first. His opening hand had two lands only in addition to an assortment of spells and creatures. Canu's draw held two lands as well, in addition to a Rushing River, a Silver Drake, an Eladamri's Call, an Ardent Soldier and a Stormscape Familiar. So while Magnusson failed to play anything during his third turn, Franck had an Ardent Soldier in play that started attacking.

Mikael played a land during his fourth turn then, and dropped a Kavu Recluse. Franck got out a Prison Barricade. Then, a huge Phyrexian Scuta came into play on the Swede's side of the table, and Micke used his Kavu Recluse to turn Franck's plains into a forest. It didn't matter that much though as Franck still couldn't draw the blue mana source he needed.

During his sixth turn, Micke tried to pull a trick. He used his Recluse to turn one of his swamps into a forest, and then he cast Exotic Curse on Canu's Prison Barricade. The Frenchman saved it by using an Aggressive Urge to pump it, and used it to block the Scuta for a turn. Mikael then played a Thunderscape Apprentice.

The Swede wasn't very happy when Canu played his Obsidian Acolyte, effectively neutralizing the Phyrexian Scuta. He could still attack with his Kavu Recluse though, and he cast a Kavu Scout as well. But finally, Canu was able to find a blue mana source. He played a Quirion Elves calling blue, and after Micke had attacked and played yet another Kavu, he used Eladamri's Call to get a Shoreline Raider. Instead of playing it though, he used all his mana to cast a Benalish Emissary with kicker, hoping to somewhat slow down the Swede.

Magnusson knew his tricks though. He attacked with his Kavu Scout, and when Canu put both his Ardent Soldier and the Emissary in front of it, he used his Recluse to turn one of his lands into a forest to make the Scout 3/2, and then he used the forest to activate his Thunderscape Apprentice's green ability, pumping the Scout to a 4/3 creature. So the Scout survived, killing the Emissary in the process. Micke then played a Lava Zombie and returned one of his Kavus to his hand.

Finally, the Shoreline Raider came into play on Canu's side of the table, and that kind of stopped Magnusson's attack. With his Kavus sort of locked down, he looked to the Zombies again and slapped his Lord of the Undead on the table. "Sh*t!" Canu exclaimed, playing a Stormscape Familiar and then his Silver Drake to get some offence going.

A Rushing River slowed down Magnusson's offence. Magnusson answered by playing a Hypnotic Cloud with kicker, taking a Wayfaring Giant, a Stormscape Familiar and a Sawtooth Loon from Canu's hand. Still, Franck got his attack going, and the damage race was on when Magnusson finally drew his Zap for the annoying Obsidian Acolyte. The Swede had the most creatures and it looked like he might win, but Canu drew his Armadillo Cloak, slapped in on the Silver Drake and attacked for the win.

Magnusson went first in the second game. Franck got out a second turn Quirion Elves, but Micke had the Zap and killed it to prevent Franck from getting to that blue mana of his. Micke then went into Zombie mode. First, he played a Pyre Zombie, then he played a Phyrexian Reaper that he put in front of a Rooting Kavu. 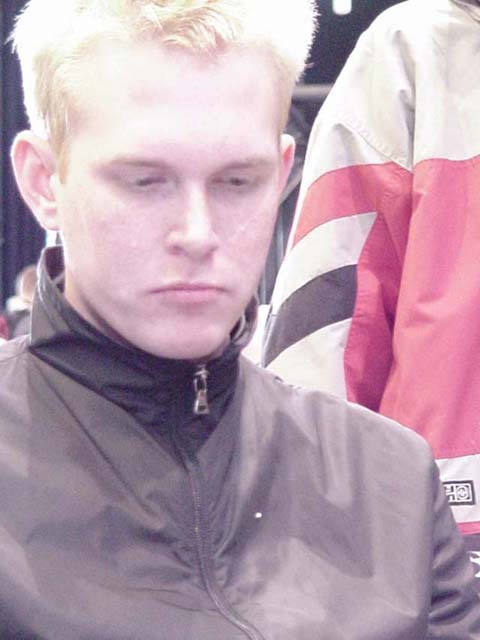 Franck solved his island problem by drawing a Treva's Ruins, and he started playing flyers - first a Razorfoot Griffin and then a Sawtooth Loon. That didn't prevent Magnusson from doing his zombie thingy though. The Swede Recovered his Phyrexian Reaper and then he cast a Lava Zombie, returning the Pyre Zombie to his hand. He then started attacking. Magnusson also had a Plague Spores for Canu's Treva's Ruins and the Sawtooth Loon.

This time the Frenchman managed to draw blue mana. He played an island, and then he got out a Stormscape Apprentice and re-cast the Griffin before a Hypnotic Cloud with kicker stripped an island, Armadillo Cloak and Rushing River from his hand. Magnusson was definitely on the offense, and he re-cast his reaper along with a Thunderscape Apprentice.

Franck was suddenly down to twelve life. He played a Sunscape Familiar to stop some of the damage, and then he re-filled his hand with an Allied Strategies. His tapper also allowed him to tap down Magnusson's Phyrexian Reaper when a Sinister Strength made it really big and black and bad. But Magnusson didn't mind. He just dropped two Volcanic Imps and let the Pyre Zombies and the Thunderscape Apprentice slowly reduce Franck's life total.

Canu drew another Armadillo Cloak and Cloaked his Griffin to get some life, but it was too late. Micke pinged him down to seven, then an attack brought the Frenchman down to one. And the Thunderscape Apprentice got the honor of finishing him off.

The two first games had been really long, so the two players had around ten minutes left when they started shuffling up for the last game. Franck chose to play, and he cast a turn two Sunscape Familiar. Micke had a slightly better creature though. He went on the offence right from the start, and dropped a turn two Rogue Kavu. The Sunscape Familiar was Terminated so that the Rogue Kavu could start working on Canu's life total.

Canu played a fourth turn Rooting Kavu, but he chose not to block the Rogue Kavu, going down to 14. Magnusson wanted a bigger creature though, so he played his Phyrexian Scuta with kicker. Unfortunately, Canu had a Rushing River that he used to return the Scuta and Kavu to Magnusson's hand, and he then attacked with his Rooting Kavu. 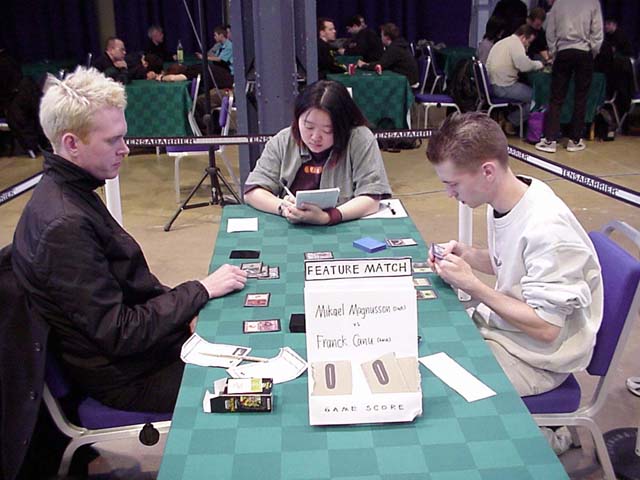 Some color-hosers never hurt though, and Magnusson happily Slayed the Rooting Kavu. He then re-cast his Rogue Kavu, and started attacking again while Canu used his Sawtooth Loon to look for something useful. Magnusson didn't have to look for the good stuff. He went into zombie mode and played Lord of the Undead and Pyre Zombie, and the audience were highly amused.

A Benalish Emissary with kicker took out one of Magnusson's mountains, but the Swede didn't mind. He attacked, and after Canu had blocked the Pyre Zombie, he Assaulted it before playing Phyrexian Scuta with kicker once again. "I didn't think this was constructed," someone in the audience commented, and a lot of people stopped by to look at the zombies in action.

At this point of the match, Canu had a Sawtooth Loon, a Treva's Ruins and a Sunscape Familiar in his hand, and it definitely looked like he had lost the match. He played his Familiar and then the Loon to look for creatures, but he didn't find anything. The following attack brought him down to six life and after counting for a short while, he scooped.