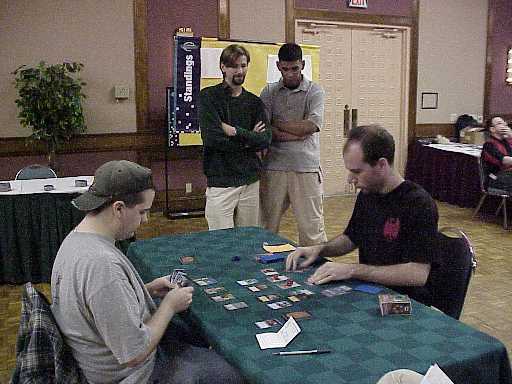 At any given time, there are a few locations in the world that are Magic powerhouses. No one knows precisely why or how this occurs, but for some span of time, an area will develop a vibrant Magic scene that includes a number of the top professional players. In the early days of Magic, southern California was one such Magic mecca as the home of the Pacific Coast Legends: Mario Robaina, Mark Chalice, Frank Gilson, Scott Burke, Henry Stern, and Mark Justice. Hundreds of players flocked to play at the Costa Mesa Women's Club and the members of this team and their friends were some of the premier Magic players in the game. This didn't last forever, however. At some point, Southern California was eclipsed by brighter stars, Sweden and Toronto, Canada. With Leon Lindback, Thomas Andersson, and Olle Rade, Sweden was a hotspot of Magic innovation, and Paul McCabe and Terry Borer brought the glory home to Toronto. One of the current epicenters of Magic talent is the city of Boston in the Northeast USA. In this match, two of Boston's greatest players square off. Mike Bregoli, who has made a series of top 8's at Pro Tours, with the most recent being Pro Tour - New York '00, is up against David Humpherys, whose credits include a top 8 at Pro Tour - New York '99 and a first place finish in 1999 Team Pro Tour with his team, Your Move Games. Both players are fond of control decks and their draft decks betray this fact. Both players claim to have had difficult drafts and ended up playing Black/Blue/White, with a good mix of library manipulation like Opt and Probe, countermagic like Exclude and Prohibit, and a selection of creatures and tricks. Mike Bregoli and David Humpherys lost the first round of the draft with their decks and they are hoping to turn things around in this match. 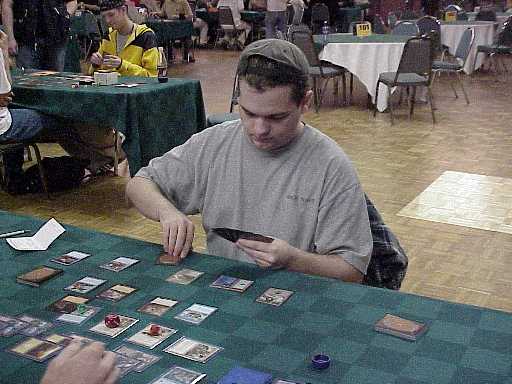 Game 1 David Humpherys won the die roll, and chose to go first, but failed to get off to a quick start. Bregoli tried to apply some pressure with a third turn Urborg Phantom, but he was slowed down by David's Repulse. Mike Bregoli then ran into some problems, failing to draw a fourth land for a number of turns, so he was forced to cast the Urborg Phantom again, followed by a Sparring Golem. Humpherys responded with a Prison Barricade with the kicker, effectively shutting down Bregoli's offense, and followed that up with a Faerie Squadron and an Ardent Milita. Mike eventually drew a fourth land and began casting additional creatures like Rainbow Crow but Humpheries trumped him once again with a Benalish Herald. Over the course of the game, David drew six more cards than Mike with the Benalish Herald and successfully cast two Probes with the kicker, gaining a huge amount of card advantage over Mike Bregoli. It was only a matter of time before Humpherys was able to overrun his opponent with the Faerie Squadron and his new friends, Alloy Golem and Blind Seer. Game 2 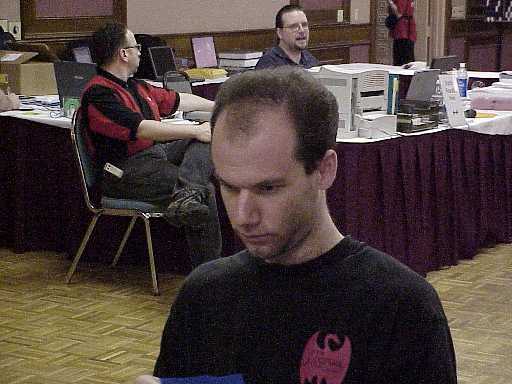 Mike Bregoli chose to play first in the second game and again started off quickly with a second turn Galina's Knight and a third turn Metathran Transport. Humpherys responded with an Obsidian Acolyte and an Ardent Militia with the kicker on turn four, although the Ardent Militia was returned to his hand by Mike Bregoli's Stand/Deliver. Mike Bregoli continued to chip away at David's life total 3 points at a time, eventually casting a third creature on the sixth turn, Slinking Serpent; not an ideal card against David Humpherys and his Obsidian Acolyte. After casting Probe with the kicker on the fifth turn, David cast a Prison Barricade and an Ardent Militia with the kicker on the sixth turn to try and stop Bregoli's beatdown. Bregoli then attacked with everything; the Prison Barricade blocked the Galina's Knight, the Obsidian Acolyte blocked the Slinking Serpent, and the Metathran Transport came through for another point of damage. Bregoli got the best of it, however, as he made his Slinking Serpent blue with his Metathran Transport, killing the Acolyte, and used a Defiling Tears on his Knight to take down the Prison Barricade. By this point, however, Mike Bregoli had run out of steam. He failed to increase the pressure on Humpherys over the next few times and Humpherys was able to shore up his defense with a Shackles on the Metathran Transport and mount an offense with a Faerie Squadron with kicker. Bregoli used Barrin's Unmaking to bounce the Faerie Squadron, hoping to Exclude it when Humpherys cast it again, but David Humpherys had a Prohibit ready for the Exclude and the Faerie Squadron continued its offense to win the game.