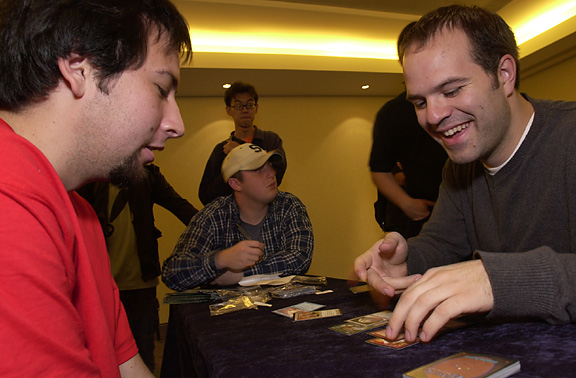 After sharing a table for deck construction, the two players started the round early, gathering a large crowd of spectators. In keeping with his reputation as a crowd pleaser, Mike Long put on a show for the crowd that kept even those who had little idea of what was happening amused. Having won the die roll, Long chose to play first.

Coming out of the blocks fast in the color draft, Long had a turn 2 Llanowar Knight followed up with a turn 3 Titania's Chosen. After Blackwell's turn 4 Nightshade Seer was Parched, Long untapped and dropped Scragnoth, giving another counter to the Chosen and bringing the damage dealt to Blackwell up to 9. After not laying another land, Blackwell drew for turn 7 and packed up his cards.

Long started off game 2 identically to game 1, summoning a second turn Llanowar Knight and turn 3 and 5 Titania's Chosen and Scragnoth. Blackwell looked to be in real trouble when he laid nothing but land on turns 1 thru 5. Then on turn 6 he stopped Long dead in his tracks when he summoned a Ruham Djinn. Long smiled and dropped a Wildfire Emissary hoping to push through a little extra damage. Again Blackwell had a great answer, dropping the 5/6 Zanam Djinn, and a turn later a King Crab. After passing the turn and seeing Blackwell cast another monster, the Armored Guardian, on his next turn Long cast an Alloy Golem naming white making it the most common color (Llanowar Knight, Alloy Golem, Armored Guardian), allowing him to attack with his Scragnoth. Long then tried to Wallop the flying Djinn but Blackwell turned all creatures on the board red via a Sway of Illusion. Long then thought for a while and played a gambit which would allow him to either win or lose the game, as he felt that if the game kept going he would lose anyway. He held a Surge of Strength and a Parch in hand which would allow his Surged Golem, (10/10 trample), to charge over the top of the blockers dealing the final points of damage, provided that Blackwell blocked in what was the most sensible way, allowing the 2/2 Chosen through. Blackwell made the mathematically correct play and after reading Surge of Strength twice shook Longs hand.

Despite the slow starts in both games Blackwell commented that his deck had enough early casts to see him summon one in at least one game.