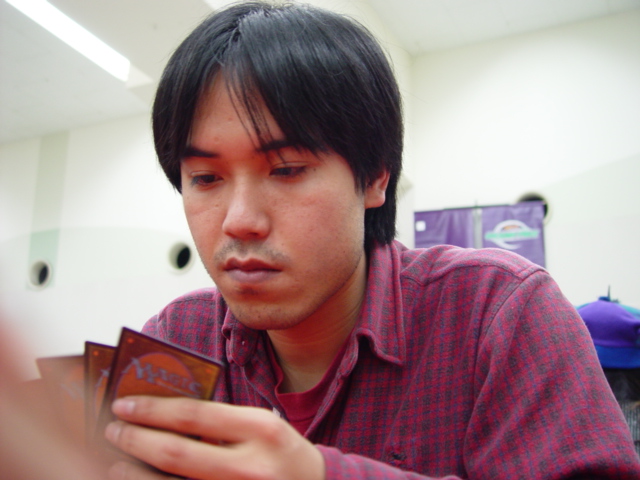 Osamu FujitaOsamu Fujita is probably best known as the reserved third wheel on the Japanese super-tricycle Anchans, alongside Great Brain Itaru Ishida and Quicksilver Katsuhiro Mori. His opponent, Koichiro Maki, is usually found on the other end of the table, reporting for the Japanese Sideboard. Unfortunately for Maki, Fujita has brought three bags of beatdown to the table in his red-green deck. Maki will be using blue-white-green to try and fend off the assault.

Fujita matched Maki's Mystic Visionary with a Seton's Scout, but was brutalised when Maki showed him Psionic Gift. Lucky for Fujita, Maki didn't have a third land. That gave him time to play Chainflinger and wreck the Visionary without taking too much pain.

Maki found a third land and made an Auramancer, getting back his Gift. Fujita answered with Krosan Archer. Maki continued to find defenders, this time with Pilgrim of Virtue. Repel slowed Fujita down a turn, but it wasn't looking good for Maki. He tried to Gift up the Pilgrim, and Fujita responded by pitching Fiery Temper to smash it.

With the three-toughness body out of the way, it was Fujita's cue to bring the noise. Pardic Firecat hit the ground swinging. Maki could only tap out for Aven Flock. What followed was brutality. Maki swung with his Auramancer only to be surprised by a pitched Basking Rootwalla. Fujita then untapped and showed his second Fiery Temper, attacking for nine. 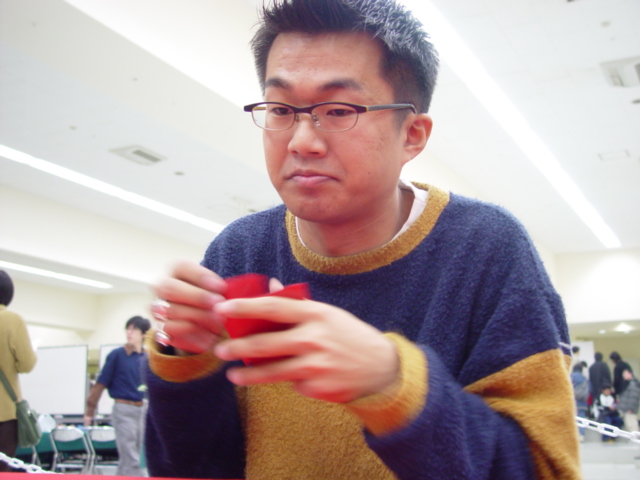 Koichiro MakiMaki played yet another Auramancer, and hoped that Embolden would help save him. Fujita let him stave off damage, then aimed a Sonic Seizure at the dome for the win.

Maki mulliganed a one-lander in game two. Fortunately, Fujita's draw was slow, with just a Krosan Restorer by his third turn. Maki was safe behind his Mystic Zealot. Fujita tried to bust out with Werebear and Ember Beast, but Maki had Kirtar's Desire handy. While Fujita continued the slow buildup with Krosan Archer, Maki put his offense on hold with Psionic Gift.

Lucky for Fujita he hadn't shown his Bomb Squad yet. He was still swinging for two, the threat of Fiery Temper keeping Maki from blocking. Maki stopped that nonsense with Stupefying Touch. Fujita responded by throwing away two Fiery Tempers to take down the Zealot.

Pardic Firecat brawled in, but before Fujita could get his one-toughness army going, an Auramancer acquired the Gift, as well as a Floating Shield against red for good measure. For two turns, Fujita hit with his Archer alone. Then Maki made Narcissism with his only green mana, making attacking very unattractive. Fujita showed him how it was done by plucking Overrun. Maki checked the math, then scooped.