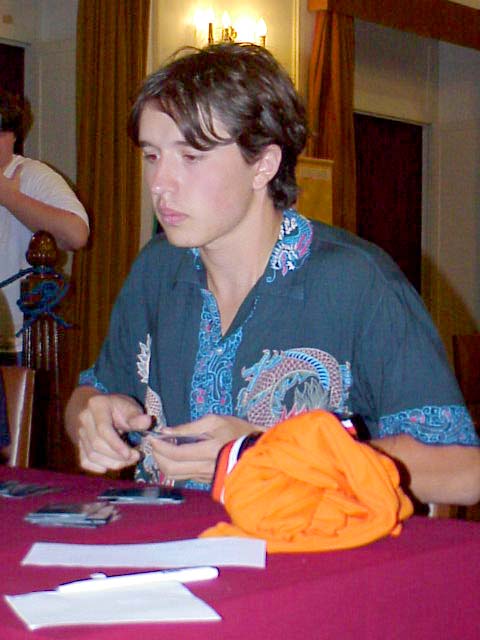 One of Latin America's finest faced off against the young American in this ninth round of Grand Prix Rio. Despite his claims to the contrary, Justin has a solid B/R/U while Rafael was one of the two Green drafters at the table building a very strong G/R/b deck. He drew in the eighth round versus his good friend Damian Brown-Santirso while Justin tied his match when he ran out of time and couldn't win it in the extra turns.

After a mulligan from Le Saux they were off to a flying start. Justin opened up with a Viashino Grappler and a Ancient Kavu while Rafael played a Kavu Agressor. They traded blows for a few turns before Le Saux played a Caldera Kavu that died during the following turn under the kicker from a Shivan Emissary.

The Chilean's mana base improved due to a Harrow and he used a Simoon to get rid of the Grappler and the Emissary. Schneider snapped back with an Alloy Golem but it quickly lost its status as the biggest creature to an opposing Jade Leech.

The American had a great blocker in his next creature, Metathran Zombie, so they took a couple of moments during the lightning fast turns to trade a few trash talking lines accusing each other of being extremely lucky. The Agressor got bounced to make way for a Horned Kavu. That play drew a few comments from spectator David Williams.

The match heated up as Justin played a Kavu Agressor of his own, with the kicker. The fight seemed to be centered in the trash talk and not in the table but you could plainly see their eyes darting around looking for a hole in the opposing creature wall. A Magma Burst took out Schneider's Agressor but he had another Grappler to replace it.

In came a Pincer Spider on the Chilean side, as he waited patiently for more mana to empty his great hand. His four card hand dwarved Justin's single card hand yet the creature wall kept him back turn after turn. The American bounced the Horned Kavu and the Jade Leech with a Rushing River and sent the whole army in.

The Chilean used a seldom seen Falling Timber, with kicker, to minimize the pain but his back was squarely rammed into the wall. He couldn't find a solution for the horde during the next turn, and conceded admist some extra American trash talk.

Despite the trash talk they traded sincere good luck wishes. Between the games the tension eased off and they talked about the draft and the decks in a friendly tone. But as soon as the game started the game faces came back on and the mockery resumed at full speed.

Rafael played a Rogue Kavu and Justin played a Duskwalker, without kicker intending to trade. The Kavu gave way to a bigger creature, a Horned Kavu, that started taking huge bites out of Justin's life points. The Kavu family got bigger with a Mire Kavu on Justin's side and a Amphibious Kavu on the Chilean's side. A Magma Burst took out the Mire Kavu to make way for another attack and the little Duskwalker had to jump in the way to slow the bleeding.

The American was trying to buy some time but Le Saux was on fire, replaying the Rogue Kavu and adding a Caldera Kavu to the charge. A Crosis' Charm killed the Horned Kavu but it was too little, too late. Justin conceded still waiting for a saving Island facing four creature with no blockers. Another win for the Kavu nation.

After a lightning fast second game both players took a deep breath and prepared for the decisive match with 30 minutes still on the clock. After extensive shuffling Rafael was forced to mulligan. 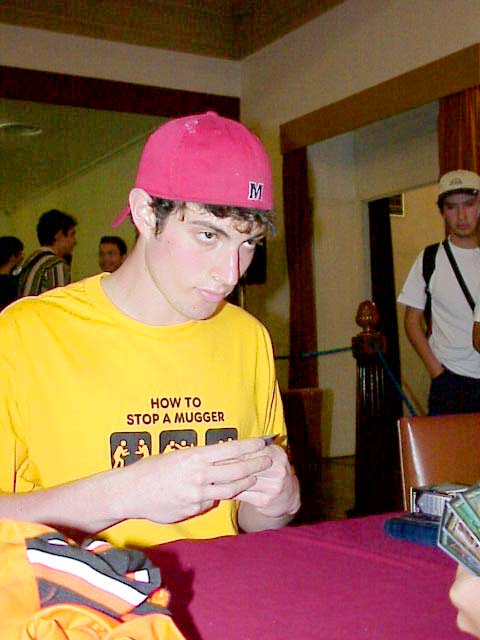 This time Justin came to play, dropping a Kavu Agressor followed by a Viashino Grappler. Rafael also had a Kavu Agressor and he used an Harrow to get a Swamp, the precious third color. He played a Horned Kavu. That Kavu got very small under an Exotic Curse and quickly jumped in the way of an incoming creature to minimize the life loss.

The next creature from the Chilean was even bigger: a Serpentine Kavu. Schneider bided his time, playing an Alloy Golem and a Darigaaz's Attendant. The creatures kept piling up with a Yavimaya Barbarian and two Kavu Agressors, one with kicker, on the Chilean's side. A kicked Rushing River from Justin broke Rafael's wall, making way for an extra attack.

Le Saux couldn't rebuild in time and the American came in for the win in the following turn. Justin wished Rafael good luck and left to celebrate his win while Le Saux picked up his teddy bear and left to tell thi sad tale to his friends.