Both opponents were undefeated going into this round. Frank's aggressive counter-sliver deck has been smashing opponents left and right, running under the power of crystalline and muscle slivers. Swarowski's Sligh deck, although the lucky recipient of a few top decks during the day, was still doing what Sligh does best, burning out people left and right. This match was going to be fast, furious and explosive. 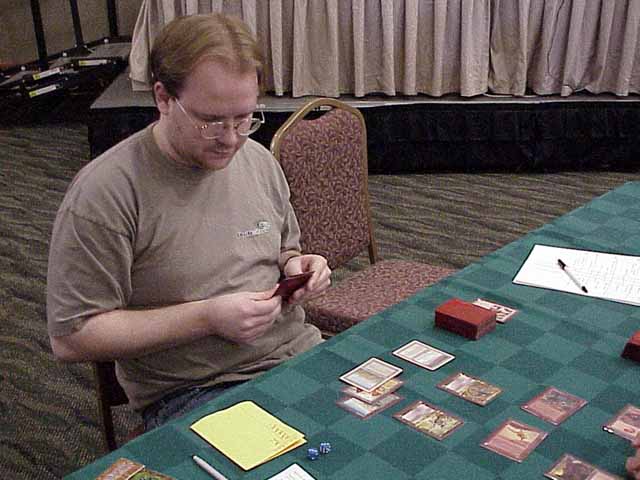 Joel won the roll and started off with a scrubland, duress. Rob's hand revealed a mountain, 2 Shocks, a Jackal Pup, an Incinerate, a Goblin Patrol and a Cursed Scroll. Joel took the shock and passed the turn with Rob laying mountain, pup on the next turn. Joel then played a tundra and a Hibernation Sliver looking to take advantage of the sliver's special ability to return itself back to the owner's hand. Rob promptly shocked the sliver on his turn, which was returned, and attacked with the pup putting Joel at 16.

Recasting the Hibernation Sliver, Joel then laid a city of brass and passed the turn. Rob attempted to Shock the sliver during his turn, which again was returned, and then attacked with the pup. The pup though went to the farmland as it was the lucky recipient of a Swords to Plowshares from Joel. Once again, the Hibernation sliver was recast which Rob responded by casting a goblin patrol and a Mogg Fanatic.

Joel came right back by casting an acidic sliver and laying a Flood Plain. Rob paid the echo on his Goblin Patrol and attacked with both the mogg fanatic and patrol. Joel blocked both, put damage on the stack and returned both slivers to his hand after Rob attempted to sacrifice his Mogg Fanatic to kill the sliver that blocked it. He finished his turn by laying a cursed scroll. Joel used the Flood Plain to get a Volcanic Island, cast and used a seal of cleansing on the scroll and finished it off by recasting the highly durable Hibernation Sliver. Rob had no answers and simply did nothing on his turn.

Taking advantage of this lull, Joel attacked with his Hibernation Sliver. Then he recast the Acidic Sliver in his hand. Rob laid a Wasteland and Incinerated Joel during the end step. Joel attacked and took Rob down to 16. Rob attempted some offense with a Cursed Scroll, but with a Seal of Cleansing cast by Joel next turn as well as a muscle sliver, Rob's chances didn't look good. With Joel at 4, Rob went for the win by Wastelanding Joel's only open land, a city of brass, and then sacrificed both his mountains attempting to Fireblast Joel out. Unfortunately for Rob, Joel had the Force of Will ready and took game 1. 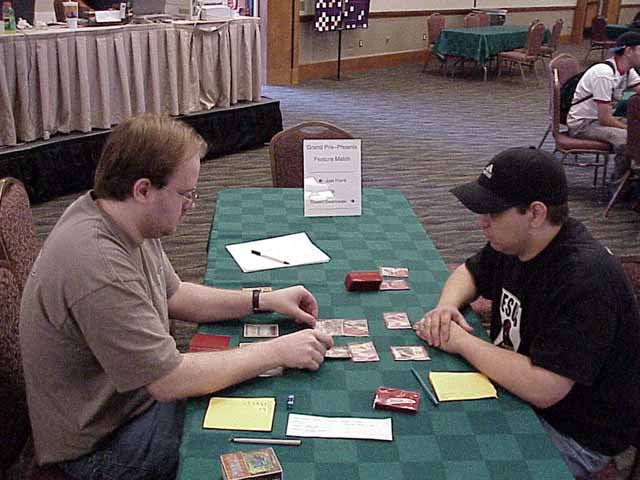 Joel started off mulliganning to 6 cards with Rob starting off this game with mountain, fanatic. Joel could only muster up a City of Brass. Rob attacked with the fanatic and passed the turn in which Joel laid a scrubland and casting a crystalline sliver. Rob answered with a pyroblast which Joel Force of Willed discarding a Hibernation Sliver. Rob laid a mountain, cast a Ball Lightning and barreled in with it. Joel took the beating going down to 11 life. Joel laid an Underground Sea on his turn and passed. Rob, faced with a Crystalline Sliver on the other side of the table simply passed the turn. Joel put out a Muscle Sliver and attacked with the crystalline. Rob cast a hammer at Joel putting him at 8 life. Joel cast a Winged Sliver and attacked with his other slivers putting Rob at 12.

Rob attempted to anarchy which Joel quickly put a stop to with a timely Counterspell. Joel then drew and cast the lone card in his hand, a muscle sliver. Joel pondered for a long time trying to figure out how to attack in this delicate situation. He finally decided to attack with his Muscle and Winged sliver. Rob, though, made the blocking point moot though when he simply untapped, Incinerated and Fireblasted Joel out taking game 2

There was little talking between the competitors as the started game 3. Joel laid a flood plain while Rob laid a mountain and a jackal pup. Joel sacrificed the flood plain during his upkeep to get a tundra and then cast a hibernation sliver with the city of brass he laid down as well. Rob played a mountain and incinerated the hibernation sliver, which was returned. He attacked with the pup putting Joel at 15 life. Joel laid a volcanic island and passed the turn. Rob once again attacked with the pup and attempted to cast a cursed scroll. Joel countered, which Rob Pyroblasted, which Joel answered right back with a alternate casting costed force of will.

During Rob's End step, Joel tapped his city and consulted for a crystalline sliver and in the process, burning through nearly half his library. Joel dropped a tropical island and casted the crystalline sliver as well as a muscle sliver. Rob dropped a mountain and came running in with a freshly cast ball lightning taking Joel down to a precarious 4 life.

After a turn of not much action from either players, save a pup that was casted on Rob's side, Joel took the offensive. He casted an acidic sliver and attacked with the muscle sliver. Rob casted an Anarchy, which in response, Joel sacrificed his CrystallineSliver to kill one of the two pups on Rob's side. Joel took a damage from his city of brass though, leaving him within incinerate range. Joel attacked with the acidic sliver on his turn leaving the muscle sliver back on defense. Rob attacked with the pup which was blocked by the muscle sliver, damage was put on the stack, and then thrown at Rob's head for a total of 4 damage putting Rob at 9 life. Rob cast the jackal pup in his hand and again passed the turn.

Joel once again attacked with the Acidic Sliver which was blocked by Rob's pup. Damage was put on the stack and then was thrown at Rob's head, putting him at a critical 5 life. A couple turns passed with neither players doing too much until Joel casted a hibernation sliver. Rob untapped, attempted to incinerate Joel, which was force of willed, in which Rob responded by shocking Joel and taking game 3.