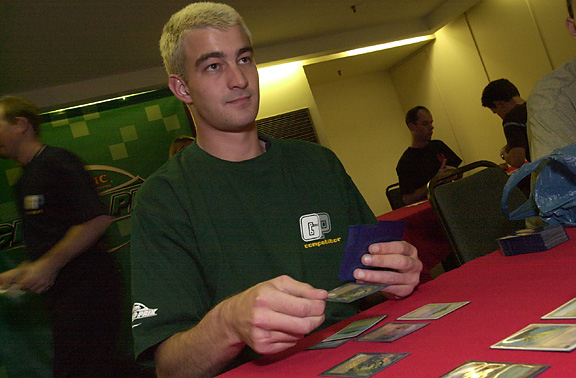 Dave Humpherys is known for many things but one thing about him that few people know is that he defeated Terry Borer in the first ever Pre-Release tournament in Toronto, Canada. The set was Ice Age and Dave fondly remembers beating Terry down with an Arctic Fox.

And speaking of Arctic Fox, Dave's opponent - Australian party boy Sam Ward - is sporting a new blonde hairstyle and has been getting little sleep each night at a local hostel as he chats with other travelers into the wee hours. Rumor has it that the large crowds of young women screaming outside the Grand Prix are Sam's personal retinue and loyal fans, but they may just be waiting for the Backstreet Boys to make an appearance later this afternoon.

With both players at 6-2, neither of them wanted a draw but they figured there was a high probability of that occurring as each player was playing CounterOath and Dave has a reputation for careful play - something he's putting an effort into fixing. Everyone settled in for a long match.

Dave made the first move as he attempted to cast a third turn Sylvan Library that was Mana Leaked. He attempted a Spike Weaver the next turn but it was Counterspelled. Sam returned the counters to his library with Gaea's Blessing and used a Seal of Cleansing on Dave's just-cast Abundance.

After that initial flurry of spells, they both played a bunch of lands before Dave Tutored for another Sylvan. Sam Counterspelled the Sylvan but Dave had a Forbid. Sam let it through and calmly used a Seal of Cleansing to get rid of it on his turn. Dave Tutored for another Sylvan (he had Blessed the first one back into his deck earlier) and after another Counterspell/Forbid counter battle, Sam chose to Seal of Cleansing that one as well.

Dave looked a bit frustrated that Sam had all the answers and did nothing else but lay land for the next few turns. Sam didn't have that opportunity as he kept drawing spells and was forced to discard Crater Hellion, Spike Weaver and two Swords to Plowshares - which he would regret later. Dave brought out a Treetop Village and Sam picked a Wasteland off the top of his library and killed it to the delight of the crowd. Dave tried Abundance and it was countered as well.

The Oath on Oath matchup is all about creature lands, as neither player really wants to tap out to cast an actual creature and risk their opponent using Oath of Druids to bring out Morphling. Sam seemed to forget that as he cast a second Blessing and retrieved his first Blessing and two counterspells instead of a Treetop Village or Wasteland. This would turn out to cost him as Dave eventually played a Village and a Faerie Conclave and began attacking for five. Sam had a maindeck Pyroblast solution to the Conclave, but with only one Wasteland and one Blessing left in his library to handle the green manland, he was unable to stop the tree-loving villagers from trampling him to death. 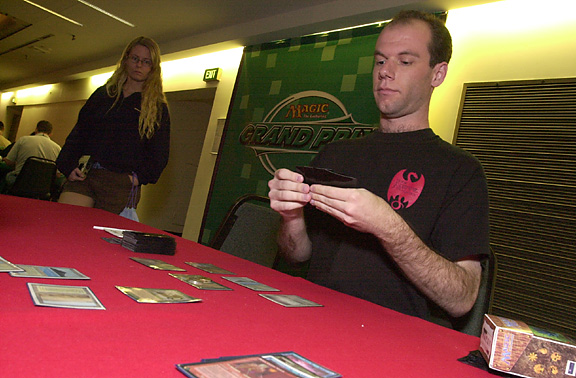 Sam took three Oath of Druids, three Enlightened Tutors, a Circle of Protection: Red and the Crater Hellion out of his deck for more potent, but unrevealed, sideboard cards. Dave, who was in a big hurry to begin the first game and played very quickly as he didn't think he could defeat Sam's maindeck Pyroblasts, was in a lot less of a rush for the second go at it. As usual, both players did nothing but put lands into play for the first five turns whereupon Dave laid a Powder Keg followed by a Seal of Cleansing.

Sam's first play to Wasteland a Treetop Village allowed Dave to reveal a surprise sideboard card - Teferi's Response! Sam wisely decided to Pyroblast to prevent Dave from keeping his Village as well as drawing two extra cards. Dave never drew into any counterspells but Annul and continued to tap out each turn in an attempt to get a threat down. Sam countered a Spike Weaver, Abundance and Spike Feeder before casting a Spike Weaver of his own. Dave attempted the Plow but it was Counterspelled, which he Force of Willed, but Sam had a Force of Will of his own to retain board control.

With the Weaver in play and ready to hit for three a turn, Dave played a Morphling hoping that Sam had nothing left to stop it but Sam had the Counterspell and added insult to injury by drawing a Morphling of his own of the top and putting it into play. Dave tried to build up counters on his Powder Keg but it just wasn't enough as he fell to creature beatings.

With six minutes remaining, Sam offered the draw but Dave wanted to attempt to finish a game. Sam didn't want to make mistakes by rushing but after a very valid one-land hand mulligan, it was quickly apparent that they would not be able to finish. With five extra minutes things may have been different as Dave opened with Conclave, Village and Village as his first three land, but we'll never know!