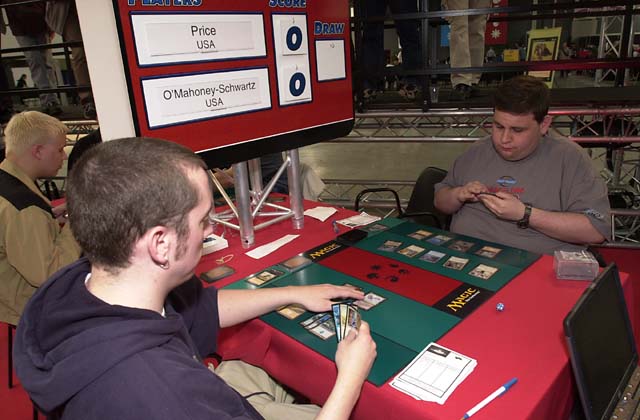 In the previous round, two Champions of Pro Tour LA faced off - Tommi Hovi and Shawn Regnier. This round's feature match sees two champions in more recent years. David Price won the Tempest Block Constructed event back in 1998, while Steve won the "Pro Tour-Pestilence" Urza's Saga Draft event. Both of these players are New Yorkers and have worked together on many events in the past.

David had to mulligan a hand containing a Crimson Acolyte as his only spell. Six land and one spell isn't a keeper usually in any case, especially not as he felt fairly sure Steve wasn't playing Red. His mulligan hand was a little better, and he played a turn three Sparring Golem, followed by a Zanam Djinn on turn five - sacrificing an Ancient Spring to cast it.

Steve's Samite Elder, Crimson Acolyte, and Vodalian Zombie were no match for the flyer, but he had Recoil in hand to make Price pay for sacrificing the land. Price had no way to recast the Djinn immediately, and decided to hold back with his Sparring Golem as well to deter Steve from attacking.

OMS had only three lands in play, and Price had five, with both players on sixteen life. Three lands looked like it might be enough for Steve anyway, as he played both Sunscape Familiar and Stormscape Familiar in one turn. David summoned a Silver Drake, gating the useless Crimson Acolyte he had drawn.

With the Samite Elder in play, the Silver Drake couldn't attack as Steve could block it with his Stormscape Familiar, but the Sparring Golem continued to swing in, bringing Steve to twelve. OMS topdecked a Sawtooth Loon which he used immediately. He had the option of Gating the Loon itself, but chose instead to bounce the Crimson Acolyte, which he put on the bottom of his deck.

Price still hadn't drawn the sixth land to cast his Zanam Djinn, and now Steve had a massive advantage, even though he was on ten life. The Loon had given him some bombs, and he first unloaded a Vodalian Serpent with kicker. Dave summoned a Faerie Squadron, but the Samite Elder rendered the air force impotent.

The Serpent swung in and Price chumped with Crimson Acolyte. OMS followed up with a Samite Archer. Dave attacked with Sparring Golem and Faerie Squadron, using his Aurora Griffin to prevent Samite Elder from giving Steve's creatures Protection from Blue. Steve had a Dismantling Blow to kill the Golem, and used Rushing River to clear a path for a massive attack. Price had no blockers and sucked up eleven damage. He couldn't play enough blockers, and Steve's next attack finished the game. 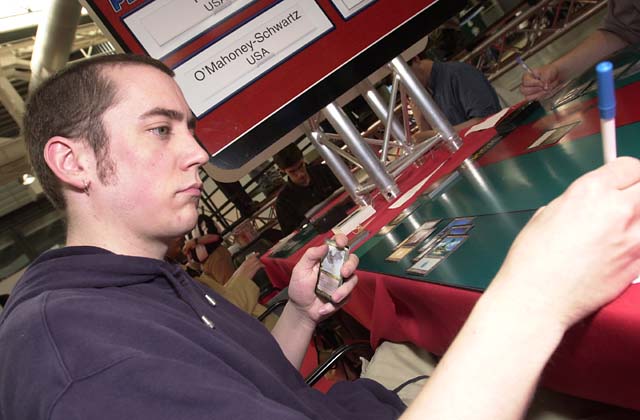 This time it was Steve who had to mulligan. Steve had nothing for the first four turns, but he wasn't under too much pressure as David could only beat down for two with a Dream Thrush and a Samite Pilgrim. Price summoned a Faerie Squadron with Kicker on his fifth turn, and OMS could only Opt into a Stormscape Familiar. He didn't have a source of White mana at this point, and continued to take damage from the fliers.

He couldn't even trade the Stormscape Familiar for the Dream Thrush because of Price's Samite Pilgrim. Steve used Recoil and then Rushing River to keep the Faerie Squadron at bay, but wasn't drawing a permanent solution. Not until Steve was down to seven life did he finally draw a Plains.

His Sawtooth Loon was still not enough to hold off the Faerie Squadron, but Price decided to Death Bomb the Loon anyway to make sure. Steve used Barrin's Unmaking to prevent the loss of life, but still, he was on two life facing three flying creatures. He replayed the Loon, but it's card-drawing ability didn't find him another flying blocker, so he scooped. 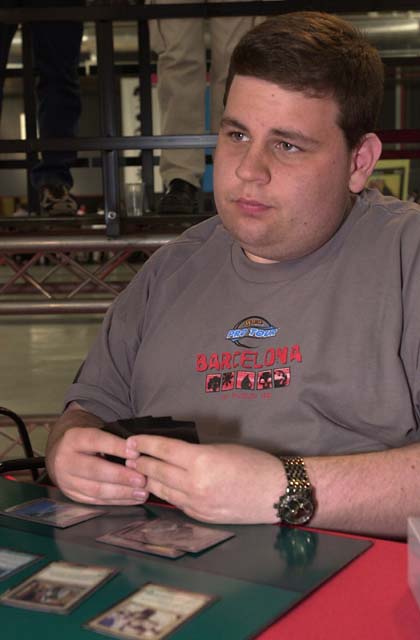 Every game this match had a mulligan. Dave had to take one in the third game, which began with only twelve minutes remaining on the clock. Steve played a second turn Ardent Soldier, and Price played a Samite Pilgrim. His mulligan hand was still heavy on land, though, and his only other spell was a Strength of Unity.

OMS played a Sawtooth Loon and then attempted to recast the Ardent Soldier, this time with kicker. But by now David had drawn an Exclude. The Loon attacked in the air, and Price enchanted his Pilgrim with Strength of Unity and attacked back. He played a Stormscape Apprentice as well, but now his hand was all land.

Steve played a Vodalian Serpent, and then a Cavern Harpy returning the Sawtooth Loon. Needing to end the game inside seven minutes by this point, he did not replay the Loon, instead summoning Samite Elder. Price attacked with the Pilgrim again, and summoned a Zanam Djinn.

OMS used his Samite Elder - Sawtooth Loon combination to make the Vodalian Serpent and the Loon unblockable, and attacked for what would be the kill, but Price used a Pollen Remedy with kicker, but this only allowed him to survive for one more turn, and Steve took the match with another all-out attack, just as time was called.