"Ben's deck is like, fifteen first picks and eight third picks," Juza whined with a smile as he sat down to face his teammate and friend in the ninth round of competition at Pro Tour Dark Ascension. Ben Stark (no relation to this author) was a renowned Limited strategist, and the go-to man for team ChannelFireball for determining the cut of new Limited formats. His advice had been in high demand on the weekend at the world debut of the Dark Ascension/Innistrad format at the professional level without the assistance of Magic Online.

Juza had come this far in the event with his teammate's help, but now he'd be left to his own devices to try to beat the Limited mastermind that was Stark. 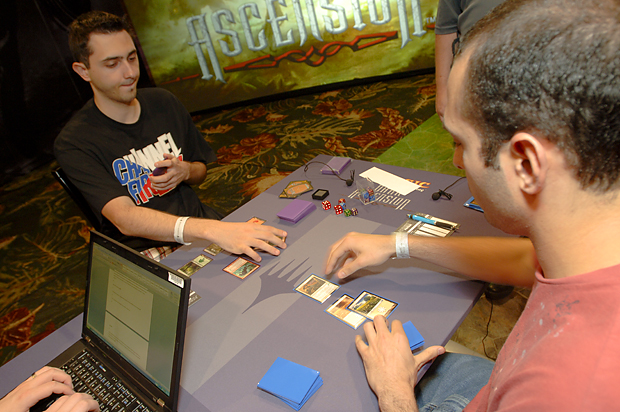 Teammates Martin Juza and Ben Stark are paired against each other in the first round of Saturday.

Champion of the Pariah and Chapel Geist led the way for Stark, who appeared to be playing a mono white deck as he opened on three Plains. His opponent, meanwhile, took three turns before finally casting an Ulvenwald Bear with no morbid trigger. Travel Preparations with flashback made Stark's team even more imposing.

"Give me a chance," Juza sighed as he reached for his pen to mark life totals.

A second copy of Travel Preparations, once again with flashback, the following turn left Juza's head spinning. "I have to chump block on turn four?" He cried, before adding after some math, "I'm just dead..." 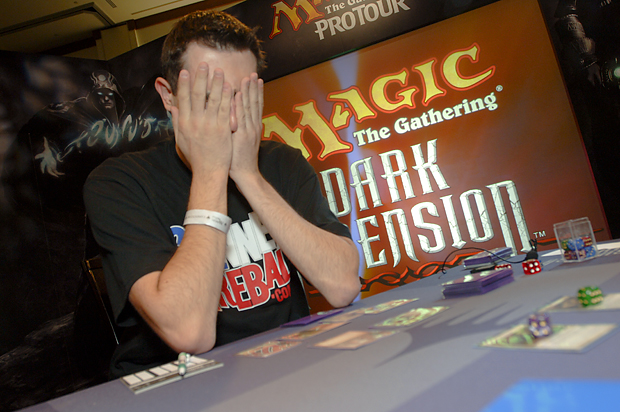 Is it over yet? Can I look now?

"That was a close game," Juza teased his opponent as they shuffled for the second game.

The second game started off a bit more smoothly for the Czech Republic's Juza, who had a two-drop in the form of Hinterland Hermit to face down his opponent's copy of Loyal Cathar. A Kessig Wolf joined Juza's team and his Hermit turned the Cathar into an Loyal Cathar with a chump-block; Stark added a Thraben Heretic to his team, then lost his Cathar to a Forge Devil from his opponent.

The ChannelFireball team had determined that the new draft format was all about aggro, and the ninth round feature match seemed to indicate they were correct. The players traded combat blows back and forth with small two-power creatures ruling the red zone. A Ranger's Guile for Juza took out one of his opponent's threats while a Fiend Hunter for Stark returned the favor. The game churned on but it looked like the deciding factor would be Stark's mana screw: he was stuck on three plains while his opponent had all he needed and refused to miss a spell drop.

After a few turns of missing on his fourth mana Stark packed it in. "So all I have to do is have the perfect draw?" Juza asked no one in particular.

"Mana screw. That's what happens when you draft a deck this good," Stark murmured, shuffling his cards.

While sideboarding for Game 3, and I swear this is true, Stark and Juza debated strategy for getting lunch at Subway. "Sometimes you've gotta double meat," Stark remarked of the popular American chain sandwich shop. "They skimp on the meat!"

Juza spent the opening of the final game in the match agonizing over whether he should mulligan, then after deciding he should, he debated whether he should do it again. He resignedly kept his hand of six and was soon being pummeled by a Thraben Heretic wearing Bonds of Faith while his Hinterland Hermit tried to work the red zone in his favor.

Thraben Sentry expanded Stark's team, though he had only Plains on the field and no Forests to cast any of his Travel Preparations. A Sever the Bloodline from Juza took care of the Heretic without triggering his opponent's Sentry and for a moment Juza seemed to have stabilized. 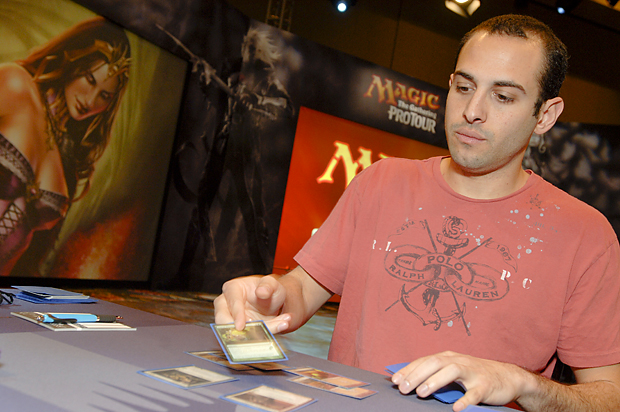 Stark tries to find a path to victory without any Forests.

A Festerhide Boar fully powered hit for Juza while he used a Forge Devil to knock out his opponent's Thalia, Guardian of Thraben and, though he had defined himself as the underdog in the match, it looked like Juza was going to win on the back of two mana screwed games from Stark. Chapel Geist wasn't enough to hold back the tides of Juza's forces with Kessig Wolf and Pitchburn Devils breathing down Stark's neck alongside the Boar and Forge Devil.

"There's nothing good than can happen here for me," Stark said resignedly, trying to figure out a profitable block as his opponent continued pressuring him in the red zone.

The life totals stood at 11-5 in Juza's favor and Stark felt he had no choice but to alpha strike with his only creatures: Thraben Militia (formerly Sentry) and Loyal Cathar (formerly Loyal). Juza went into the tank to figure out blocks, but opted to take 7. As soon as he did so his opponent extended his hand in defeat.

"Good game," Stark said, disappointed in his mana screwed loss but respectful of his friend's victory.