Team Lovespell, composed of Alex Borteh (A), Chris Benafel (B), and Eric Froelich (C) is no stranger to playing on day two. Composed of seasoned veterans, the team has quite an impressive stats sheet, including multiple Pro Tour Top 8s and Grand Prix wins in the past year.

On the other hand, Team ODB, made up of Peter Leiher (A), Sam Fog (B) and Mike Long (C) play regularly at Long's store in VA. With the exception of Long's Top 8 at Nationals this year, the team has been out of the limelight recently, but they are looking to change that this weekend. 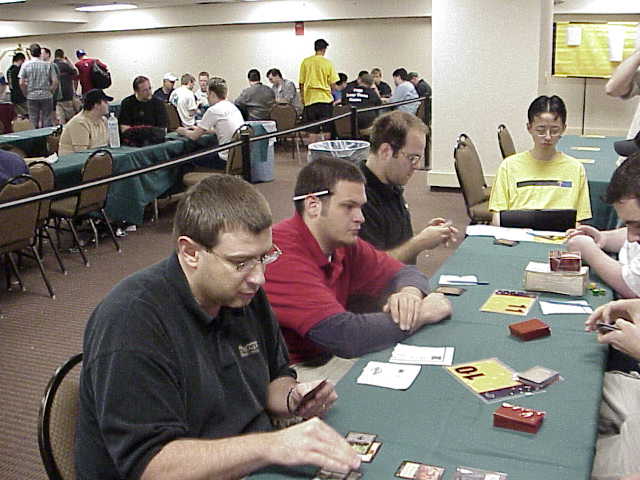 Due to a drafting procedure violation (Not picking a card in time), Leiher started the match down 1 game. Leiher got off to a fortuitous start, playing one of each land and dropping Skywing Aven. Borteh responded with a Dusk Imp. Going aggressive, Leiher Faceless Butchered the Dusk Imp and swung with the Skywing Aven. Things slowed down a bit as Borteh played a Soul Scourge and a Pardic Firecat to hold off Leiher's freshly cast Treacherous Werewolf and Phantom Nomad along with the already present Butcher and Skywing Aven. Borteh killed the Butcher with a Toxic Stench and a Firebolt, and the Firebolt was flashbacked to kill a Battlewise Aven. A Barbarian Bully came out for Borteh, but Leiher played the three casting cost moat AKA Psychatog as well as an Aven Cloudchaser. Borteh got tricky and tried to use his Barbarian Bully twice in one turn when it attacked, but an onlooker alerted a judge who rectified the problem. Things were still at a standstill when Borteh cast Skeletal Scrying for five, threatening to break the game wide open. Leiher realized he was in a bad position in the long run, and started to get aggressive, attacking with his flyers. The Dusk Imp traded with the Aven Cloudcahser, but Borteh still had a tough-to-kill Skywing Aven to deal with. Borteh ripped Chainfliger, which was a permanent answer to the Aven. Leiher increased his life lead by summoning Ancestor's Chosen. Borteh applied serious pressure by playing another Soul Scourge and then Morgue Thefting his Dusk Imp and replaying it. He tried to race the Psychatog and Chosen, but his plans were foiled when Leiher Cagemailed one of his Scourges and played Mortivore. Borteh played Soul Scourge #3 and a Barbarian Outcast, which could take one for the team next turn. Leiher, who would die next turn to the two Scourges, sent in his whole team. Chainflinger and Barbarian Outcast stepped in the way of the big Mortivore and potentially big Psychatog, making Mortivore even bigger in the process. Borteh would win next turn if Leiher didn't have two answers to his Scourges, but the last two cards in Leiher's hand were two Skywing Avens. Boretah drew his next card, and packed it up.

Game 3 started better for Borteh, as he plays a Barbarian Bully, a Chainflinger and then Jeska, Warrior Adept in consecutive turns. Leiher had the answer with Angelic Wall and a Pilgrim of Justice to hold off the beats. A Teroh's Vanguard traded with the Outcast with a little help from Jeska. Lehier played Aven Cloudchaser, hoping that Borteh didn't realize that 1+1 =2 and it would be dead. Instead, Borteh cast Acceptable Losses on the wall and Fiery Tempered the Aven Cloudchaser as a madness cost. Leiher Butchered Jeska on the next turn, and Borteh Scryed for 3. A Soul Scourge and Possessed Barbarian came out for Borteh in the next few tuns. Lehier played a Skywing Aven with Chainflinger on the table, but when Borteh tried to fling it, the damage was prevented by Pay No Heed. Leiher then attacked with the Aven and played Psychatog. Borteh drew nothing but land, but he was controlling the board with the Barbarian and Chainflinger and attacking with the Scourge. However, he was slowly losing life to the Pilgrim who was serving steady beatings. Possessed Barbarian had to chump the Psychatog on the ensuing attack since Borteh was already at seven due in the most part to Pilgrim Beats. Leiher then played the big man: Ancestor's Chosen. Borteh topdecked a Thermal Blast for the Butcher to make it interesting. With Borteh at four, he blocked the Ancestor's Chosen and the Psychatog with Jeska and Chainflinger respectively. The first strikers took care of each other, and then Borteh pinged Leiher down to three. Leiher then played the Skywing Aven that had been in his had most of the game. Borteh was left with only a Soul Scourge and hoped to draw a removal card for the Skywing Aven or one of his three Soul Scourges, but ironically drew an Innocent Blood. 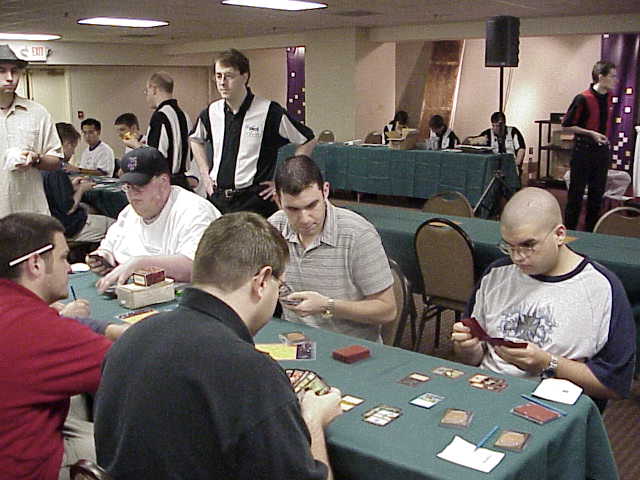 Mike Long stared off the game with five straight swamps and EFro played a Cephalid Looter and slowly improved his hand as he casted a Balshan Collaborator. Long finally drew a forest and played Harvester Druid, giving him access to additional green mana the next turn. EFro responded with a Mirror Wall. Long then played the deadly Phantom Centaur, but EFro had the answer with a Lost in Thought. Long then played Thriss, Nantuko Primus, but it didn't stop the Mystic Familiar or the Hydromorph Gull that EFro cast. Long got techy with Canopy Claws, and it grounded the Gull (Blocked by Thriss) but his attempt to flash it back to take out the Collaborator was Syncopated. A Coral Net on Thriss limited Long to 1 card in his hand every turn, forcing him to decide to play a spell or lose Thriss each turn. Long was taking too much damage from the flyers, and a Benevolent Bodygaurd enabled Mirror Wall to serve the final damage.

Game 2 started off fast with EFro playing Mystic Familiar, and then supersizing it with a Wormfang Drake. Long countered with a Seton's Scout and a Krosan Archer. The Archer was Coral Netted, and Long buried the Archer next upkeep in order to keep his cards. Long then played a Rabid Elephant, and next turn did a little supersizing of his own with an Arcane Teachings on his Seton's Scout. EFro took seven to the face, and cast a Teroh's Vangaurd at the end of the turn. The Vanguard then got upgraded via Wormfang Drake #2. Long attacked with the Scout and Elephant. EFro blocked the Scout with his Drake and then tried to Guided Strike. Long Wastes Awayed the Drake in response. A Shade's Form on the Rabid Elephant was Syncopated. The Seton's Scout held back and traded with the Drake. Long then played a Painbringer, which slowly killed off EFro's creatures as he drew nothing but land.

Game 3
Long started off fast with Seton's Scout and then enchanted it with Shade's Form. EFro responded with a Looter and then Lost in Thought'ed the Scout to stave off the beatings. Long had no play and got more land with Far Wanderings, and on the next turn played a Zombie Assassin. EFro followed with a Hydromorph Gull, Benevolent Bodygaurd and a Mirror Wall. Long, who was not drawing the best of two cards each turn could only play a Harvester Druid. On the next attack phase, Long Canopy Clawed the Hydromorph Gull, then blocked it with the Zombie Assassin. EFro attempted to Guided Strike the Hydromorph Gull. Long tried to use the Assassin's ability in response to the Strike, but the Bodyguard made sure the Gull lived. Long had nothing and after chumping with Harvester Druid he Scryed for one. His next spell- Thriss, got Rites of Refused, and Long packed up his cards in disgust. 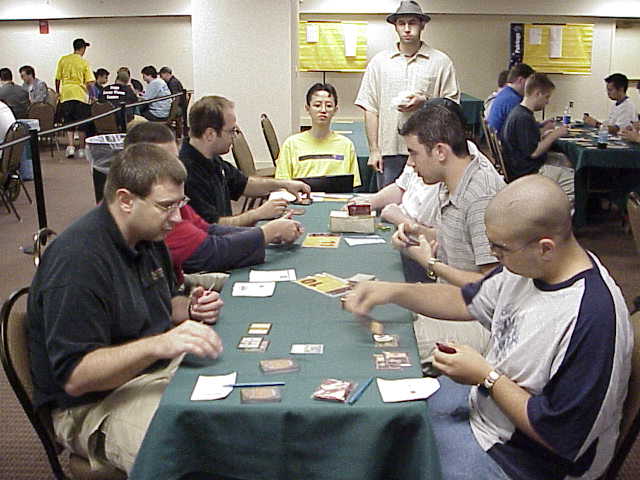 Things started off fast with Benafel playing a Harvester Druid, Anurid Barhopper and a Narcissism and Sylvan Safekeeper. He got into trouble, however, when Fog played an early Wormfang Drake (covering up Hapless Researcher), and then Petravarked Benafel's only forest. Benafel was then forced to trade Olle Rade and a Toxic Stench to kill the Petravark and get his Forest back. Benafel was land light, and even with Narcissism he was slowly losing the damage race to Fog's flyers. A thresholded Kamahl's Sledge ended Benafel's misery and they shuffled for game two.

Game 2
Benafel's Nantuko Tracer traded with a Hapless Researcher. Once again, Fog Petravarked Benafel's forest, but Benafel had more then one this time. A Nullmage Advocate got Syncopated, but Benafel's second Nullmage resolved. Benafel's next creature, Springing Tiger, got killed by Acceptable Losses. The third Nullmage Advocate came out, and his Soul Scourge traded with Pyromania and a random land. One of the Advocates got Liquified, as the other Advocate got bigger with the help of an Ironshell Beetle. Fog played a Pardic Firecat and Skywing Aven. Benafel then played Narcissism, and forced Fog to trade his creatures for lands in Benafel's hand since Fog was at one life. On the next turn, Fog scooped.

Game 3
Benafel's first play, Nantuko Tracer, got Lava Darted. A Nullmage Advocate got Syncopated, and Fog Petravarked Benafel's forest. Déjà vu? Benafel played an Advocate, and Fog played a Chainflinger. A freshly cast Barkripper traded for Chainflinger and the hasty Pardic Firecat got through for two. Benafel played a Springing Tiger, and it traded for a Petravark and a flashbacked Dart. Fog attempted to stabilize with Ghostly Wings on the Firecat, along with Pyromania. The flying cat eventually traded with Soul Scourge and the Ironshell Beetle token. Benafel then swung with the Advocate, a Vivified land, and Ironshell. Fog drew nothing and packs his cards wondering if the game would have been different if he didn't trade his Chainflinger for a Barkripper early in the game.