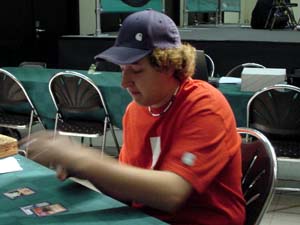 both these players ran the tables to be two of four players to end the day with perfect 8-0 records. Vasilis Fatouros of Greece and Wenzel Krautmann of Germany both have Pro Tour experience. For this tournament they are both running Goblins so expect a quick, brutal match.

Fatouros went first and found his skullclamp first, feeding to it a Sledder and drawing into a Sharpshooter. The Sharpshooter didn't stay around long as Krautmann shocked it and then attacked with a Piledriver and Prospector. The usual carnage in the little red men mirror matches continued as a cycled Incinerator wiped out the Piledriver.

Krautmann didn't have a fourth land but yet another Sharpshooter meant Fatouros would need to draw 3 bolts just to start casting creatures.

"I don't win this one," Fatouros said, scooping.

The second game was the usual massacre of early guys. Fatouros's Prospector fell to an Incinerator and Krautmann's Warchief was Bolted off the board. 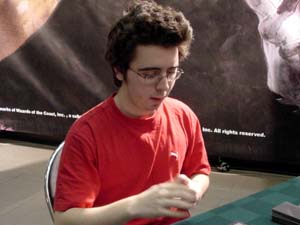 Unfortunately for the Greek player his deck seemed to have woken up on the wrong side of the bed this morning. After the flood of the first game he was now caught in a drought that saw him stuck on two nexi and a Mountain. Krautmann took full advantage as a Siege-Gang Commander followed out a Sparksmith.

Fatouros took out the Commander with another Bolt only for Krautmann to make another and start clamping through the little guys.

A second Commander and an avalanche of flying goblins put Fatouros out of his misery. Afterwards he showed a hand of triple Warchief and double Siege-Gang Commander he'd been unable to cast.