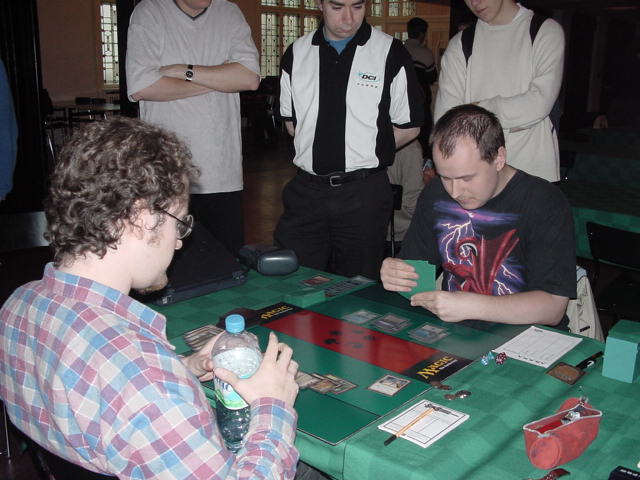 Wolfgang Eder and Peer Kröger are both accomplished German players. Both have previous GP Top 8's and both have been on the National Team. Both safely drew into day two yesterday and are now looking to get a good start to begin Day 2 with.

Eder is running blue-black Upheaval/Infestation and has a tricky matchup against Kröger's white/green beatdown deck.

Kröger took a risk on a two plains hand with a mongrel in hand. He found a green source but only after Eder had got a Standstill on the table. The Standstill was broken as a Wild Mongrel entered play. Eder soon dealt with that with a Chainer's Edict. Kröger summoned a second Mongrel and gave it a Spurnmage Advocate for company.

A Battle Screech the next turn could potentially have been very dangerous for Eder as with the help of the Advocate Kröger would have been able to generate 4 bird tokens. A Logic ended that idea only for Kröger to play a second Screech the following turn.

Eder calmly wished for a Psychotic Haze and then completed the destruction of Kröger's board with a Chainer's Edict to remove the Mongrel. The next couple of turns the Edicts in Eder's graveyard traded for a couple of Kröger's Glory's. A third Glory stayed in play and was enhanced with an Elephant Guide but Eder had bought enough time to set up. His deck went off and a big Upheaval followed by Zombie Infestation ended the game very quickly. 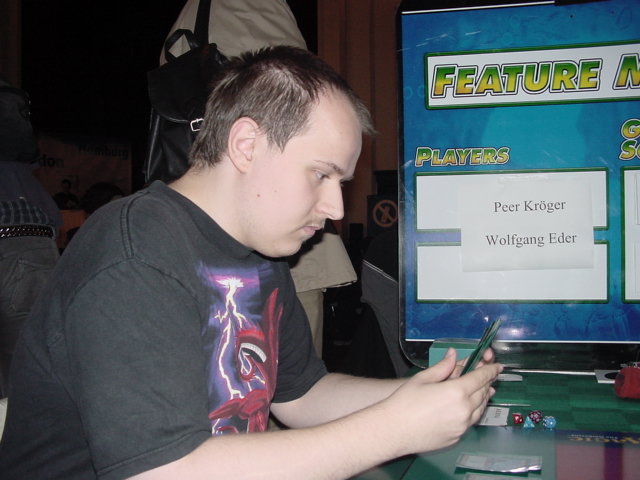 Kröger started strongly with Suntail Hawk and Spurnmage Advocate on turn two and then a Divine Sacrament on turn three. Unfortunately turn 4 didn't give him the fourth land for his Battle Screech and he lost a little tempo while Eder picked off his team with Blood and Edicts.

Eder caught up from a mulligan with a couple of Deep Analysis and then started attacking back with a Psychatog. Kröger had one bird token remaining and boosted that with Elephant Guide to take chunks out of Eder's life total.

Eder reached 7 land and the two Edicts in the graveyard started to come into play. A Mongrel as Edict bait never arrived because of Circular Logic. It still left Kröger with an Elephant. A second Guide on that and the Tog was chumping.

Upheaval was an expensive way to deal with the Elephant token but kept Eder in the game.

Kröger couldn't really take advantage of the restart. He got a Sacrament into play, but his Squirrel Nest was countered and Eder steadily built up his hand with another Deep Analysis.

A Battle Screech came into play with a Tireless Tribe for support although Kröger strangely chose not to flash back the Screech. Blood plus Ghastly Demise dealt with two of the birds. Kröger's deck still kept up the pressure. Guide on the Tribe forced Eder to pitch two cards to chump and Flashing back Edict still left Kröger with an Elephant token. Another Guide appeared to boost that and cost Eder more cards from hand. He was forced to flash back a painful Deep Analysis to find answers.

Kröger turned the screw, an Anurid Brushhopper bounced onto the board. Eder was running out of cards. Aether Burst dealt with the Elephant problem and another Aether Burst off the top delayed things a little. But Kröger replayed the Brushhopper and gave it a Mongrel for company.

Eder's next card was not Upheaval so it was time for a decider. 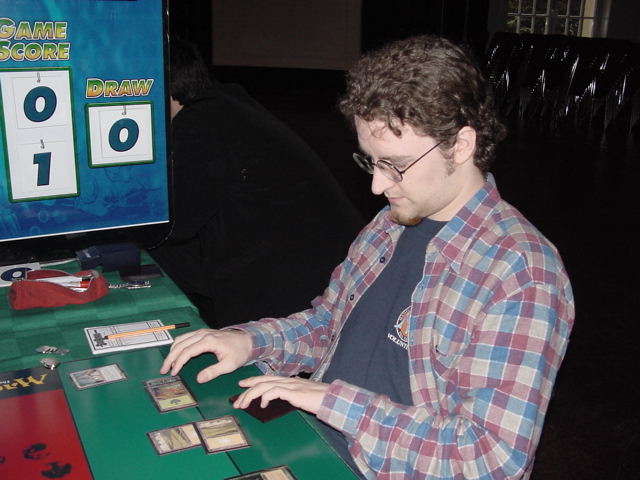 Kröger started game 3 with a couple of weenies, Spurnmage Advocate and Suntail Hawk. No land on turns 3 and 4 so Kröger could only make another Hawk and a Tireless Tribe.

Eder started racing with a 'Tog and then countering the Tribe by madnessing a Logic through an Infestation.

Kröger finally found a third land for his Elephant Guide only for Eder to send the Hawk back with an Aether Burst. Anurid Brushhopper at least gave Eder's 'Tog and Zombie token second thoughts about attacking. A fourth land gave Kröger Battle Screech and it looked like he might seize the initiative. Eder wished for the Psychotic Haze only for Kröger to prevent the damage with Prismatic Strands.

Time was called and it was a race for Kröger and his birds to do enough damage in extra turns. A second Screech put a lot more birds onto the table. An Upheaval in extra turns is always enough to secure a draw though and Eder took that option.