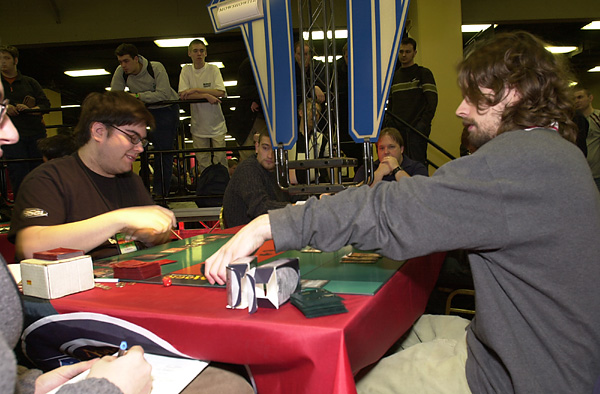 Mowshowitz, of team Kobra Kai, is running a well-tuned Fires of Yavimaya deck including the rarely-seen-in-constructed, Two-Headed Dragon. Ronaldson, of team European Alliance, is running a blue-white Rebels variant with both Rishadan Port and Dust Bowl.

Mowshowitz won the flip and chooses to play. The first game started quickly for Zvi, as early on he cast a Llanowar Elf, Assaulted a Defiant Falcon and cast a Fires of Yavimaya. Meanwhile, he had two Rishadan Ports in play denying Ronaldson early mana. On turn 4, Ben calmly cast a Defiant Vanguard. This would be Ben's last play of the game.

What I've given you here is important information. I've told you that Ben Ronaldson will not play another card from his hand for the rest of the game. But this doesn't necessarily doom him. This is the strange and powerful nature of the Rebel chain. Ideally, in Ronaldson's case, the Defiant Vanguard would live, then search for a Lin Sivvi. And Lin Sivvi would continue from there.

But unfortunately (for Ben, of course) that's not what happened. While Ben held a hand full of land, Zvi held an Assault and a Saproling Burst. Zvi killed off the Defiant Vanguard, cast the Saproling Burst, and "went to town." Truthfully, I'm not sure what going to town has to do with anything, but Magic: the Gathering slang is what it is. What "went to town" implies here is that Zvi removed three counters from the Saproling Burst, creating 3 4/4 creatures, and attacked Ronaldson for 12. Ronaldson took his 12, drew his last card, exposed the 9th land (he only drew two spells), and both players prepared for Game 2. 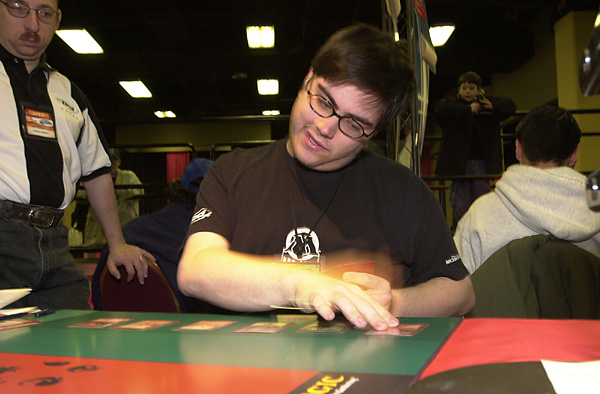 Zvi sideboarded in some very good anti-Rebel spells: Flashfires, Earthquake and Reverent Silence. From what I could tell, Ronaldson brought in Mageta, the Lion and Meekstone - two solid, if not interesting, selections for the matchup. Ronaldson played a Port, and looked frustrated as Mowshowitz played Llanowar Elves on turn 1 and 2. Ben continued to lay lands for a few turns, and Mowshowitz cautiously played Blastoderm on turn 3. He knew what was to come, but was powerless to do anything about it. Ronaldson tapped four mana as Zvi mouthed the words "Wrath of God." Later on in the game, Zvi questioned his own play, but concluded that in the matchup, he really didn't have a choice. His lack of choice gave Ronaldson a significant advantage, and in the later turns, Ronaldson summoned a Lin Sivvi that provided Ben with even more card advantage... Eventually, Zvi forced Ben to Wrath away a healthy board of Jade Leech and Blastoderm, but Ben had Lin Sivvi (and 6 more cards in hand) to follow up the Wrath. In the next few turns, Zvi would cast Two-Headed Dragon and Blastoderm, knocking Ronaldson to 4 life before he could stabilize the board with a mass of Rebels. From this position, Zvi couldn't topdeck an Earthquake in time, and Ronaldson swarmed Zvi for the kill.

Zvi started out the final game with Birds of Paradise, a Rishadan Port and a Fires of Yavimaya. Ronaldson countered with Meekstone, a Defiant Falcon and a Seal of Cleansing. The Seal removed the Fires, and Zvi countered with a second Fires and two more Ports. Ronaldson searched out a Lin Sivvi and took his next few turns to search out two more Defiant Falcons and a Defiant Vanguard. The Rebels began to whittle away at Zvi's life total, and Zvi played out his Two-Headed Dragon in defense, along with a Jade Leech and another Birds of Paradise. 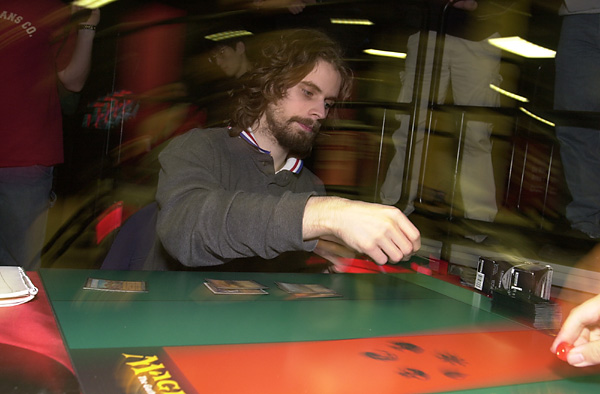 The next play was a devastating one: Parallax Wave. At this point, the game looked grim for Zvi. Ronaldson used the Wave to remove Two-Headed Dragon and Jade Leech from play, and attacked knocking Mowshowitz to 14. Zvi had to make a decision - and he did. In an attempt to get Ronaldson to remove counters from his Parallax Wave, Zvi played out an Earthquake from his hand, threatening to deal 8 damage to Lin Sivvi, Defiant Vanguard, as well as both players. Ben let this resolve, and opted to let his non-flying Rebels die, as the potential game-winning creatures - 3 Defiant Falcons - appeared to be more than capable of going the distance.

Eventually, we found ourselves at Zvi's untap step, and the board appeared as so: A Parallax Wave locking out a Two-Headed Dragon, a Jade Leech, and a newly phased out Birds of Paradise, with no counters on it. Ronaldson had out 3 Defiant Falcons, a Ramosian Sergeant, and a Defiant Vanguard. Ben was at 9 life. Zvi at 1. What could Zvi draw to save him?

Saproling Burst. Zvi cast his Burst, leaving Ronaldson flustered... Ronaldson untapped, placed his Parallax Wave into the graveyard, and stared at the board as he had his three fliers on board - Zvi, only two.

After considering his position for a few minutes, Ronaldson decided to go for it - he attacked with his 3 Defiant Falcons and hoped that one would make it through for the final point of damage.

Zvi blocked one flier with his Birds of Paradise, and two with his Two-Headed Dragon. Ronaldson conceded.

This has been an odd Pro Tour, to say the least. Not only are players playing with Dragons in their decks - there's controversy as to which is best: Two-Headed Dragon or Rith, the Awakener? Zvi makes a good case for his selection.