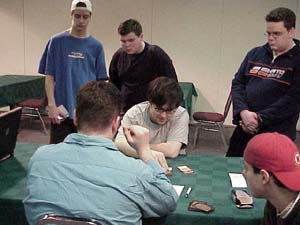 This match might as well have taken place at the Thursday Night Draft at Neutral Ground NY four years ago., since that's when both of these players began to compete in earnest, eventually fighting their way into the spotlight.

Zvi Mowshowitz drafted a mediocre G/W/u deck as the draft did not work out for him very well. OMS has many juicy B/R/U cards, but despite having an advantage in card quality, the matchup is not obvious. Zvi's deck is much faster, and might be able to overrun Dan before he can take advantage of those power cards.

Zvi won the die roll and opened with one of his two Elfhame Palaces (his cards may be sub-par at times, but his mana is very tight). Zvi played a turn two Nomadic Elf. Dan OMS cast a Hypnotic Cloud without kicker, getting rid of the other Elfhame Palace.

Disciple of Kangee joined the team on Zvi's side of the table, while Dan topdecked and cast Vodalian Zombie. Protection from green could play an important role in this match-up.

Zvi attacked, and Dan blocked. Zvi used a Disciple of Kangee to make his Elf blue and allow the two creatures to trade in combat. On his turn, Dan cast Bog Down, getting rid of the remaining cards in Zvi's hand. Things looked grim for PT Tokyo champ, as Dan still had five cards in hand.

Dan proceeded to Agonizing Demise the Kavu Climber Zvi drew, and, once he got to six mana, cast a 5/6 Zanam Djinn. Zvi, who currently had an Elvish Champion, Might Weaver, Disciple of Kangee and a Utopia Tree in play, had his offense shut down. He cast another Nomadic Elf and passed the turn.

Dan attacked with a Djinn, then sacrificed his Sulfur Vent to cast a Shivan Emissary, killing the Disciple, and Recoiled an Elf Lord. The race was on, and Dan was winning it.

Zvi gated a Utopia Tree to cast Steel Leaf Paladin. Dan cast another creature, pointing out that Zvi could not really win the race. Zvi looked at his next card, and agreed by conceding game one.

Zvi played first in the second game, but failed to draw one of his many two-drops. The first creature to enter play was a Disciple of Kangee. Dan cast a Sparring Golem and was willing to trade it in combat, but Zvi was ready with a Gaea's Might. He also cast a Sunscape Apprentice, making his creatures (or lack thereof) more difficult to block.

Dan had an answer for that, too, removing it with Cursed Flesh and casting a Tower Drake. The Drake met an untimely demise at the hands of Sunscape Battlemage, and the fearless Disciple pressed on, still being the only "beatdown" on Zvi's side of the table.

Bog Down took away the rest of Zvi's hand. Ravenous Rats took out the land he drew but did not play on the following turn, allowing Dan to remove the Battlemage via Recoil.

Dan cast a Phyrexian Slayer, but it was Zvi's turn to gain some card economy, as he peeled a Hobble off the top of his library. Dan used his Nightscape Battlemage to bounce the Disciple rather than wait for Zvi to draw a second creature. Zvi replayed the Disciple and cast the Nomadic Elf he just drew.

Two Vodalian Zombies entered play, shutting down Zvi's offense entirely - or not! Zvi used the Disciples ability to send the Nomadic Elf to the skies, bringing Dan's life total down to eight. 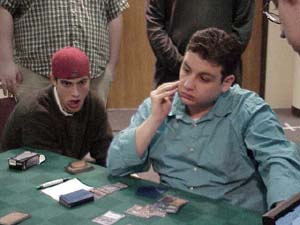 Zvi was able to gain further card economy by pretending to trade his Elf and Might Weaver in combat with Rat and Battlemage, but saving his creatures with Pollen Remedy. He summoned a Serpentine Kavu and a Voice of All, making an amazing comeback despite losing so many cards to Dan's tricks early in the game.

Zvi had to take a mulligan in the third game. He was able to drop a Thornscape Familiar on turn 2, but Dan already had a Nightscape Familiar in play. He could have used it to cast a turn 3 Marsh Crocodile, but chose to Cursed Flesh Zvi's familiar and play a Vodalian Zombie instead.

Zvi used a Hobble to stop the Vodalian Zombie, but that only provided a juicy target for Dan to gate the Crocodile with. Zvi's best available play was to summon a Utopia Tree, whereas Dan brought out not one, but two Vodalian Zombies. Although Zvi's deck is usually much faster, in this game it was Dan's time to turn all his creatures sideways.

Zvi managed to almost-stabilize thanks to Disciple of Kangee. Few people remember that this creature turns the would-be flyers it targets blue, but this secondary ability had been very important in this match.

Dan's army got slaughtered in the following attack due to Pollen Remedy, but it mattered little. He was able to summon a Zanam Djinn on his turn. Although Zvi could chump-block a few times by giving his creatures flying, the situation was still quite grim for him. When Dan attacked with the Djinn on the following turn, Zvi had an answer once again. He gave Kavu Climber flying and cast Gaea's Might on it, taking out the scary flier. Dan was down but not out, casting Faerie Squadron with kicker to keep up the pressure.

Zvi kept peeling off the top of his library. His latest draw was Voice of All, which got protection from blue. Dan summoned yet another flier, a Phyrexian Slayer. The top-decking continued. Sunscape Battlemage was the next card Zvi cast, taking out the Squadron.

Dan finally drew an answer to the Disciple of Kangee. He cast Shivan Emissary with kicker to remove it. Zvi bought another turn by giving one of his green monsters flying, but the Phyrexian Slayer was beginning to look scary. Yet another top-deck - a Steel-Leaf Paladin which bounced the Battlemage. However, Dan had an answer in hand this time. A Phyrexian Rat was in his hand, but he chose to cast a Sleeper's Robe first. The Robe yielded nothing interesting, but allowed Dan to get an extra point of damage through with a Shivan Emissary. He then cast a Rat, taking out the Sunscape Battlemage.

Zvi failed to top-deck for the fifth time in a row, and conceded the match.