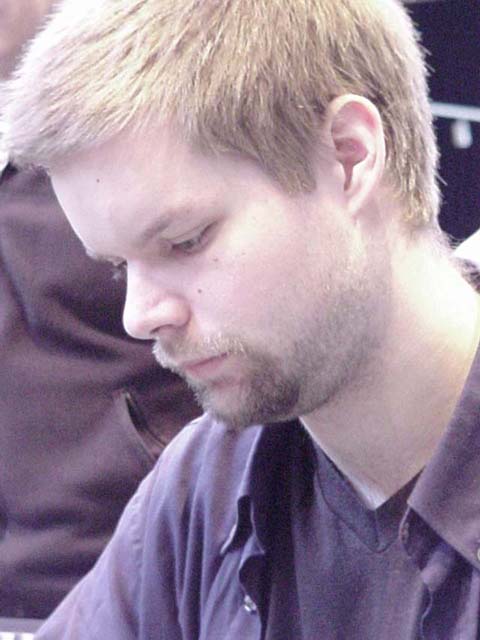 Zvi had an explosive r/g splash black deck with a bunch of 2/2s and some black removal. This was facing a g/w splash blue deck with some cards that could be reasonably nasty in this match-up like Lashknife Barrier and Hobble.

Jakob won the toss and elected to play first, but couldn't drop a creature until turn 4 which was a Quirion Elf, but a turn 3 Lashknife Barrier was a reasonably powerful play against the beatdown deck. Meanwhile Zvi had made a Yavimaya Barbarian and an Amphibious Kavu. Mowshowitz's fouth turn was intresting though as he chose to Scorching Lave the Quirion Elf before attacking, which was duly pumped with a Gerard's Command, so the creatures could not attack.

Had Zvi attacked first, he could have cast Scorching Lava in response to the pump and would have been in a better situation for sure, but there were reasons not to do so. If his opponent had had Pollen Remedy and a Gaea's Might then things might have been worse.

Despite this setback Zvi made a Nomadic Elf in the same turn and passed. A Kavu Climber then hit the board on Jakob's side, but it was Spite/Maliced straight away, leaving an opening for Zvi to serve for 6, reducing the Dane to 12.

WHAM! Molimo hit the board, but Zvi had technology: Maniacal Rage - on Molimo! With the Elf tapped to help make Molimo Zvi had free reign to swing in for 6 again and make a Might Weaver. The next turn would soon put a stop to Zvi's thought's of victory though as first the Amphibious Kavu was Hobbled, then a Qurion Sentinel and a Benalish Lancer all came to the field of battle in the same turn. Molimo then swung in for 8. Disgusted, Mowshowitz could only hope his opponent would not block as he made an Alpha strike. Jakob chose to block.

In quite a scary fashion Zvi bust out a turn one Apprentice followed by a Sinister Strength and managed to attack twice before Steinaa made a Quirion Sentinel and a Lashknife Barrier. Choosing not to trade with the Sentinel on his fourth turn, Zvi instead sent a Kavu Runner (haste) through for another 3 putting Jakob on 9. 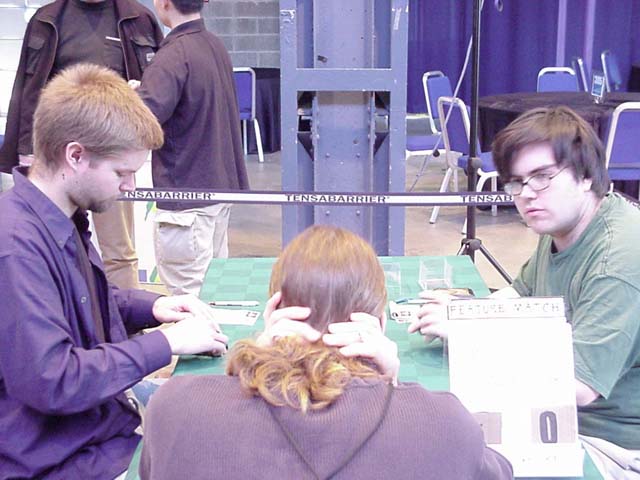 Feeling like he might have stabilised somewhat Jakob then made an Amphibous Kavu, but it also received a Maniacal Rage (disenabling it from blocking) and the Mowshowitz cast Savage Offensive! This made his Apprentice a first striking 5/3 and his Kavu Runner a first striking 4/4! For some reason Steinaa cast Gerard's Command on his Quirion Elf, but it died to the first strike damage.

A Hobble on the Apprentice was not enough to stop the Kavu Runner delivering the final blow with a Gaea's might.

Steinaa thought about it for a while, but decided to play first in the end. Mowshowitz had to mulligan, but his six card hand was nuts: 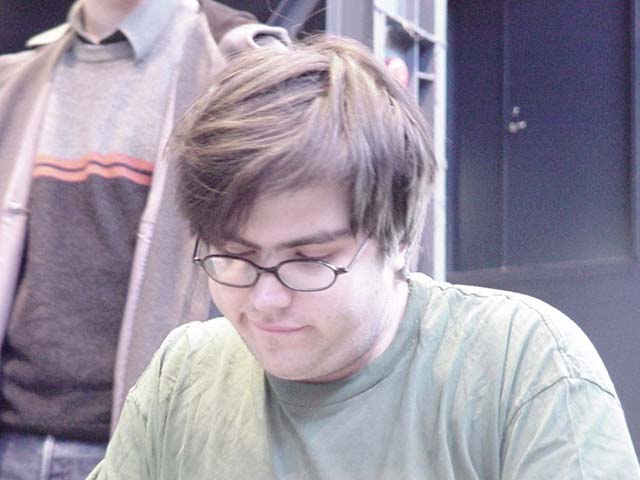 Having cast Harrow on turn 3 after the Specter had taken an island out of his hand, Jakob then managed to Hobble the Specter. Zvi then cast a Grappler and served for 3 more putting his opponent on 11. The Familiar then traded with a Kavu Climber (it was pumpe with the Apprentice) and the Grappler dealt another 3.

Jakob then made a Benalish Emissiary, killing Zvi's only source of black mana (Zvi had a Spite/Malice in hand) and it then chumped a Grappler that was pumped with the Apprentice. Things started getting nasty for the American then as a kickered Benalish Lancer came to town, attacked then was swapped with a Steel Leaf Paladin. For the third consecutive game Zvi draws his Maniacal Rage and puts it on his opponent's creature - the Paladin in this case and serves unblocked for 4 putting the life totals at 4 - 16. Incredibly Steinaa then throws the game! Zvi had nothing he could cast in hand and Jakob had the Benalish Lancer, but instead of casting it he chose to attack with the Raged Steal Leaf Paladin then cast Explosive Growth with kicker! This only reduced Zvi to 5! Zvi then counter-attacked for the win. I can only assume that Jakob had the life totals confused in his own head and thought that the Explosive Growth would win the game.