Round 9: Frederico Bastos vs. Jan Doise 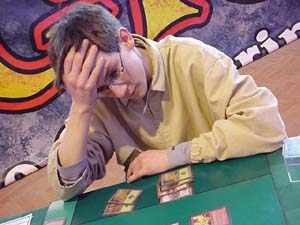 Frederico Bastos is probably the most recognised Portuguese player with Pro Tour Top 8's in Tokyo and San Diego. Jan Doise is one of the top Belgian players with consistent performances at Grand Prix level.

Both weren't entirely happy with their drafts as they got dragged into the same three colour combination – green-red-blue.

Doise went first. Both players made Krosan Avenger on turn 3. Bastos burnt Doise's with Flame Burst only for Doise to summon another one. Doise then followed it with a Leaf Dancer and they started to race.

Bastos missed making a monster for a turn but then summoned an Ember Beast. Doise tried to press home this slight advantage by giving his Avenger flying with Ghostly Wings and then summoning a Werebear.

Bastos used Rites of Spring to find his Island, paying the madness cost of Fiery Temper to deal with the flying Avenger. He attacked with Avenger and Beast. The Avenger fell to the Werebear but Bastos had a Thought Eater to keep the Beast attacking.

A thermal blast from Bastos cleared out Doise's blocker and he came in for the win on the next turn.

Doise again started with an Avenger on turn. Bastos didn't burn it this time and Doise followed up with Aven Fisher.

Frederico cast Acorn Harvest to try and deal with the Avenger only for Jan to Refresh it when a Squirrel tried to take it down. Frederico tried to fight back, summoning a Hell-Bent Raider and then a Thought Eater. But Jan found a haste creature of his own and a Pardic Firecat joined the other two creatures to knock Bastos down to seven life and leave the Portuguese player firmly on the back foot.

After some deliberation Bastos attacked with the Thought Eater and flashed back the Acorn Harvest. Doise attacked with just the Fisher to leave Bastos on two life and then summoned a second Fisher.

The Portuguese could pull it back though as he had two Temporary Insanity and Overrun in hand. Unfortunately the only way he could get three cards in the graveyard was through the Hell-Bent Raider. Random discard lost him one of the Insanity's and crucially the Overrun.

The second Insanity took down both Fishers but unfortunately Doise used Careful Study to give himself Threshold and added an Otarian Juggernaut to a much improved Werebear to roll over Bastos in quick fashion. 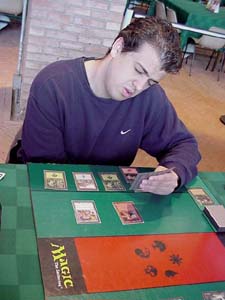 Bastos made Doise go first for the decider. Bastos got the first creature in as the dreaded Wild Mongrel hit the table on turn 2. Doise made a Krosan Avenger on turn 3 for the third time in the match.

To clean up his mana, Frederico replaced two Forests and a Krosan Restorer with an Island, Forest and Mountain through Rites of Spring and then added Nimble Mongoose to the table.

Doise summoned a Cephalid Looter and Bastos chose to still bide his time, holding back the Mongrel and bringing in an Ember Beast. Doise summoned a Rabid Elephant and started swinging while Bastos got up to five mana and was able to Thermal Blast the Looter.

A not so impressive Otarian Juggernaut entered play again on Doise's side while Bastos made his own Rabid Elephant.

Ahead in the damage race, Jan gave the Juggernaut flying with Ghostly Wings to knock another six points off Frederico's life total and leave him at eight.

Bastos hit for three with his own Elephant and then was forced into a decision. His life was so low that he needed chumps to throw in front of the Elephant. Nimble Mongoose was first to be stomped on. He couldn't stop the flying Juggernaut though and the situation went terminal when Doise added a Skywing Aven to the airforce.

Bastos desperately needed Overrun, or Temporary Insanity. He drew neither and, as Doise showed him after the match, Overrun wouldn't even have saved him as the Belgian was holding Moment's Peace.