Round 9: Full of Hot Air

think it's important to make one thing absolutely clear: The rumors that reigning Player of the Year Josh Utter-Leyton is a robot designed by MIT to acquire Pro Points are false. I'm not saying I don't understand where these people are coming from. You look at a player whose end-of-year ranks for the last three seasons go ninth, seventh, and first, and you start to wonder. Still, you have to look at the facts. Though he plays with precision, focus, and an economy of movement, away from the battlefield he has been seen smiling and laughing on multiple occasions.

This round he faced off against Dmitri Butakov, one of the few Magic Online masters who can legitimately call themselves "grinders." Even among his fellow Magic Online Championship Series competitors, he stood out for his dedication and success. Though he's the lone unknown quantity in a room full of Pro Tour regulars, he has acquitted himself well so far, shaking off a disappointing 0-3 start in Modern Masters draft to climb to 4-4.

For this draft, Utter-Leyton had put together a very spicy mono-blue deck featuring a full suite of fliers as well as a number of tricks backed by card advantage large (like Opportunity) and small (like Divination). Butakov was black-white, with a focus on early creatures topped by the mighty Shadowborn Demon. He only had four spells, but they were all removal. On paper, it looked like Utter-Leyton had the advantage. His fliers would be hard for Butakov's early creatures to get past, and two Cancel, Claustrophobia, and Sensory Deprivation seemed like enough to handle the Demon. 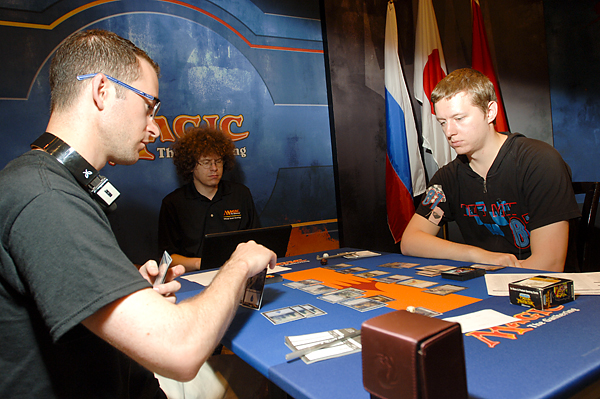 Dmitri Butakov rattled off some wins after starting the tournament 0-3. This round, he found himself 4-4 and playing against 2012-2013 Player of the Year Josh Utter-Leyton to see who would break 50% wins.

In Game 1, Butakov's draw was a little clunky with just a couple small attackers and an Angelic Wall. Utter-Leyton kept them home with Seacoast Drake, and after Butakov used Pacifism on Water Servant he tapped out for Air Servant. Butakov shrunk it to a 3/2 with an anemic Quag Sickness, but it was still free to tap Angelic Wall. Utter-Leyton solidified his defenses with Armored Cancrix. It was quite a tfew turns before Butakov found his second swamp for Deathgaze Cockatrice, and that gave Utter-Leyton enough time to get his Ratchet Bomb to three counters. He destroyed the Sickness and the Blood Bairn, then played out his hand and tapping down to just one mana open.

Butakov seized the opportunity and summoned Shadowborn Demon, destroying the Air Servant once and for all. Between that, the Cockatrice and the Angelic Wall, Utter-Leyton was held back. He dropped Sensory Deprivation on the Demon, and Butakov sacrificed it on his next turn. They were at a stalemate and Butakov's low life total was very slowly climbing thanks to Soulmender. Utter-Leyton found a Time Ebb and sent the Cockatrice back to Butakov's deck. Cancel took care of it on the way back down, and suddenly Utter-Leyton was getting through for damage. Butakov found nothing to stop the attacks, and soon scooped. 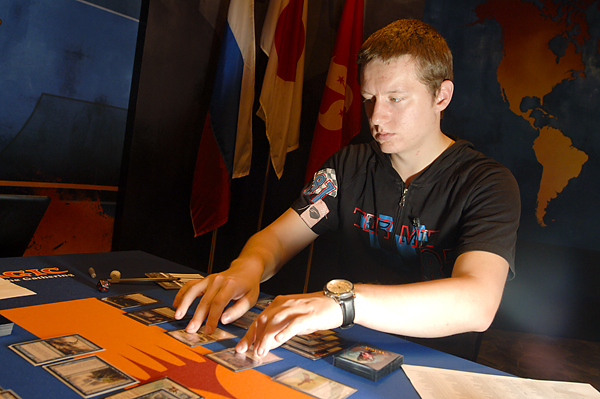 Butakov tries to find a way past his opponent's devastating flying creatures.

Butakov put Utter-Leyton on the play for Game 2. They both went down to six cards, but Utter-Leyton had the early advantage. He started with Seacoast Drake, then Warden of Evos Isle. Butakov had no play for his first three turns. Utter-Leyton knocked him to 16 and played a Trained Condor, and for a moment it looked like it would be a short game. Butakov played a fourth land and shut the door with Wall of Swords. They both played out some creatures, waiting to draw something that would open up the battlefield.

Just as he was getting low on cards, Utter-Leyton found Divination, then Canceled an attempted Pacifism. Archaeomancer got him back his Cancel, and despite his inability to get damage through, he was clearly in the driver's seat. Butakov was allowed Deathgaze Cockatrice. Utter-Leyton had the trump in hand: Air Servant. He even let Butakov play Auramancer to get back Pacifism, and then allowed the Pacifism too. After all, it was the Air Servant's ability that really mattered. 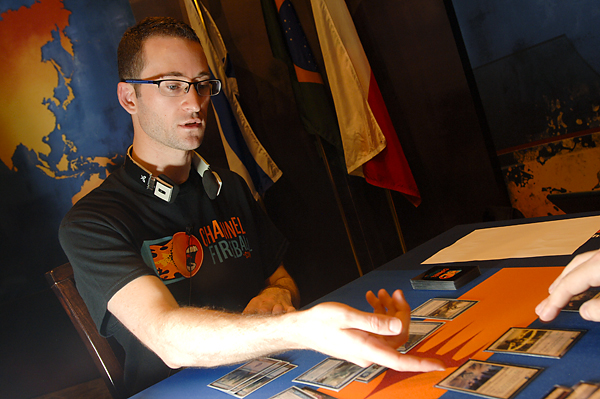 Utter-Leyton's Air Servant shows off just how much it can control a battlefield.

Utter-Leyton was on seven land, heading towards the magic number nine for three activations. Opportunity made sure he got there right on time. Still, Butakov wasn't out of threats, and when he went for Accursed Spirit, Utter-Leyton finally pulled the trigger on his Cancel. That opened the window a crack for Butakov. He played Quag Sickness on the Air Servant into Utter-Leyton's nine mana. Utter-Leyton tapped down three of Butakov's fliers, but the Servant was gone for good. Butakov even had a second Pacfisim for Water Servant. Utter-Leyton would get an attack through, but then the shields would be back in place. Would it be Utter-Leyton's undoing?

Of course not. Two turns after dropping Butakov to 9, he showed him Time Ebb and Frost Breath, pushing through the remaining damage.

I asked Utter-Leyton if he thought the matchup was as favorable for him as it seemed from the decklists. He grinned and said "When I saw his decklist I knew there was almost no way I could lose." To his mind, Butakov had so few creatures that could attack well against him that he would have more than enough time for his more powerful cards to take over. I also asked him about Canceling the Accursed Spirit, and if he was concerned about leaving his Air Servant vulnerable. "Not really. He was running out of ways to win. I felt that giving him 3 damage a turn was the only way I could lose. I might be wrong though."

Butakov didn't think the matchup was quite as lopsided as his opponent made it out. A win would rely on getting his best attackers out, but he felt that he had a good chance at this, and that the lifegain from his Soulmenders would prevent Utter-Leyton from punching through for enough damage. "I didn't expect to face such defensive decks. All three rounds I have chosen to draw. I only wish I had a Millstone for this match."