Round 9: Gabor Papp vs. Nicolaï Herzog 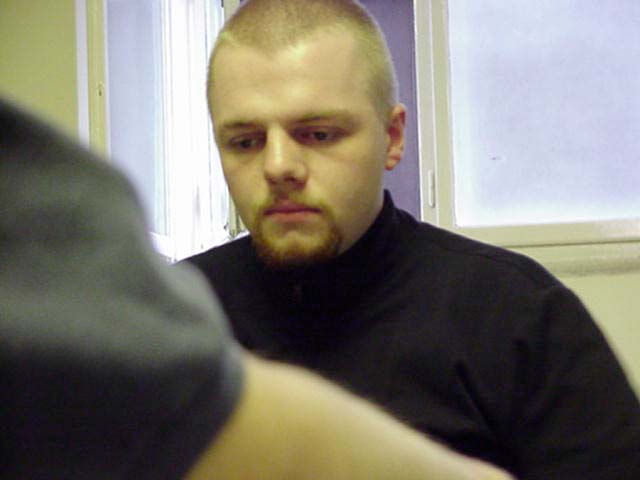 Nicolaï chose to go first, although his deck is quite defensive. He played an Auramancer on his third turn, and Papp had a Tainted Pact in Nicolaï's end step. He ignored the Moment's Peace, but when he turned over a Diligent Farmhand second he had to take it. Because he was playing three of them, to keep going would risk revealing a second Farmhand and so getting nothing.

Herzog attacked with the Auramancer, which was blocked by Papp's Farmhand. Herzog's deck is very light on creatures so it was little surprise that he didn't have another play. Gabor used the Farmhand to fetch a land, and played a Krosan Avenger on his next turn.

Nicolaï attacked and played Aven Windreader, which Papp had little way of dealing with, although he does have two Krosan Archers in his deck. The Hungarian was also land heavy, and discarded three Forests to cast Last Rites. This left Herzog with an empty hand, but he was still certainly the aggressor, with his Windreader and Auramancer still attacking.

Papp was still drawing a lot of land, and had no way of dealing with Nicolaï's flyer. The Windreader brought Gabor down to seven, and he decided to launch an all-out attack. Papp survived but went down to four, and conceded once Nicolaï's used the Windreader's ability to reveal his next draw, a Diligent Farmhand. Papp needed to find a Krosan Archer or a Morbid Hunger. The Archer is only 2/3, but Gabor has enough combat tricks to give a fighting chance against a 3/3 flyer.

The Hungarian's early Crypt Creeper was removed by a Flame Burst. Herzog summoned an Auramancer, once again without an enchantment to fetch back. He Firebolted Papp's Nantuko Disciple, and attacked with the Wizard.

Gabor summoned a Farmhand and used it to fetch the second Swamp he needed for Sadistic Hypnotist, but Herzog had a Scrivener to return Flame Burst to his hand and made it less of a threat.

Papp played a Cursed Monstrosity, which was equally easy for Herzog to deal with, but assuming that Papp had a land in his hand, he held off. The Monstrosity attacked, which left Herzog with a difficult decision for his turn. First he played a Pardic Firecat but then he had to decide what to attack with, since Papp had the mana open for Elephant Ambush.

Attacking was really the only sensible thing to do, and Papp did have the Ambush, killing off Auramancer. Now Papp clearly had the upper hand, as he had a Monstrosity and an Elephant token to Nicolaï's Firecat and Scrivener. He also had Last Rites in hand, which would deal with Herzog's Flame Burst in hand now that the Norwegian had tapped out.

Instead he cast Nantuko Disciple, figuring that he would be able to ride the Elephant token to victory. Herzog used two Flame Bursts to kill the Disciple and the flyer, leaving just the token in play for Papp. Now Gabor did decide to use the Rites, and Nicolaï winced as he was forced to discard the Mystic Zealot he had just drawn, as well as a Syncopate. Two turns later the game was Papp's, as Herzog didn't draw anything to deal with the Elephant.

Herzog seemed to be annoyed to lose a game to Last Rites, a card he obviously considered sub-par, although there seemed to be no consensus between the players and spectators, some people thought it was bad, and some thought it was quite good. At least it gives you something to do with spare land in hand and helps you to gain Threshold. 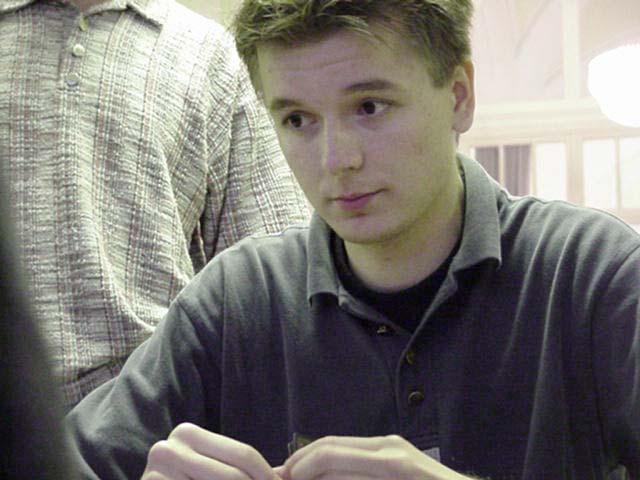 Unlike the first game, Nicolaï let Gabor go first here. This seemed like a sensible thing to do since Gabor's deck was not particularly fast and Herzog had a lot of reactive cards in any case.

Once gain Gabor had an early Diligent Farmhand, and Nicolaï had nothing on his first four turns The Farmhand attacked once before it was sacrificed, and Papp played a Crypt Creeper. Once gain Nicolaï did nothing except Syncopate an Elephant Ambush.

Papp's Crypt Creeper appeared to be no match for Nicolaï's sixth turn Aven Windreader, although of course Nicolaï did not block the Creeper with it because of Muscle Burst. Papp had a Last Rites, but he played it overly-cautiously, by only discarding two cards. Strangely he also chose not to discard his Basilisk, although he was still two mana short of its bloated casting cost.

This was shown to be a mistake as Nicolaï showed a hand full of spells. The Rites got rid of Second Thoughts and Persuasion, but Nicolaï still had two Auramancers and a Shelter. When he played Auramancer Papp was forced to sacrifice his Crypt Creeper to remove the Persuasion from the game. Nevertheless, when Herzog played the second Auramancer as well he had an overwhelming board position, and the creatureless Papp conceded on his next turn.