Round 9: Gabriel Nassif vs. David Price

Deadguy David Price is smiling just a little wider this afternoon. He's 2-0 on the day so far, and is getting to smash with giant monsters. Nassif is also 2-0, and apparently apprenticing at his school. These two bought beatdown decks at opposite extremes. Nassif got the "good" one, mono-red "R", but it cost him a starting hand of six cards and a starting life total of just nine. Price got the "bad" one, the "J" deck that really needs to draw its heavy-hitting Jade Leeches and Jeskas. However he starts at a healthy seven cards and twenty life. 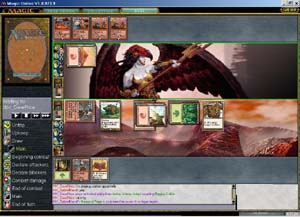 (click to open full-size in a new window)
Nassif got a pretty good start of Raging Goblin, Goblin Raider and Reckless Charge, but he was stuck at two land. Price had Jailer ready to trade with the Raider, and then answered brand Ranger with Jeska, Warrior Adept. Things were not going well for Nassif.

He made an ambitious play of busting out Maniacal Rage, hoping Price would forget the cards in front of him. He did not.

Without a third land he couldn't stand against Price's tide of creatures. It was soon over.

Price had to mulligan in the second game, earning a cheer from Nassif. His next hand wasn't that great either, made that much worse by Nassif's opener of Rage Weaver and Maniacal Rage.

"Yeah, this is gonna be a problem." - Dave Price

Two more Weavers followed while Price suffered from Tome Overlaod. Otarian Juggernaut kept the pain to a minimum, but he was still at eight. Another assault put him at two, and facing a lethal assault. Jeska rose to the challenge of protecting him. 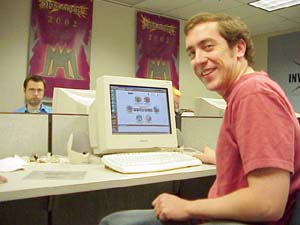 David PriceHe was already despondent. Nassif had a Barbarian Ring out, and to survive the attack Price would send three more cards to his graveyard, putting him one card off of threshold. If he had any spell he would win. Price gamely went through the motions, but accidentally activated his Jeska instead of blocking with it. Fortunately, Nassif had a spell in hand, so the error didn't matter.

Now it was Nassif's turn to mulligan. Price smelled blood as soon as Nassif failed to accept his hand immediately. He called for the mulligan. He got it. And then another.

Price's hand was gangbusters: Two forests, a mountain, Jeska and Jade Leech. If he could draw a land, the game was his. Nassif led with second-turn Raging Goblin, not auspicious. Price put it on ice with Juntu Stakes. He failed to draw land number four, but he got ready for the worst with Jalum Tome. 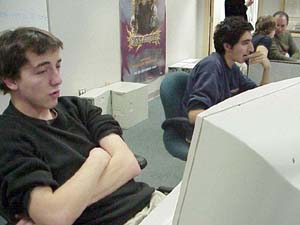 Gabriel Nassif (on the right)Well, it was the worst. He drew a non-land, then cycled into a non-land. His draw for the following turn: Not land.

Nassif was doing a good job of smashing, thanks to finding his second mountain. While Price floundered he'd played a two-power creature every turn. By the time Price finally found land number four, Nassif had brought him to three and was about to draw mountain to turn on his Urza's Rages.