Round 9: Gabriel Tsang vs. Dave Montreuil 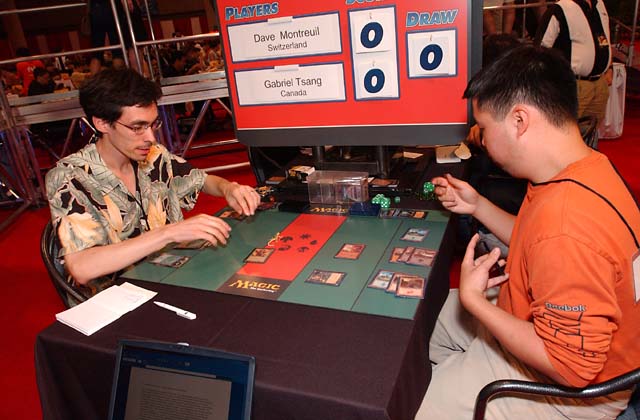 It's Canada versus Switzerland, though it is Switzerland by way of Canada, as Dave Montreuil has only been living there for the last five months... barely long enough at all to have qualified for Worlds by way of their National Championships. If there is any international strife here it is very well hidden, since last I checked Canada and Switzerland have not fought each other in any wars recently... and it doesn't appear that Dave has picked up too much Swiss pride in the intervening months since leaving Victoria for Switzerland. Nonetheless these two Canadian titans have never met before today, despite being high-caliber Canadian players for many years.

Gab was playing first, and started the game off with a Sulfur Vent. Dave played an island, and Gab played a basic swamp on his second turn. Dave's second land was a forest, and on Gab's third turn it was a mountain and Morgue Toad that were played. Dave cycled Aggressive Urge at end of turn, then played a forest and Gaea's Skyfolk. The Toad attacked, and Gab played Nightscape Familiar to finish his turn. Dave's Skyfolk attacked, and Dave played an Urborg Elf, making it a 2/2 and mana-accelerating 1/1 on both sides. Gab attacks with the Familiar and Toad, then played Kavu Glider. Dave's flying Bear counterattacked, and Dave played AEther Mutation on the Glider, getting three tokens. When Gab still hasn't played a third land, Dave remarks that he looks a little mana-shy over there, and when Gab attacks the tokens and Elf jump heartily in front of the Toad. Gab played an island and Hunting Drake, putting the Skyfolk back on top. Dave replayed the flying Bear and elected not to attack; Gab played a fifth land and attacked with the Drake, which traded with the Skyfolk. Gab then Recovered the Drake, and replayed his Kavu Glider.

Dave attacked with his tokens, and Gab takes two damage from them rather than blocking. Gab counterattacked with the two creatures, then used his resurrected Hunting Drake to destroy a token. Dave drew Fertile Ground, gaining access to his other colors, and used it to play Thornscape Battlemage with the red kicker, again killing the Hunting Drake. Dave's Saproling attacked for one, again. Gab then untapped his lands and attacked with a now-flying Kavu Glider, and Gab finished it up with a kicked Hypnotic Cloud. Dave topdecked a mountain with which he could have cast the three spells he just discarded... isn't it always the way? Dave played it and counterattacked, hoping for the best off the top of his deck. Gab attacked Dave with the Glider, leaving the Familiar back on the defensive, and Gab's second Hunting Drake demolished the other token creature remaining in play. With no purpose to it, Dave refrained from the attack, and passed the turn to Gab. Accepting his positional disadvantage and the near impossibility for him to climb back out of it, Dave conceded the first game to have more time for the rest of the match.

Dave elected to play first, thanks to his quick and aggressive deck design, and by the second turn Dave had an island and forest, plus Fertile Ground, to Gab's island and swamp. On his third turn Dave played a mountain and Jungle Barrier, which Gab answered with a mountain and Kavu Glider. Dave then played a forest and Quicksilver Dagger on the Barrier, making it say 'Draw a card' a few too many times, and then used Tribal Flames to eliminate Gab's Glider. Gab played a Morgue Toad on his fourth turn, and at the end of the turn Dave used the Barrier to draw a card, using it again on his next turn, then played a forest and Razorfin Hunter, then a Thornscape Battlemage with kicker to destroy the Morgue Toad. Having done enough that turn, Dave allowed Gab to enter his fifth turn. Gab played Quagmire Druid after playing another swamp, and Dave gleefully untapped his card-drawing army. Drawing another card and playing another land, Dave played a second Razorfin Hunter, then attacked with the Battlemage, who was blocked by the Druid. Dave brought more beats by playing Amphibious Kavu, since drawing twice as many cards as his opponent means he didn't even out of gas even when Gab uses Hypnotic Cloud to clear out the rest of his hand. Following the Cloud Dave played a Gaea's Skyfolk, and Gab conceded the game to insurmountable pressure from the Dagger.

With thirty-five minutes left on the clock thanks to their fairly interaction-low games, Gab resideboards in hope of forestalling a card-advantage-based nightmare, now that he has seen an Allied Strategies in Dave's deck on top of the Quicksilver Dagger and general Battlemage craziness. Gab elected to play first for the third game, and played a swamp, which Dave matched with a mountain. Gab played an island and was done, while the same was true for Dave save with a mountain instead. Gab played a swamp and Quagmire Druid, and Dave answered with an island and Hooded Kavu. Gab then played a third swamp and attacked with the Druid, a beating which Dave happily accepts. Gab played a Grave Defiler and looked for Zombies, but all he passed over were his Cloud, Probe, a Hunting Drake and another Swamp. Dave played a mountain and Strafed the Defiler, followed by a Tribal Flames on the Druid, demolishing both the Zombies with gouts of red damage. Hooded Kavu then brought the beats, and Gab's hand would have to do a little better to beat what Dave is saying he is capable of doing. Gab dropped yet another swamp and a Tower Drake, and Dave brought the attack with his Kavu, which the Drake elects not to block despite Dave not having activated its ability. Dave played an Amphibious Kavu, and was probably glad that the only Shoreline Raider was in Darwin Kastle's deck rather than Gab's. Gab used Recover to get back the Grave Defiler, and played a second island before attacking with his Tower Drake. Dave took the attack without worries, then attacked right back with his Kavu, following it up with an AEther Mutation on the Tower Drake, which was countered via Jaded Response. Gab cast the Defiler again, turning over a swamp, mountain, Marsh Crocodile, and getting to keep a Zombie Boa. After playing another swamp, Gab attacked with the Drake, checked the life totals to make sure his were accurate (they weren't), and passed the turn.

Dave attacked with his creatures blindly, and when the Hooded Kavu was blocked, he saved it using Aggressive Urge, getting two damage through with his Amphibious Kavu. Dave played another island and ended his turn. Gab attacked with his Zombie and Drake, then played more Zombie madness with the Nightscape Familiar and Zombie Boa. Amphibious Kavu attacked Gab without fear of the ramifications, and Dave considered his options. First came down the Ana Disciple, soon followed by Thornscape Battlemage with the red kicker, killing off Gab's Tower Drake. Gab used Zombie Boa's ability, naming Green, then attacked with both Grave Defiler and Zombie Boa, knocking Dave down to just five life. Morgue Toad joined the fray on Gab's turn, and Dave then played Jungle Barrier, drawing a card. Dave then attacked with his Hooded Kavu, Thornscape Battlemage, and Amphibious Kavu, and Gab blocked the Hooded Kavu with Morgue Toad, and the Battlemage with Nightscape Familiar. Damage went on the stack and Gab regenerated his Familiar, going to just six life, and Dave passed the turn. Gab attacked with Zombie Boa after naming Green again, and Dave doesn't block, but he does use the Disciples' ability to reduce the damage by two, though the Fertile Ground forced him to mana burn for a second point of damage. Dave then gave Thornscape Battlemage flying and attacked past the two regenerating Zombies, and Gab takes two damage. Dave played a second Amphibious Kavu and passed the turn to Gab, hoping that the Disciple's flying ability will be enough to snatch back the game.

Gab untapped for his turn, then played an island and activated the Boa again, and the Jungle Barrier considered its job done, blocking the Zombie Snake under penalty of immediate death. Gab ended his turn, and Dave flew over with the Thornscape Battlemage, reducing Gab to a mere two life. Gab asks how many cards are in Dave's hand before untapping, and Dave says "Two cards... they're both good ones". Gab then used Hunting Drake to squat on one of the Kavu, and the Repulse he had drawn to eliminate the other, winning the game.

Dave drops to 6-3, while Gab keeps up a good head of steam, pushing for the Top 8 at 7-1-1 halfway through the tournament.