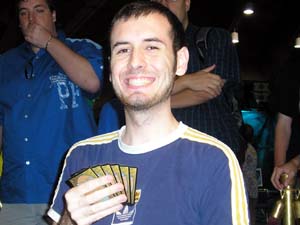 Cimera is having one hot rookie year. Before this year's Extended PTQs he was merely a Friday Night Magic champion better known as btape, Scourge of the StarCityGames.com forums. But after Grand Prix-Seattle, with his first premiere event Top 8 under his belt, Ryan made sure the world stood up and noticed. He followed up with a Top 8 at Pro Tour-Philadelphia, cutting himself an impressive resume as a Constructed player before falling to eventual finalist Kenji Tsumura in the quarterfinals. Ryan is just 16 years old.

What can you say about Bill Stead? A Florida player "from way back," Stead is a Grand Prix Champion and reigning member of the U.S. National team. Brian David-Marshall, a guy who is at every premiere event, gives Stead an even more impressive pedigree: "He has great shirts and great sneakers. I love the red Chuck Taylors that are held together with just a string."

This matchup featured Cimera's red-green creature deck against Stead's blue-white flyers and tricks. A classic Limited matchup if ever there was one, Kamigawa Block has really powered up the strength of the red-green utility creatures, meaning that the elimination-poor blue-white will have to be wily and fast, and win in the air.

Prior to the opening of the match, Bill and Ryan tried to figure out who will go first. "Am I thinking of a number… is it even or odd?" Ryan thought for a moment before reaching for a die.

"Almost got ya," said Bill.

Ryan won the roll and opened with a Forest and Orochi Leafcaller.

Bill had no play until a second turn Floodbringer, so the Leafcaller was good for a point prior to stabilization. "Stabilization" didn't last very long, though, as Ryan had a legitimate bomb on turn three: Elder Pine of Jukai.

Bill passed his next turn, leaving his half-a-flyer back to scare off the 1/1 and potentially trade with the 2/1.

"I'll take the bait," said Bill, who put his Floodbringer in harm's way. The young rookie shrugged his shoulders and summoned Frostling. Frostling's being a Spirit triggered Elder Pine of Jukai before the sacrificial one-drop pointed itself at the wounded Moonfolk Wizard.

"This time I did get ya," commented the veteran. Floodbringer took an Otherworldly Journey and came back a 2/3.

Bill untapped, cracked in the air, and followed up with Secretkeeper.

"I think I passed that," commented Ryan.

"Nah. I topdecked it," was the response.

The next couple of turns were brutal. Ryan summoned Okina Nightwatch but it was met with Heart of Light. He couldn't block the flyers so they came in and in again, racing. Ryan ostensibly should have had more cards in hand, but Bill showcased a nice knowledge of the format interactions, and returned lands to his own hand with Floodbringer in order to keep the Secretkeeper huge.

On turn seven facing down a Soratami Mirror Guard as well as the two flyers he couldn't handle to begin with, Cimera scooped and sent the combatants into Game 2.

Ryan chose to draw this game, and Bill opened with just a Plains.

Ryan had a Frostling to begin with, stealing the initiative for a point. On his second turn, Cimera put Dripping-Tongue Zubera on the stack and asked coyly "Hisoka's Defiance?" 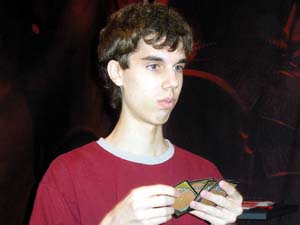 "Thumbs up," said his opponent, and surprisingly countered the Zubera of ill repute.

"I was kidding!" Ryan exclaimed.

By turn four, Ryan was still stuck on three lands but played Traproot Kami with Forest, Forest, Mountain, and Humble Budoka. Bill stopped the Gnarled Mass from trading blows too long with Hear of Light, but he was slightly behind the race: both Humble Budoka and Mirror-Mage have two power.

Knowing that if the Elder Pine started to trigger his Mirror-Mage would soon be contained by Traproot Kami, let alone the fact that his opponent would have a Land Tax working, Bill sacrificed much of his position to bounce it via the Mirror-Mage. Ryan re-played the Elder Pine; the second time it jumped via Phantom Wings.

Bill had been doing a lot of work but had only reduced Ryan to maybe 14 life. On his eighth turn and at 10 life, Bill had to give up on the anti-Elder plan and played Kitsune Blademaster: at least he could hold back the Humble Budoka.

The now lordly landed Cimera summoned quite a five on his turn eight: Kashi-Tribe Warriors. Stead couldn't suppress a chuckle. "I never said my deck was good," smiled Cimera. Good or no, the game had started to slip from Bill.

Over the next couple of turns, both mages started to accumulate more creatures. A Scaled Hulk netted Ryan Forest, Forest, Mountain, which finally put a smile on his face. Bill deployed Kami of the Honored Dead; at the end of Ryan's turn, he tried to figure out where to aim his Consuming Vortex.

"How about my Gnarled Mass?" queried Cimera. The three drop had been sitting under Heart of Light for most of the game. In the end, Bill started to do math with his lands and Soratami activations, unsurprisingly chose Scaled Hulk.

The game was getting critical. Budoka Pupil joined Ryan, and with so many creatures on his side of the table that they were overlapping, Ryan chose to attack with… a lone Kashi-Tribe Warriors.

Bill eyed his life total. Ten. He agonized over the block but finally chose to put Kami of the Honored Dead and Floodbringer. Not surprisingly, Ryan put a point on each flyer, stunning them for a turn. But rather than losing his Snake, Cimera showed Bill Serpent Skin and saved it.

On the critical 14th turn, Bill laid another of his innumerable lands and passed.

Bill only had two creatures on defense and 10 life. It looked like as good a time as any for Ryan to Alpha Strike. In came Scaled Hulk, Orochi Leafcaller, Budoka Pupil, Frost Ogre, Elder Pine of Jukai, Humble Budoka, and the Serpent Skinned Kashi-Tribe Warriors.

Bill then executed his trick. "Before blockers," he said, "Hail of Arrows for nine: Four on Scaled Hulk, three on Frost Ogre, two on Budoka Pupil."

Ryan wasn't through, though. "Path of Anger's Flame?"

The Arcane Instant saved his Scaled Hulk even as it pumped his squad in its entirety. With no good block, Bill sent them to Game 3.

Ryan played his famous Kashi-Tribe Warriors, but Bill had him one better: another 0/2 Inner-Chamber Guard. 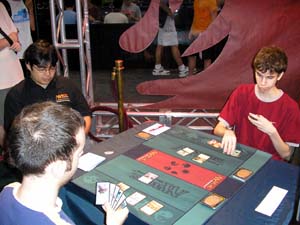 The Guards did their work guarding quite well. None of Cimera's creatures wanted to tangle. Finally, Ryan played Ronin Cavekeeper. I've got a way to bust through, finally, he thought.

But no! Bill dropped Phantom Wings on his Mistblade Shinobi, putting his opponent on a 19-turn clock that kept the fatties off the board turn after turn.

Ryan finally had enough mana to run a Gnarled Massand Frost Ogre, but the Gnarled Mass once again got a Heart of Light. "Usually you put that on the bigger creature… but not this game." Mistblade Shinobi picked Frost Ogre up and deposited him in Cimera's hand.

The rest of the game was academic. Mistblade Shinobi was joined by a couple of flyers, speeding the clock to far fewer than 15 turns. Although he got the haste-enabling Akki Drill Sergeant in play, Ryan couldn't keep up with the race because of that pesky flying Ninja. An Alpha Strike by Ryan was foiled, and finally Bill came in with a tricky Veil of Secrecy on a ground-pounder, stealing a turn and picking up the game.