Round 9: Gerard Fabiano vs. Jon Sonne 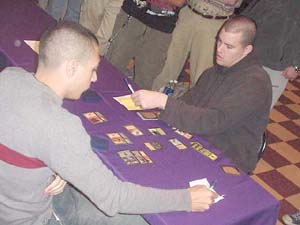 It's "When Teammates Collide" here at GP Philadelphia as two members of Slay Pillage Gerard meet. After making top 4 at Pro Tour Boston and going 6-1-1 during day one of the Grand Prix, both players are looking for the undefeated day two to make top 8. Anything less would be considered a disappointment. Gerard Fabiano is a member of team TOGIT, based in New Jersey. He has had very high individual finishes in the 2001-2002 PT season, including narrowly missing top 8 at PT Osaka. Jon Sonne is another Jersey boy. In addition to his top 4 appearance at PT Boston, Jon has placed highly in several Pro Tours and is the reigning New Jersey State Champion two years running.

Gerard's deck is a very fast r/b monster, featuring multiple copies of Wretched Anurid and Solar Blast. It is a suicide – style deck, where it needs to win quickly or it will be in a bad position. Jon's deck is r/g and solid, but he was being hurt during the draft because the player to his left drafted the same colors. However, Jon did manage to pick up Slice and Dice to go along with some big fat guys. Neither deck contained any true bombs, though, as the table was surprisingly bomb – light.

With teammate Scott McCord looking on, Gerard wipes his hands with his ever present hand rag, and they begin their match.

Jon won the die roll and elected to play. He had a great play for his deck in a turn 2 Wirewood Elf, followed by a turn 3 Morphed creature. Gerard could only muster a turn 3 Swat on the Morph.

Jon kept attacking with the elf, unfortunately not being able to use it to accelerate into any big guys. Along the way, though, he managed to cast a Sparksmith and Shock a freshly cast Morph from Gerard.

Turn 5 presented a major choice for Jon. Gerard tapped out to cast his Prowling Pangolin. The 6/5 beast is big enough that none of Jon's removal can handle it alone, and he would have to give up both his Wirewood Elf and Sparksmith in order to keep the Pangolin off the board. He chose to allow it to live.

With the Pangolin in play, Gerard was able to press the attack. Two quick hits brought Jon to 8, while a Wretched Anurid joined Gerard's team. A Serpentine Basilisk hoped to block for Jon, but it met a Pinpoint Avalanche. A Solar Blast took out the Sparksmith and Gerard was able to attack again. This time, though, Jon had a Krosan Tusker ready to trade with the Pangolin. 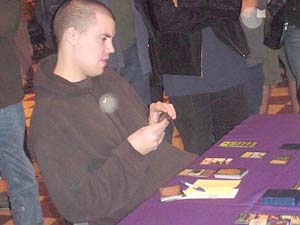 Gerard followed that attack with a Morphed creature, and Jon's 5 life were not looking to be enough. Fortunately for him, he had the Slice and Dice ready to clear the board. A Morph from Jon was quickly Cruel Revivaled by Gerard, recovering Wretched Anurid. The Anurid brought Jon down to 2, and a Shepard of Rot sealed the deal.

Jon sideboarded several cards, trying to make his deck fast enough to handle Gerard's machine. He again elected to play, knowing the advantage Gerard would gain going first. His turn 2 play was phenomenal for the matchup: Elvish Warrior. He kept the curve going with a third turn Leery Fogbeast. Not the best, but it will hit for 4 if unblocked. Gerard fortunately had a Shepard of Rot to hold it back.

Jon kept coming in with the Elf and added a second to the team. Gerard had a Wretched Anurid to hold them off, but Jon kept attacking, cycling Primal Boon to clear out the blocking Anurid. Gerard had his Prowling Pangolin on turn 5 yet again, and this time Jon chose to sacrifice an Elvish Warrior and the useless Leery Fogbeast in order to keep in off the board.

Jon kept up the attack, adding a Symbiotic Elf to the team and bringing Gerard down to 8. Gerard had a sick play in hand: Aphetto Dredging for beasts. This brought back Prowling Pangolin, Wretched Anurid, and a recently killed Spined Basher!

Unfortunately for Gerard, his life total was reduced to a precarious 4 by Jon's next attack, and no creature would be enough. He tapped 6 to fake a Slice and Dice, but just packed it in.

Gerard chose to go first this game, and it is expected to be a huge advantage. His turn 2 Shepard of Rot and turn 3 Wretched Anurid were only met by Jon's Morphed creature. He quickly brought Jon to 12, and kept things going with a turn 6 Prowling Pangolin. Jon had a Sparksmith and a Symbiotic Elf ready to make the ultimate sacrifice, though, and the Pangolin did not remain. 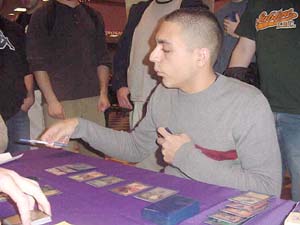 After Gerard summoned a Morphed creature and trading his Wretched Anurid for Jon's recently summoned Elvish Warrior, the board was relatively even: Gerard had Shepard of Rot and a Morphed creature while Jon had two insect tokens. Both players were at 8 life and had 3 cards in hand.

Jon summoned a Serpentine Basilisk and a Morph, then attacked with his insects, bringing Gerard to 6. Gerard used Aphetto Dredging to recover the Pangolin and Wretched Anurid, and he recast the Anurid. Jon chose to trade the Basilisk with the Anurid, but not after Jon was able to summon 2 more creatures while it was in play, bringing Gerard to 4.

Looking at lethal damage, Gerard got desperate. He had to try to burn Jon out. He sent solar blast to the head, activated Shepard of Rot, and hoped to draw into Shock, but it wasn't there for him.

1 Slice and Dice 1 Wave of Indifference