Round 9: Gerardo Godinez vs. Juan Aros This Round 9 Feature Match pitted Mexican superstar Gerardo Godinez, who, among many other accomplishments, attended the Invitational last year in Sydney, Australia, against Juan Aros, who came into this tournament with no byes and was looking good at 7-1.

Gerardo won the die roll, and elected to play first. He was playing a Blue/Black/Red Control deck, and Juan was playing a Red/Green Aggressive deck. Gerardo led with a Salt Marsh followed by a Turn 2 Nightscape Familiar, while Juan played a Turn 2 Blurred Mongoose. On Turn 3, Gerardo played a Lobotomy on Juan, having the choices of Flametongue Kavu, Urza's Rage, and Raging Kavu, also seeing 3 lands in Juan's hand. He chose to take the Urza's Rage, and on Juan's next turn he played the Raging Kavu and attacked with both of his creatures. Gerardo blocked the Blurred Mongoose with his Familiar, and the two creatures traded. Gerardo merely played a Salt Marsh and passed the turn, but he still had plenty of gas left in his hand, casting a Terminate on Juan's Raging Kavu and then on the following turn cast another Nightscape Familiar and another Lobotomy. Juan cast Scorching Lava in response on the Familiar, and the only cards left in his hand were a Flametongue Kavu and a land. Gerardo removed the remaining Flametongue Kavu from Juan's deck and passed the turn, appearing in a rather good position at 17 life with his opponent having only a Thornscape Familiar and no cards in hand on the board. 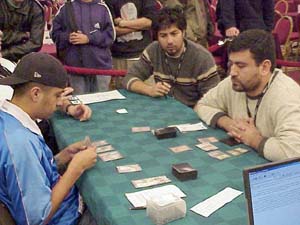 However, over the next 2 turns, Juan drew a Blurred Mongoose and a 2nd Familiar, which was Undermined, but was finally able to get some damage in with his 2/1s. On Juan's next end step, Gerardo cast a Fact or Fiction, revealing Recoil, Repulse, Salt Marsh, and 2 Islands. Gerardo took the Repulse and Salt Marsh, and with only those 2 cards in hand, Juan appeared to be back in the Game, as the Blurred Mongoose was causing a great deal of trouble for Godinez. However, Gerardo showed the Mongoose how things work in the land of B/R/U with a Void for 2, killing both of Juan's creatures. Juan drew a 3rd Blurred Mongoose on the next turn, and the turn after that he drew a Ghitu Fire, attacking Godinez to 3 and attempting to Ghitu Fire him for 3. Godinez had the Undermine for the Fire, but the Mongoose was still causing problems for Godinez, who was on a precious 3 life. On Godinez's next turn, he cast a main phase Fact or Fiction, revealing Lobotomy, Exclude, Prophetic Bolt, Swamp, and Shivan Reef. Godinez took the Lobotomy, Exclude, and Land, and on his next turn, at 1 life, cast a main phase Prophetic Bolt searching for something to deal with the Mongoose. He found nothing, and conceded.

For the 2nd game, Gerardo sided in 4 Ravenous Rats and 2 Fire/Ice, taking out slow cards like Lobotomy and Yawgmoth's Agenda. Juan decided not to sideboard in anything, and Godinez chose to play first for Game 2. While Juan was shuffling his deck, he broke one of his sleeves, and the Judge decided to take a look at his deck as his sleeves looked very old and may be marked. After a 15 minute deliberation with the head judge, they decided to give Juan a Match Loss because his sleeves appeared that they may have had a marked pattern.