Round 9: Gotham's Finest Face Off

These teams met on this second round of the second day full of confidence and bravado. Friends all, it was clear these competitors had a lot of respect for their opposing number. At 6-2 coming into this round, both teams were in rarefied territory, and everyone knew a Sunday appearance was definitely ripe for the taking. Despite a lot of friendly banter back and forth, both groups had their serious game on, as they and the spectators knew this was a very important round.

Craig rolled a 19 on the d20, prompting a high-five from Paul, until he dipped his hand back at the last second. Snap! Paul, feeling guilty over the burn, offered a hand shake and wished his opponent good luck. 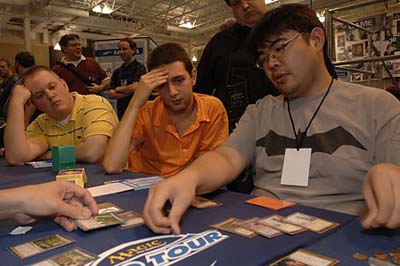 Mike foreshadows his deck with his wardrobe.

Both players mulliganed, keeping their next six. Each player was running the multi-color land destruction strategy, a popular choice for this Pro Tour. Craig was using Utopia Sprawl, which made him more vulnerable to opposing land destruction but accelerated his chances of casting his first. In practice, Craig had the Sprawl but was short a third land to start playing his LD spells. Paul had cast Demand for Wrecking Ball the turn before, but was short a black mana needed to cast it.

Both Paul and Craig knew a black source off the top was going to give Craig's chances serious fits. Unfortunately for Paul, the top card was an Azorius Chancery. Paul merely played the bounce land and passed the turn back. Craig wasted no time in casting Rolling Spoil and Wrecking Ball, then a Compulsive Research to refill. Paul was stuck on lands when his opponent played two Simic Sky Swallowers. Paul counted his mana (four), checked his life total (12), and packed it in.

Elsewhere on the table, Steve Sadin and Billy Moreno were dueling in a classic control vs. aggro match. Steve had the stock red-white-blue Firemane Angel deck. Billy's deck was a bit more scattered, with access to all five colors and a multitude of burn spells and cheap, efficient creatures. Billy tried a slick play in the first game, casting an Experiment Kraj off a Blood Crypt and Sacred Foundry. When Billy's opponent pointed out the mana discrepancy, Billy sheepishly replaced Kraj with a Mistral Charger, then another.

One Charger was taken out by a Demonfire, but Steve had nothing to handle the turn-four Giant Solifuge. A couple hits of the insect combined with Seal of Fire was enough to give Billy the first.

In their second game, Billy lost his first two creatures, a Scorched Rusalka and a Mistral Charger, to an Electrolyze. Double Skyknight Legionnaire came down to replace them. With a board of Boros Garrison, Boros Garrison, and Island, Sadin passed the turn back to Moreno. Billy untapped and looked at Steve, looked at his two Skyknights and attacked with only one. Steve seemed annoyed, but cast the Ends half of Odds//Ends anyway, achieving a mere 1:1

"Billy is so good! I would have lost a ton of guys there," Krempels said. "Well, two, but that's all of them," after which he shared a high-five with Paul over Billy's talent.

Unfortunately for Moreno, despite his quality poker skills, his deck was fast running out of threats. Billy lost the Skyknight Legionnaire and could only manage a Hit on Steve's Tibor and Lumia. Unfettered by Billy's aggression, Steve drew lots of extra cards and burned Billy out in a hail of Lightning Helix and Demonfire.

Meanwhile, Mike Flores and Jon Sonne were having an intense and lengthy first game. Jon was playing a Leyline of the Meek deck, one of the sleeper cards in Ravnica block constructed. Combined with some of Selesnya's best token producers, Jon's deck could produce a steady stream of 2/2s and 3/3s. Mike was with his Orzhov deck, a build he declared had only lost a single match since the tournament began.

Jon's deck was hamstrung by the matchup this time. Mike's deck also ran plenty of token producers, with Skeletal Vampires and Belfry Spirit, so much so Leyline of the Meek had to stay in Jon's hand. Despite their lack of enhancement, Jon's deck was still able to produce a steady stream of creatures through Selesnya Guildmage and Vitu-Ghazi, the City Tree. Mike had the edge in fliers, but any big attack resulted in far more creatures coming back at him. A Ghost Council gave Mike a little breathing room and allowed him more outlets for Haunt effects.

Back and forth the competitors went. Pontiffs from Mike's side were met with a casting of Supply or another Selesnya Guildmage from Jon's. A late-game sequence of Pontiff and Mortify gave Mike the window he wanted and attacked with all his creatures. If Jon could survive the attack, Mike's low life total could be his downfall. It looked good for Jon when he cast Scatter the Seeds, leaving Jon at two life but with enough creatures to attack back for the win. Unfortunately for Jon, Mike finished his turn with Blind Hunter, stealing the last two points and the game. Time left on the clock: 30 minutes.

The 4/3 flying first striker's upkeep ability wasn't useable, but the Angel was still capable of beating any single creature on Billy's side of the board. Billy, with his Scorched Rusalka and Rakdos Guildmage, had a permanent source of damage available. Steve was able to cast a second Angel, allowing his first to attack, and the race was on. Said race took a turn for the destructive when Steve's next play was Tibor and Lumia combined with Electrolyze. That sequence wiped away every creature on Billy's side of the board, and allowed the two Angels to finish things up.

With the Sadin match resolved in his team's favor, Mike decided to speed up his play for the second game. Jon didn't give him much choice, with a blisteringly fast opening, ending with a kicked Seed Spark on Mike's Orzhov Signet and a Scatter the Seeds. Mike fought on, but the loss of the second black mana hurt his hand considerably. Mike found an Orzhov Basilica and began to re-assert his board position, but was still very low in life. 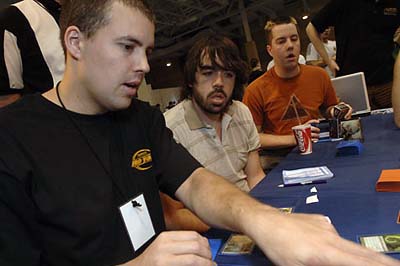 Moreno and Krempels look on as Jon evens things with Mike.

When Glare of Subdual hit play, Jon was able to start pushing damage in again, so much so Mike was forced to Mortify a Watchwolf instead of the Glare. Vitu-Ghazi continued to make little tappers, and despite a brief discussion about the tap-status of squares of paper, they're enough to win the second game.

Craig and Paul were continuing to discuss team constructed's intricacies through their match.

Paul: "My big move was to learn how to shuffle in the opposite direction, so their team can't see my cards."
Craig: "[This format] is like marriage counseling. You have to be able to look your partner in the eye and say 'I trust you.'"

On the play, Paul kept his opener while Craig's hands forced a double mulligan. A Compulsive Research from Craig restored the balance somewhat, but Paul was doing his own dance with mana fixing and land destruction. Craig was content to make Vitu-Ghazi tokens and watch his lands get blown up, until he played an end-step Life from the Loam.

When Craig pointed out Life from the Loam was sorcery, Paul looked embarrassed and made a saproling instead. Next turn the Life from the Loam was cast, returning three of Paul's destroyed lands to his hand. Craig could only shrug as the turn after saw Paul Jordan's Simic Sky Swallower come down. When he was at very low life, Craig cast a Skeletal Vampire, hoping to stem the beats somewhat. Paul cast an enhanced Rolling Spoil on a Breeding Pool (with Utopia Sprawl, natch) killing all the bats and allowing SSS to come through for the win.

For their final game, both players kept their initial seven. Craig started with a Utopia Sprawl and Farseek, which led to a Wrecking Ball and two more Farseek. Craig had a Signet and Farseek of his own, and aimed a Wrecking Ball at the Sprawl-enchanted Forest. Craig looked frustrated to be denied his seventh mana and passed the turn. Craig could merely play a Golgari Rot Farm and pass it back.

Next turn Craig hit his seventh land, cast the seven-mana sorcery Wit's End, and sent all seven cards from Paul's hand into the grumper. Paul seemed taken aback by his new Hellbent status, but fought back gamely enough with a dredged Life from the Loam and a recovery of some lost lands.

Unfortunately for Paul, one of his lost cards was an Angel of Despair, which soon committed the capital Crime of treason. Popping a land, it died next turn to Paul's topdecked Wrecking Ball. Craig showed his own topdeck capabilities, casting another Crime and destroying another of Paul's mana sources. Paul could only look on helplessly as the turncoat Angel came in for five points a turn. A Skeletal Vampire sealed the deal.

Once again the round result came down to the capable shoulders of Mike Flores. Time was running out in his match with Jon Sonne, with both decks capable of winning quickly or mightily gumming up the ground. Mike's big decision was in turn zero, with a hand of:

A powerful hand against Jon, but of course missing a key color. As the clock ticked down, his teammates were split on the mulligan decision. Mike decided it was too powerful to throw back and kept it. Jon had no debates, instantly shipping his first hand for the next six.

Mike ended up drawing a Plains and missing a land drop. Jon was able to play some token producers, but Mike found a black source and went to town. Culling Sun took out Selesnya Guildmage and Birds of Paradise, while a Pontiff eliminated the next crop of creatures. At this point Mike was in a commanding position with Blind Hunter, the Orzhov Pontiff, and Ghost Council. Jon Demanded a Glare of Subdual, hoping to stall the game out with the last few minutes left on the clock.

Mike had none of that, crushing Glare with Mortify and casting another Pontiff to wipe out the rest of Jon's tokens. With nothing in play facing Mike's horde of haunted haunters, Jon had to give the match to Mike.