Round 9: From the Heart

Starting off the second day of play, there was one undefeated player, the German Fabian Thiele. His opponent this round had already crushed Gaudenis Vidugiris's hopes of finishing undefeated in the final round of play yesterday. Would he be able to stop Thiele from continuing his undefeated streak, or will Thiele stop Fujita from playing spoiler?

Fujita started with a Gremlin Mine and an Immolating Souleater off a pair of Islands. Unfortunately, that was all the lands he had. Thiele seemed incredulous when Fujita passed the turn back to him without playing a third land. Thiele drew some more cards with a Tezzeret's Gambit, eventually discarding a Steady Progress he hadn't shown an Island yet, so it was clear that he was digging for one. Fujita managed to find that third land on his next turn, adding a Snapsail Glider to his team. His attack dropped Thiele to 16. 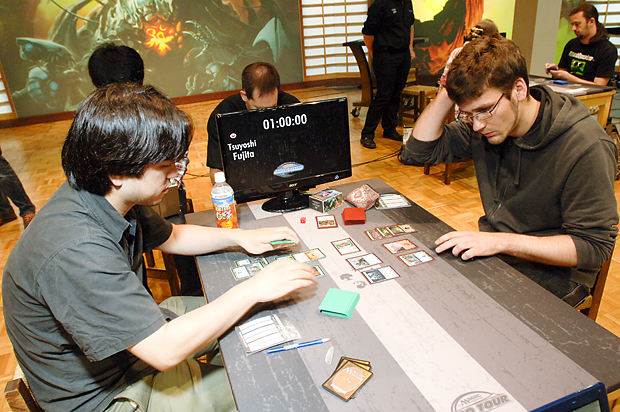 Tsuyoshi Fujita faces down an unidentified man whom our sources identify as the undefeated Fabian Thiele.

After playing an Island, Thiele was able to play a Necropede and a Riddlesmith, slowing down Fujita's attacks. All Fujita could do was make a Strider Harness and attack with his flying Glider. He couldn't even equip it first since he had not found a fourth land. Thiele was more or less in control now, adding a Vedalken Anatomist to his team. With the Anatomist, Thiele was able to keep the Glider locked down while he slowly killed it.

Fujita finally found his fourth land, but he had nothing to do with it, simply passing the turn back to Thiele. The German player was in complete command now. A Pith Driller killed Fujita's Souleater, which left him with no creatures. All he had was a second Strider Harness without someone to carry it. A Trigon of Corruption from Thiele gave him yet one more avenue of control. Fujita slowed the bleeding by killing Necropede with the Gremlin Mine, but Thiele chose not to use the ability. When Fujita finally managed to find a Mountain, he killed the Driller with an Oxidda Scrapmelter, but Thiele still had it locked down with the Anatomist. A Gitaxian Probe into Fujita's hand revealed a Whipflare, Spire Serpent, Blisterstick Shaman, and a Sky-Eel School.

With the time now ripe, Fujita used Whipflare to clear all but the Necropede Thiele had just played to replace his first. Unfortunately, he forgot to equip his second Harness to his Scrapmelter first, and it died to the Whipflare along with everything else. After nearly wiping the board, Fujita completed the job with a Blisterstick Shaman, which traded with the Necropede. Thiele filled the skies afterwards with a Lumengrid Gargoyle and a Thrummingbird. Fujita made a Sky-Eel School, equipped it, and attacked, taking Thiele's Gargoyle down. Thiele swung back with his Thrummingbird, raising Fujita to four poison and giving his Trigon of Corruption another counter. After combat, he made a Pestilent Souleater.

Fujita had managed to poke through for a reasonable amount of damage, especially combined with the early Phyrexian-mana use by Thiele. His life total was 9. When Fujita made a Trespassing Souleater and equipped it with both Harnesses, Thiele fell to 5. When Thiele swung back, he chose not to activate his Souleater, content to drop Fujita to seven and five poison. Fujita tried to end the game with a Vulshok Heartstoker to pump his Souleater, but Thiele stopped it with Psychic Barrier. Instead, Fujita made a Phyrexian Metamorph to copy Thiele's Pestilent Souleater and attacked Thiele down to 3 with his Trespassing Souleater. Rather anticlimactically, Thiele untapped and aimed a Red Sun's Zenith at Fujita, prompting him to laugh.

Thiele started on the first turn with a Gitaxian Probe, revealing a pair of Trespassing Souleaters, a Snapsail Glider, a Silver Myr, a Strider Harness, and a Mountain. Apparently Fujita drew very well, because his next plays were Silver Myr into Harness into Glider, playing two lands that had come from the top of his deck. Thiele had found a Spin Engine and a Pith Driller to kill the Silver Myr, temporarily grounding the Glider, but a Trespassing Souleater from Fujita lifted it right back up. It picked up the Harness and swung in alongside the Glider, knocking Thiele to 8. Thiele swung back with his Spin Engine, and left five mana up. He had a Psychic Barrier to stop the second Souleater from Fujita, but he had to eat the attack, dropping to 3.

Thiele swung in with his to creatures, one turn from death. That dropped Fujita to six. After his attack, Thiele tapped out and cast Life's Finale, which got an "Oooh" from Fujita. While he was looking through Fujita's deck, though, Fujita flashed the Vulshok Heartstoker that was going to hastily end the game on his turn. Thiele nodded and took careful note of Fujita's deck before conceding.

Fujita started the final game with the same Silver Myr he'd managed in the second game, but Thiele had a Psychic Barrier to stop it. A Vulshok Heartstoker came down unabated, but didn't have anything to pump. When Thiele didn't play anything on turn four, Fujita knew something was up, simply attacking with his Heartstoker and passing the turn. He made a Blisterstick Shaman to hit Thiele on the following turn, but he clearly didn't want to run afoul of Life's Finale. Thiele made a Spin Engine to trade with the Heartstoker, forcing Fujita to add one more creature to the board, an Impaler Shrike. Thiele made a Flayer Husk to stop the Shaman and killed the Shrike with Red Sun's Zenith. He still hadn't played a second Swamp, but he appeared to be setting it up for Fujita to overextend into the Finale.

Fujita had to keep committing cards, but they weren't going to be creatures if he could help it. He used Victorious Destruction to kill the Flayer Husk and attacked. He did end up adding a second creature in a Sky-Eel School, and that was all it took for Thiele to end it with Life's Finale. Picking up Fujita's deck, he denied him his Oxidda Scrapmelter and a pair of Trespassing Souleaters. Afterwards, Thiele added injury to injury with a Tezzeret's Gambit.

Thiele tries to take it home.

Fujita had held onto some goods, including the Spire Serpent and Gust Skimmer he cast on his next turn. Thiele got a better idea of things to come with a Gitaxian Probe, revealing Concussive Bolt, Whipflare, and Vulshok Heartstoker. Ultimately, all Fujita needed to take the match was his Vulshok Heartstoker, adding more threats than Thiele could deal with, as well as pumping his Gust Skimmer. Within two turns, Thiele was dead.