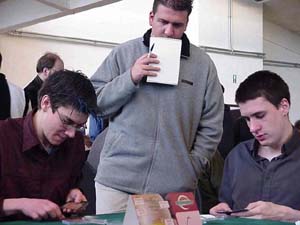 "No, not a feature match", lamented Jan Doise at the start of the round. "I'm 0-8 in feature matches". Online coverage really seems to influence Jan's performance. Yesterday, his sealed deck was considered to be an 8-0 deck but when Cathy Nicoloff wrote an article about it, Jan promptly went 0-2.

Both players are currently at 6-2 and need to win the table to have a shot at the top 8. More is at stake for Jan though as he has to defend Belgian pride. Only six Belgians made day 2.

Jan won the die roll and chose to draw first. Jelger came out fast this game with a Diligant Farmhand and an Escape Artist in the first two turns and a Dreamwinder on turn four. Jan stabilized with a Militant Monk and a Resilient Wanderer and then played his Skywing Aven.

The thing is, Jan took a Skywing Aven over Llawan in his Torment pack and whereas Llawan would have easily won him this game, Skywing Aven is just not that impressive. Jelger then proceeded to topdeck Llawan.

"And this should have been a Skywing Aven."

Llawan-protected Escape Artist beatings proved too much for Jan and the first game went to Jelger.

Jan decided to play first this game, impressed by Jelger's fast start last game. This turned out to be a wise decision as Jelger once again came out blazing with a Basking Rootwalla and a Seton's Scout.

Jan was able to prevent being overrun with a Mystic Zealot, Hydromorph Gull and....his Skywing Aven. Jelger couldn't help but chuckle as he looked down at his board of Aven Windreader and Aven Fisher who would've been more impressed by Llawan than by Skywing Aven.

Jelger then put insult to injury by topdecking Llawan again sending all but the Zealot home. A Ghostly Wings on his Basking Rootwalla later Jelger took the game and the match.