Round 9: Jeff Cunningham vs. Frederico Bastos 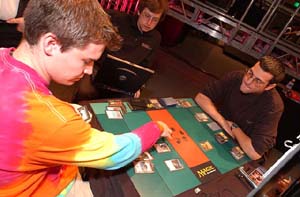 After tearing up Pro Tour - San Diego to finish in the Top 8, these two combatants are proving they can hack it in constructed formats as well. Canada's Jeff Cunningham is running an aggro green deck that touches blue for, get this, Ghostly Wings! Apparently his knack for comedy has bled into his deck construction. Bastos is running a fairly humdrum Psychatog deck, but is a friendly individual nonetheless.

Cunningham jumped off the starting blocks, riding a mana curve of Diligent Farmhand, Wild Mongrel and Call of the Herd. Bastos had Compulsion working, and an Aether Burst to stop the elephant, but couldn't quite stem the tide. Cunningham made another Call token, and now Bastos was in trouble.

Bastos did his best to power through his deck, but it continued to cough up Standstills instead of action. He fell to seven. Peek revealed that Cunningham had Ghostly Wings in hand. Bastos made a Zombie Infestation and hoped that Cunningham wouldn't decide to kill him.

He hoped in vain. The Wings hit the Mongrel and the whole team smashed in. Bastos made a token and blocked, but Cunningham simply pitched cards for the kill. 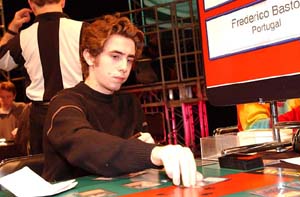 Bastos kept a hand of Chainer's Edict and Innocent Blood that was quickly invalidated by Cunningham's double-Chatter draw. Soon Bastos had spent his resources and Cunningham had a pair of Call tokens beating down.

Fortune smiled upon Bastos, serving up a Psychatog. Cunningham continued to frustrate him with Narcissism. Bastos couldn't risk blocking, and so fell to ten. His next draw was Compulsion, also substandard. There was plenty of trouble already on the table.

And it wasn't showing any signs of stopping. Cunningham poured creatures into the fray and Bastos was powerless to stop him.